I think I mentioned that the horse dentist has been out a couple of times recently. It was Ogie's turn to be done last week and I removed his cribbing collar when it was his turn to have his teeth floated. After he was ready to go back outside I started to put his miracle collar back and on and then I thought, what the heck, I'll try one more time to leave it off.

Ogie has lived with us for a few years and his person told us when he came that he was a very devoted cribber. Ogie definitely lived up to that description! However, as long as he had his miracle collar on he didn't even attempt to crib. I tried a few times during his first year to take off the collar but literally the second I would take it off he would walk over to the nearest solid object (the fence, a bucket, the run-in shed - anything would do) and start cribbing. And he would stand there for hours and crib and crib and crib. As soon as you put the collar back on he would stop and not even try again. So I gave up on Ogie ever going without his collar. 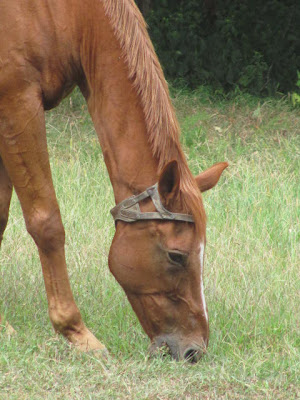 I'm glad I decided to give it one last shot without Ogie's collar last week. I have not seem him crib a single time, even when he is standing near the fence. It has been a full week with no collar and no cribbing. Given that Ogie is in his late 20's and was such a devoted cribber I am very pleasantly surprised. Of course now that I've put this out there on the world wide web I'll walk outside tomorrow to see him cribbing away. I hope not because as cute as the grumpy old man is (I say that very affectionately) he is even cuter without his collar on. Keep it up Ogie!

In other news I've had my share of wildlife interactions the last few days. Almost every afternoon this week I've seen the same three deer grazing in the pasture that borders the pond. The deer are not nervous about the horses at all, and for that matter the horses aren't nervous about the deer either. They all graze quietly. 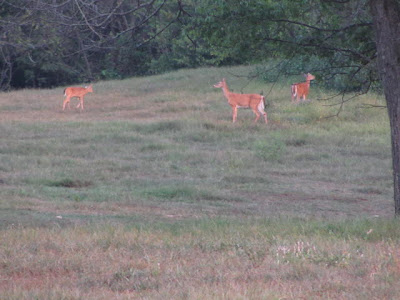 While waiting for the horses to finish eating their dinner in that same pasture yesterday I was leaning against the fence and just enjoying some tranquil moments. The water troughs happened to be in my line of site. In most of the pastures I have both a hundred gallon trough and a small 40 gallon trough. I do this so that if the a horse decides to park him/herself next to one of the troughs and take a nap the other horses can just go get a drink from the other trough.

As I was leaning against the fence while the horses were eating I watched this squirrel confidently walk up to the little trough, climb up the side and hang over the edge and help himself to a drink. Then he quietly walked away under the fence line and climbed back up his tree. I don't know if he didn't notice me standing a few feet away (I wasn't moving and was being quiet just enjoying a few minutes of down time) or if he didn't care about my presence.

Speaking of water if someone could send some rain our way that would be nice. We have not had measurable precipitation in a full month. The pastures were holding up surprisingly well but finally the green is fading and the brown is starting to show up. I'm not sure why it suddenly just decided to stop raining and I would really appreciate it if it would start again! The funny part is the new farm has had plenty of rain, in fact it poured rain there for awhile today.

I hope everyone has a nice weekend, as always Jason and I will be busy!

Updated picture of the barn with the run-in to the right; the exterior just needs to have the doors and the shutters hung. 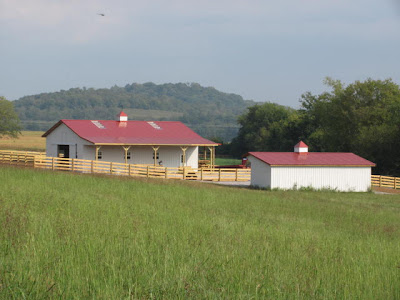 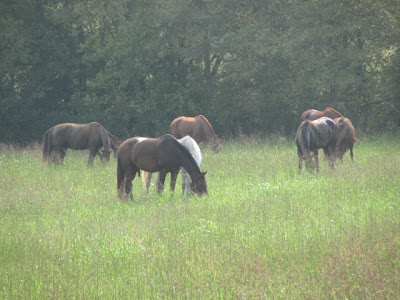 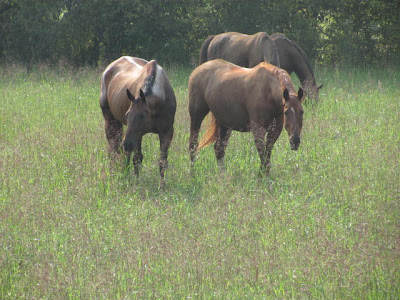 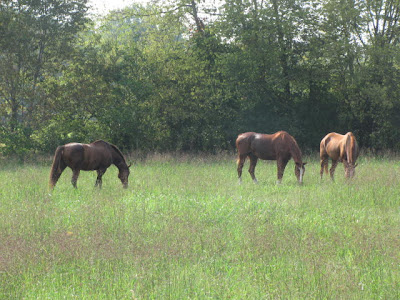 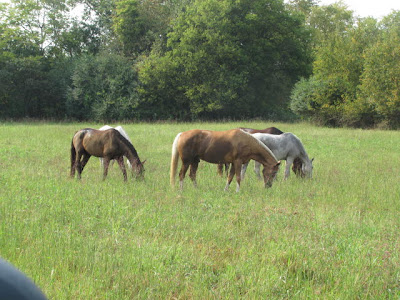 Slinky on the run 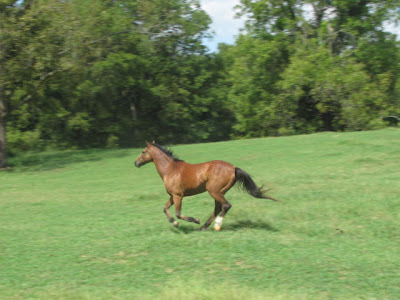 He was followed by Lucky, Lightening and O'Reilly 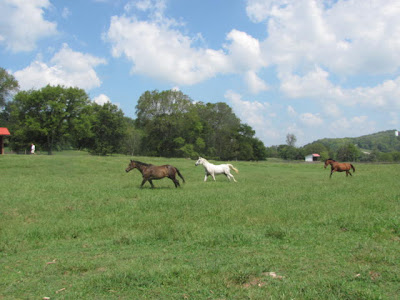 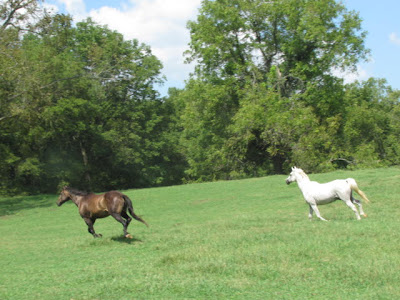 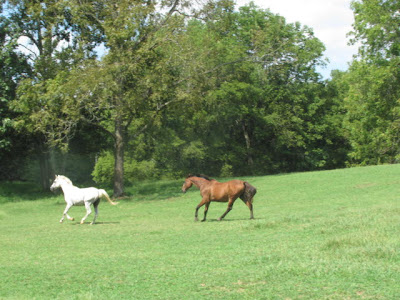 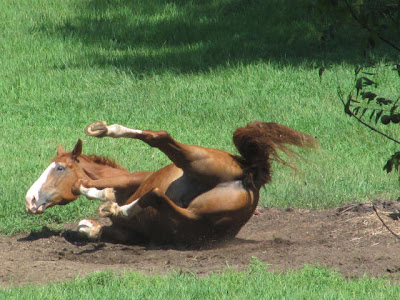 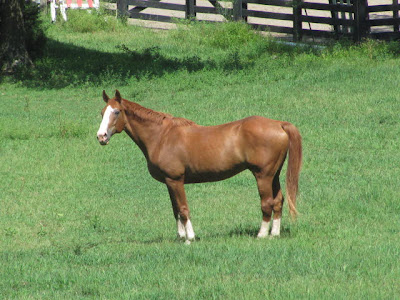 Jason hanging out with Cuffie, Lily and Harmony 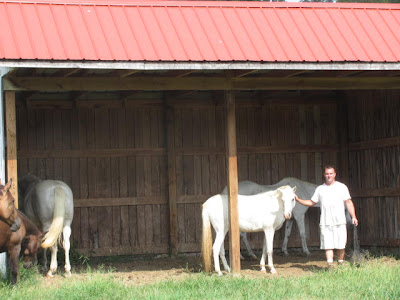 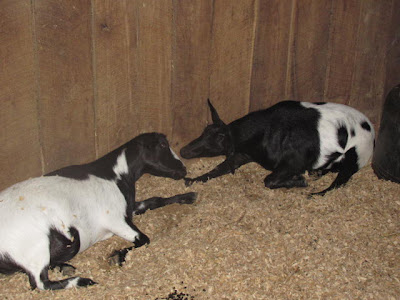 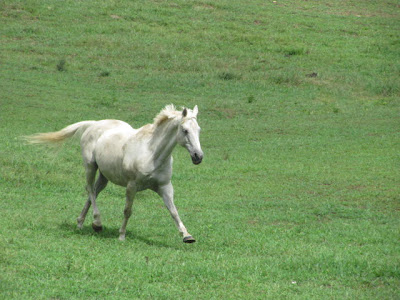 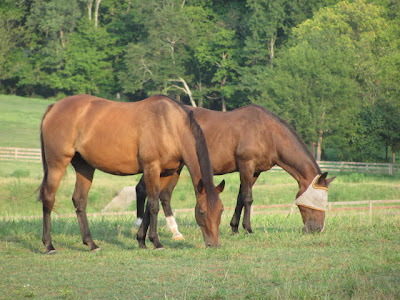 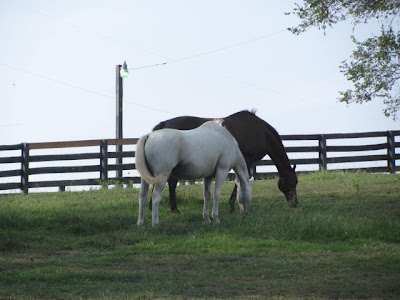 Posted by Melissa-ParadigmFarms at 8:47 PM

Our area is, apparently, a weather vortex. I rode straight through the afternoon, and when I went home around 7, I crossed 96 and there were puddles!!

OMG my horse is concentrating on his roll SO HARD in that photo, that his lip is poking out, lol.

I miss my big guy so much these made me cry - but happy tears!

Love you all,
gillian

Great pictures, as always! Noble had to wear a cribbing collar for many years. We were able to take it off by moving the water buckets in his stall to the ground - he used to crib on them. He rarely would crib outside - sometimes on the fence while waiting to come in from dry lot. I never saw him crib in the pasture. Fred, on the other hand, will crib anywhere, anytime, and has to wear his collar 24/7.

Your new place looks gorgeous. What horse would not think they landed in heaven! No more cribbing collar has to be quite a treat.