Murphy is a 17 hand chestnut thoroughbred who moved to our farm from Louisiana. Murphy and his mom competed through the Intermediate level in eventing. He has the cutest crooked blaze on his face and it works so well with his mischievous personality. Murphy is the perfect name for this horse!

Murphy's mom purchased him in 1999. Murphy was originally destined for the race track and even has a lip tattoo but he never actually made it to a race. He had never evented when he was purchased by his mom but she saw something special in him from the moment they met. 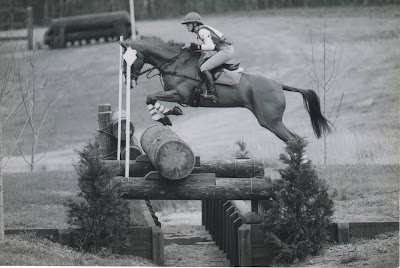 Murphy's mom had received a small inheritance from a relative and her plan was to use the money to purchase a horse. Somehow she ended up trying Murphy and she knew he was the horse for her. The only problem was his asking price was twice as much money as she had to spend.

Murphy with his adorable crooked blaze 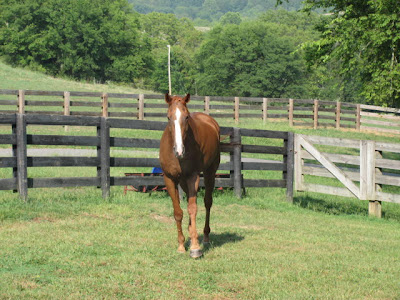 Murphy's grandmom told me that her daughter was so worried that she was not going to be able to purchase Murphy. Apparently she instructed her mom not to wash the t-shirt she had been wearing at the barn because it smelled like Murphy and had his hair on it and she wanted to make sure she could remember him forever. (I'm pretty sure I was equally as dramatic about anything horse related with my mom as well!) 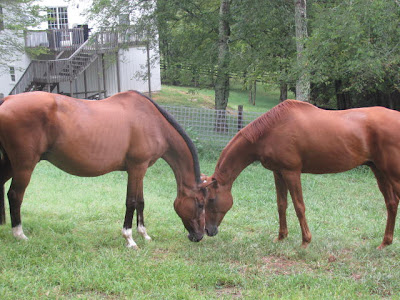 Fate was on their side however as the sellers agreed to take her offer. She and Murphy began competing in eventing and they moved up the levels together, ultimately competing through the Intermediate level. She and Murphy have a lot of impressive accomplishments together but their biggest achievement is probably competing at the North American Young Riders' Championships a few years ago. It is a huge accomplishment to make a Young Riders' team. 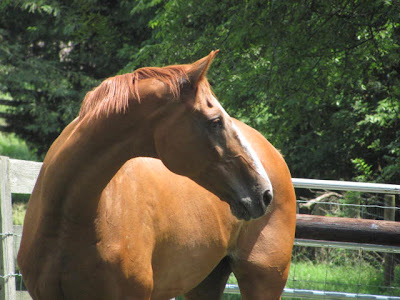 Eventually riding and competing had to take up less time as Murphy's mom concentrated on school. She is currently a doctoral candidate and a few months ago had to move several states away for her residency. She made the hard decision not to take Murphy with her as she was moving to New England where the winters would be much harder plus she was going to be so busy with her residency. We were the lucky beneficiaries of that decision!

Dutch and Murphy were very curious about something 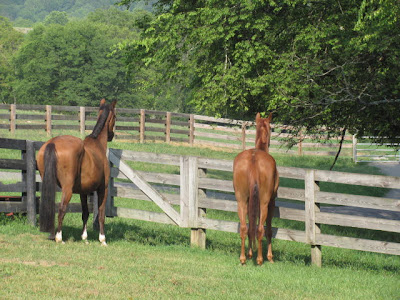 It is easy for me to see why Murphy was so good on those huge cross country courses. He has a lot of self confidence and walks around with a swagger. I'm sure he was not the least bit intimidated by any of those cross country jumps. He definitely believes that the world is his oyster and he has the tiger by the tail!

I sometimes wonder if the horses ever compare notes and talk about what they used to do (of course now they live the life of luxury and spend their mornings at the pool and their afternoons on the golf course). Does Chili tell Murphy what it was like to work cattle while Murphy describes running and jumping cross country, and then Dutch jumps in and talks about dressage? Things that make you go hmmm . . . !
Posted by Melissa-ParadigmFarms at 8:38 PM

He looks very serene, and as you said, confident!

My lady loves Murphy's profile! Another lucky horse to live with you in horse retirement!

Wow, his owner can really ride! What a gorgeous, correct pic of them flying over that jump! His rider is tight as a tick over that huge obstacle! Beautiful leg position. And look at him soaring right over...amazing.

I can hear the conversation now.
"Here she comes. I am going to lay down flat and play dead, you start limping. And when she runs in here, I'll jump up and we all bolt away."
Such a handsome boy. I need to get back into farm life, I miss the horses and being outside.