As most of you know Jason's education and professional experience is in large animal nutrition. To say the least he is a handy guy to have around the retirement farm! Jason has developed many contacts in the nutrition field over the years. A few weeks ago a professor from Cornell University that Jason has worked with before asked if he could bring a camera crew to our farm to get some footage for a video he is working on that will be about feeding horses.

Bear did NOT understand why he wasn't an integral piece of this production. He tried to make himself a part of it anyway. 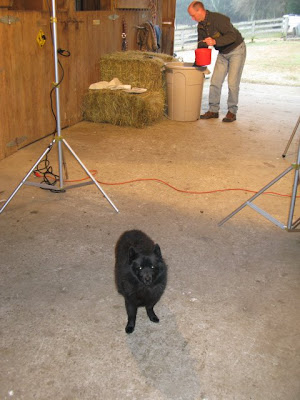 Of course the first thing that went through my mind when I heard this wasn't "that's neat!" but "can't he find any horses closer to Cornell than middle Tennessee?" As it turned out the production company he is working with is based out of Nashville, and it was cheaper for Charlie to fly here than for the crew to travel to Cornell.
Arranging all of the lights around Henry 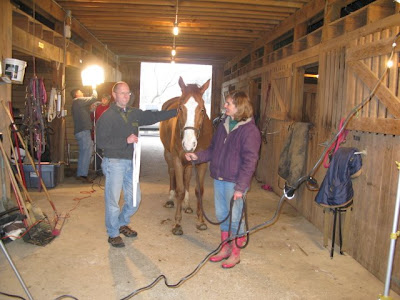 Henry on camera; he was perfect and stood very still with his ears pricked the whole time. Those acting classes really paid off Henry. 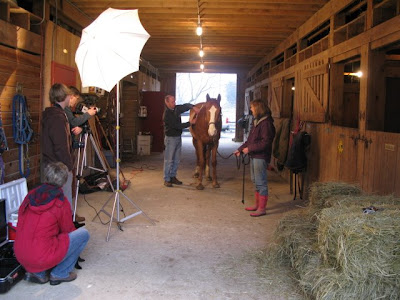 First they did quite a bit of filming that did not involve the horses. Charlie was demonstrating how to take core samples from hay bales using a core sampler. My favorite part of that was when Charlie's core sampler was not functioning properly and Jason came to the rescue with his own sampler. Jason has the super deluxe $300 bale sampler while Charlie had a cheaper one and Jason enjoyed poking some fun at him about that. So the cameras stopped rolling while Jason used his core sampler to pull samples from the hay bales and then transferred the contents to Charlie's so it would look like he had pulled the sample himself.
Charlie emptying the contents of his core sampler into a baggie to be sent off for testing. Of course it was actually the sample that Jason had to pull for Charlie with his own sampler. 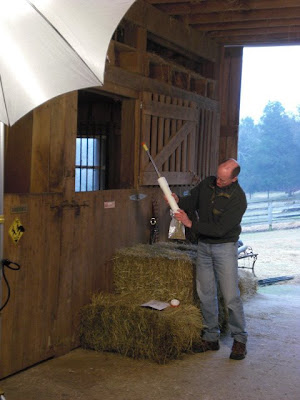 Then they filmed some other things like using the little hand held scale to weigh your feed and weigh your hay. As Charlie pointed out they are all basic things that everyone who feeds a horse should be doing but most don't. We got a gold star on our farm as Jason keeps a scale hanging right next to the feed room in the barn. Yes, we know exactly how much a "scoop" of each and every feed we ever use weighs. I have to say the term "scoop" drives me crazy. When I ask people about their horses current diet so I know what they are used to eating when they arrive it is always described in scoops of feed and flakes of hay. Do people not realize how many different sizes of scoops there are, and that the amount of hay in a flake varies widely depending on the type of baler used and how tight the person operating the baler set the tension? So a scoop and a flake tell me nothing about how much a horse was actually eating. Anyway, getting back on track . . . !
Charlie weighing the bucket of feed with the little hand-held electronic scale 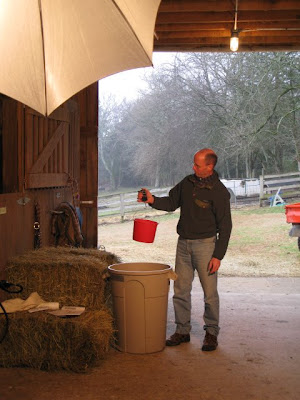 Henry watching with a lot of interest 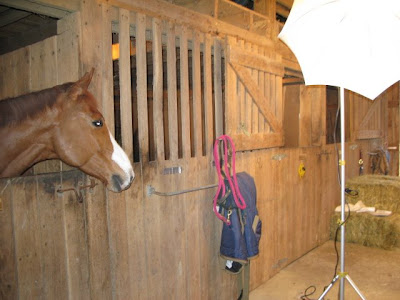 While the non-horse parts were being filmed Asterik and Henry, our demo horses for the day, went through "make-up" and were prepared for their starring roles. I was very impressed with how little they cared (none) about the lights, the cameras, the crew, anything. Clearly they both felt they were born to be stars and they were wondering why their agents had taken so darn long to get their careers launched. They both enjoyed watching the non-horse parts being filmed, especially when Charlie had to repeatedly scoop out feed for a certain segment. That was always watched with alert expressions and pricked ears! The horses were used to demo the use of a weight tape and for assessing body condition.
Asterik is clearly an A-lister as he was pretty bored by this point. He did perk up a lot when they started scooping out feed though. 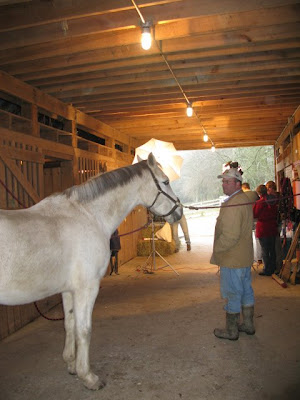 Then, as quickly as they arrived all of the equipment was packed up and everyone was gone. Henry and Asterik had their blankets put back on and went back outside to rejoin their friends. As soon as their halters were off they went racing off to find their friends as if they had been separated for days. They probably just wanted to brag and say "guess what I just did!"
It's a wrap. Jason, Charlie, myself and Bear. Yet again Bear put himself in front of the camera! 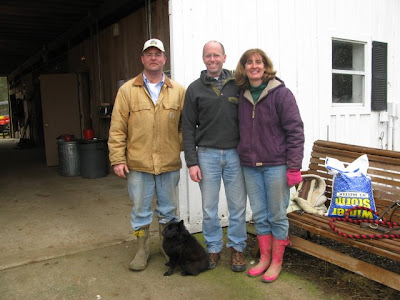 Posted by Melissa-ParadigmFarms at 7:34 PM

Email ThisBlogThis!Share to TwitterShare to FacebookShare to Pinterest
Labels: farm maintenance, farm management, What is it really like?

That is so cool! I had a similar experience when some locals needed a grey (they, of course, said white) horse for a little commercial about a new book.Our Arabian, Bonito,was the star. It was shot out in one of our corn fields and I had to ride him bareback,galloping,and with a sword like I was going into battle! They were going for the "Lord of the Rings" type of scene.:)

That is really cool! Your place is full of stars though, isn't it? I like little bear there, making his presences known. Too cute.

Very cool! I have been working on a TV show as a producer/actor & horses are a main part of the show. It is funny to see how they react to everything! Ha...they don't always do what we want them to do!

Wow, how cool! I think a video about feeding horses is great. I also test my hay and weigh my hay and grain, and I am surprised at how many people are surprised that I do that! I love how Bear wanted to be in the video...maybe dog nutrition will be the next big production?! :D

That is really nice, Melissa! I have to say the same thing about the "scoop" pet peeve. Once upon a time, I used to feed my horses "____ scoops of grain." Now, it is very much: "____ gets exactly 3 pounds of Ultium, with 10 pounds of hay." It drives my mom crazy, because she would feed the horses as much as they'd want to eat (she is in a very "empty nest," overindulgence of the pets stage in her life right now). I have to argue with her all time, saying, "So and so only needs ____ pounds of hay per ______ pounds of Ultium." She doesn't know that I take it seriously and this is the only real world usage of all the math I took in school, so let me compute and feed in peace!!! ;-)

How did Henry and Asterik get chosen to be the stars? I mean, Henry is photogenic, but Sebastian is much more of a ham. Perhaps Sebastian is too fat and the crew is coming back to film a video on obese horses?

Well, Sebastian is a) a bit "plump" and b) he was REALLY dirty! Asterik was relatively clean (for a grey in winter) and I knew he would also be very quiet. And you haven't met the "new" Henry but I knew he would be quiet as well. Since he and Asterik are buddies I thought they would be happy hanging out in the barn together while they waited for their big moments. Neither of them could have been any quieter and they were both hams!