A few weeks ago I had a close encounter with a wild turkey. In all of the years we've spent on this farm I've only seen a wild turkey one other time, and thankfully that time was at a distance. This year is apparently the year of the wild turkey. I hear them all the time, but most typically I hear them gobbling away to each other in the mornings. There is a flock of turkeys that I think lives in the woods in the Big Boys' pasture as I see them walking through it all the time.

Wild turkeys hanging out and doing whatever it is turkeys do (I have no idea) in the big boys' pasture early this morning. Sorry for the poor picture quality but the sun wasn't all the way up, they were in the shade, and I was quite a distance away from them. 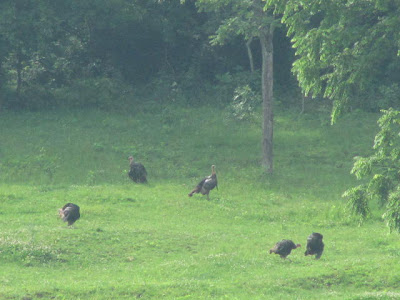 This afternoon my Dad was being very industrious in the barn. He had an unused flat feedpan that he was scrubbing in the wash rack. I found this to be odd but I didn't say anything. He soaped, scrubbed and rinsed the feedpan several times and I kept wondering why he was so diligently washing it. Instead of putting it away he put it in the back of his gator to take with him.

At this point my curiosity was overflowing and I couldn't stand to be left in the dark anymore. I asked him why he scrubbed the feedpan and put it in his gator. He told me that there was a mommy wild turkey nesting in the woods right in front of my parents' house and that she had 14 little wild turkey babies. Apparently he has seen them several times in the last week. He was going to put some chicken feed out for her in the feedpan. When Jason and I drove down the driveway this evening we saw where he had not only put feed out for her but also a bucket of water. I come from a long line of softies when it comes to animals.

*****************************************
Our first round of fencing is complete at our new farm. It is amazing to me how much different it looks seeing a fence along the road as you drive up. As previously mentioned we had 6,000 feet of 4-board wood fence installed. I also previously mentioned that the master plan eventually calls for 30,000 feet of fence to have the entire property perimeter and cross-fenced. It is exciting to us to have at least made a start on one of the zillion large projects that we have waiting for us. We have grand plans but you never start where you want to finish so I keep reminding myself to prioritize and be patient. We admired our new fence for awhile on Saturday and had a lot of satisfaction in just looking at it. This is a good thing since the (depressingly large) bill for the fence arrived in the mail on Saturday as well!
Jason standing at the entrance of our new farm with our new fence. We put two 12' gates at the entrance to give us a 24' opening. The entrance is set off the road by about 80' to allow plenty of room for semis to pull in off the road even if the gates are shut. 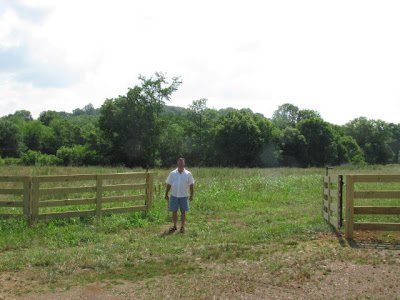 The fence along the road, we had the boards put on the inside of the posts so the horses can't pop them off when they decide to use the fence as a scratching post. 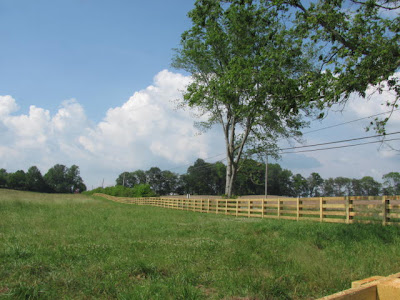 The only downside to having the boards on the inside of the fence is that it does not look as pretty from the road. The fence is behind a hedge along much of the road frontage but a few hundred feet of the fence is plainly visible to the road. We had the fence contractor double plank about 350' of the "exposed" fence with boards on the inside and the outside of the posts. This was purely for aesthetic reasons so the fence could look pretty from the road and as you pull up to the entrance. As you can see we've put way too much thought into this fence and the driveway entrance, but we're trying to to be thorough and smart with our decisions since we will be living with them for a lifetime. After living with a driveway that is not exactly horse trailer friendly we are looking forward to having the easiest driveway ever for horse trailers and semi's to traverse. 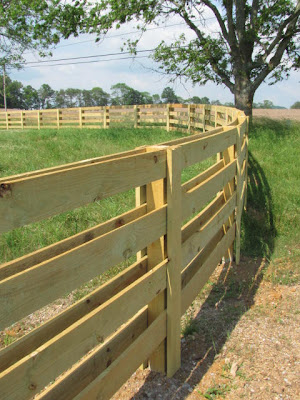 Our next projects include building the first of many run-in sheds, putting in a driveway, and running some water and electrical lines. The good news is that we have gas, water and electricity at the road so we only have to get permits to tap in and then run lines. As far as water we intend to eventually have both well and county water like we have at our current farm. Having more than one water source is something that provides me with a lot of peace of mind. If something goes wrong with one you can simply shut if off and turn on the other water source. The ability to do this eliminates a lot of potential drama.
I hope everyone has a nice Memorial Day tomorrow.
Hemi and Tony enjoying a vigorous grooming session

O'Reilly, Snappy and Lightening grazing in the shade 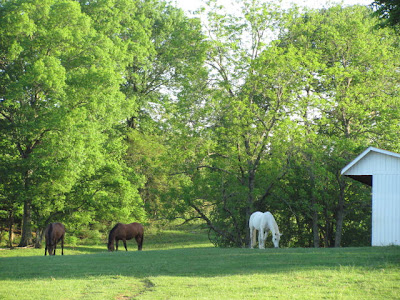 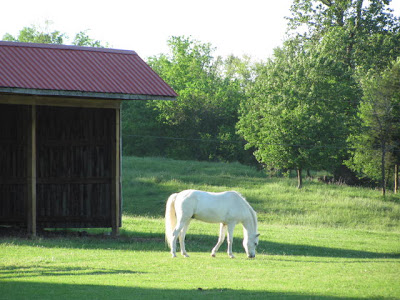 Alex and Bella the dog hanging out 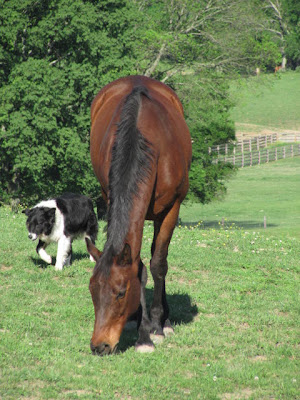 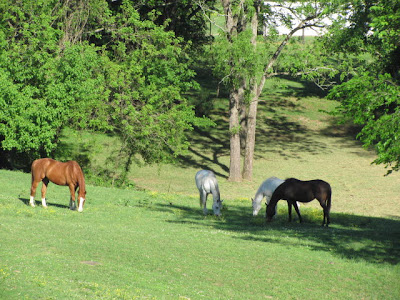 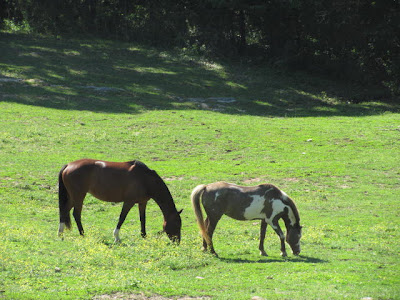 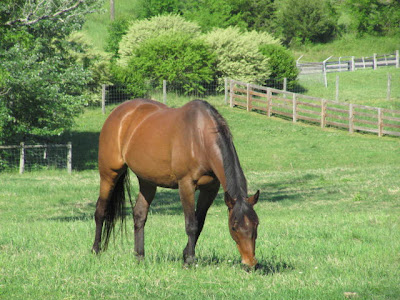 Levendi and Tony trotting through the field 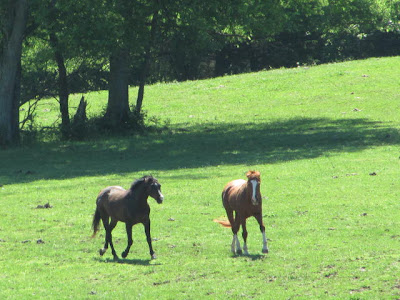 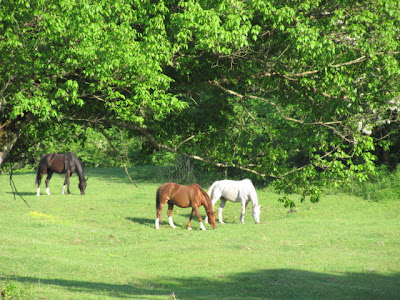 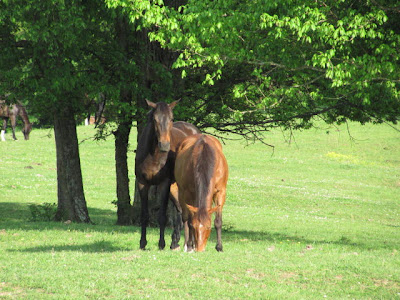 . . . Hemi decided to rest his head on Chance 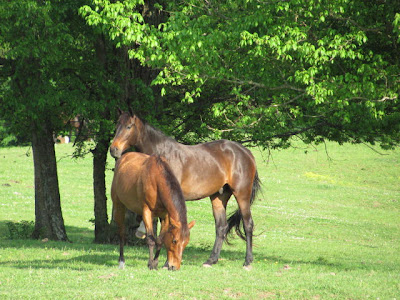 Posted by Melissa-ParadigmFarms at 9:39 PM

That's very nice of your dad to help that turkey lady! My lady loves your new fence! So beautiful!

My goodness, that is one AWESOME fence! I would spend a lot of time admiring it. :) I love that your Dad got the mom turkey all set up and worked so hard on making sure the feed bin was clean. Lucky it is warm out or he'd have to be bringing her some bales of straw. Too cute.

Lol, love your dad! And wow, the property is looking fantastic. I know what you mean about wanting to do it all now, I feel the same way about house and horse projects!

Great story about your Dad and the turkey mama (and babies).

When do you expect to move to your new farm? The fencing is divine!

This may be a dumb question but what keeps the horses from chewing that beautiful fence? Well, I'm sure that they will be grazing in the pastures instead of chewing! Horses who are bored are chewers....they could NOT possibly be so there. Your clients driving up should be very impressed.
Can't wait to see your house and the barns.

Thanks for the compliments ! Nothing keeps them from chewing the fence and some of them probably will do so (shrugging). It'll be unlikely that I'll forget how to cuss as I'm hammering away anyway ! :)

Barn and sheds are next; our house is likely to feature a lot of tar paper at the rate we are spending money right now ! :)

Hi Lori, our move date is definitely an unknown at this poing. I expect we'll end up moving in phases and have a few months of overlap between farms. I look forward to the day it is all over!