Go Ahead and Laugh

I know people love to laugh at us southerners in the snow, and I'm as guilty as anyone of making fun of our over-reactions to the white stuff. We had a southern version of snowmageddon the last couple of days. The amount of snowfall varied anywhere between 3 inches and all the way up to a foot or a little more. That may not sound like a lot to some people but for this area it is a LOT of snow. As always the schools were announced as closed on Sunday evening before the first snowflake appeared in the sky. They are still closed through Wednesday and who knows if they will even be open this week at all.


The new farm was on the higher end of snow accumulation and had about a foot of fluffy white snow on the ground before it finally stopped falling out of the sky. Jason looked up the weather records and it is the second highest snowfall ever recorded for the area in 130 years of records and is the equivalent to 3 years worth of snow in one snow fall.

This picture pretty much sums up our ability to handle this snow! (I cannot take credit for this picture, a friend took it) 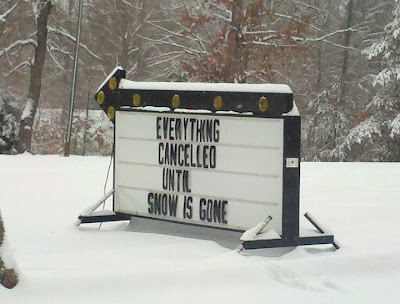 I can't take credit for the next three pictures either, I swiped them from a friend. The traditional rush to the grocery store ensues any prediction of snow, even if we're talking about no measurable accumulation. Here is where the milk should have been: 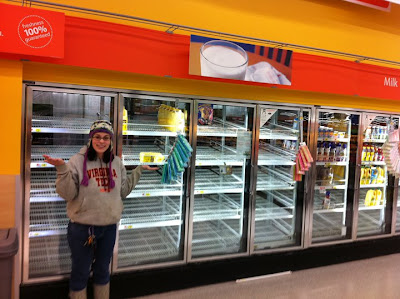 Where the eggs should have been: 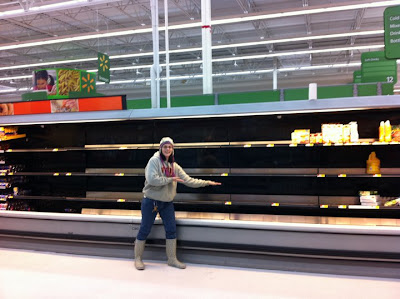 The 20 or so loaves of bread that were left on the shelves: 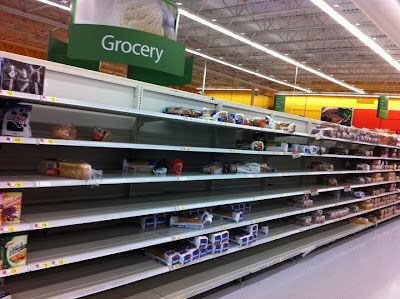 It is amazing we've all managed to survive! I was watching the news yesterday and saw a clip of a car in the Atlanta area that was on fire. I googled and found the full clip on the local Atlanta news station site. They had a live crew filming and some guy was trying to drive on a slight uphill incline in his real wheel drive BMW. Instead of letting off the gas as the car slid around he just kept accelerating harder and he literally burned so much rubber the car caught on fire! On live television! The funniest part was the news crew had to flag the driver down to tell him his tires had caught on fire! While waiting on the fire truck to get their the entire car eventually was engulfed in flames. Then they showed the fire truck spraying the flaming car. Only in the south!!
I showed the video clip to Jason and he stood there with his mouth wide open watching it. Watching his reaction to the whole thing was as funny as watching the clip itself.
I hope all of you northerners had a good laugh out of this post and the pictures. Heck even I think it is funny!!

Mina and Jo, World's Cutest Fainting Goats, were not pleased with the snow. Here is Jason trying to put them out on Monday morning. Mina wouldn't even get up! Then when she is about to leave the barn she looks back at me like "do I HAVE to go out there?"
Bush does not look very happy in this picture. I'm thinking my expression mirrors his! 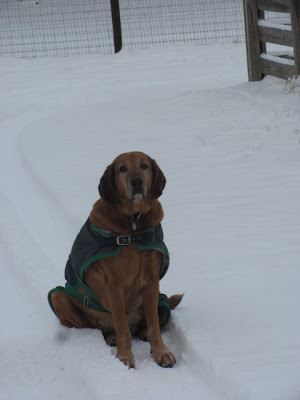 Justin was playing with Bear and Bella 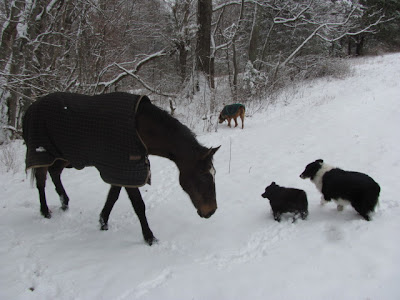 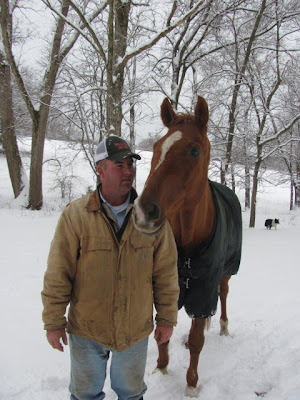 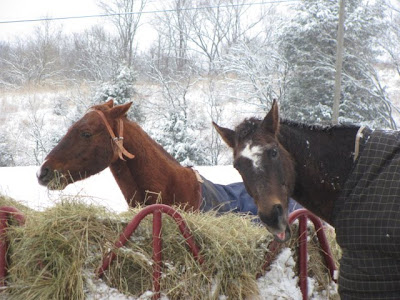 Chili having a good roll in the snow 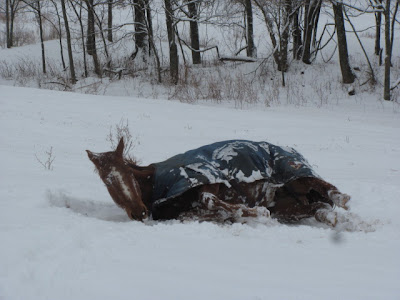 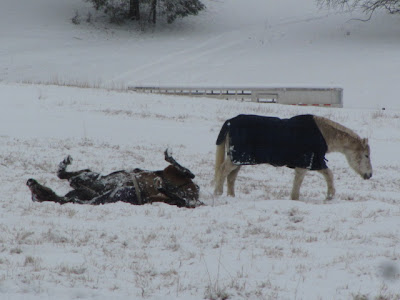 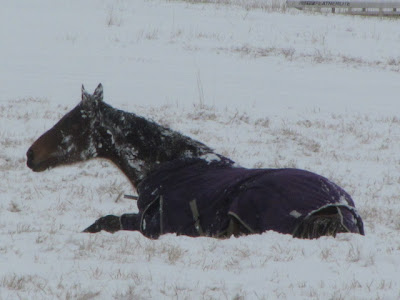 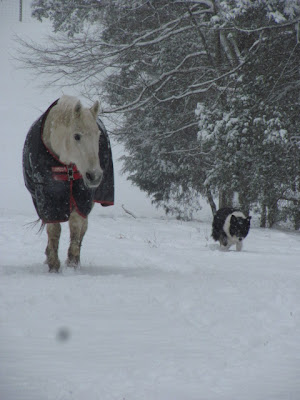 Asterik with Gus and Romeo behind him 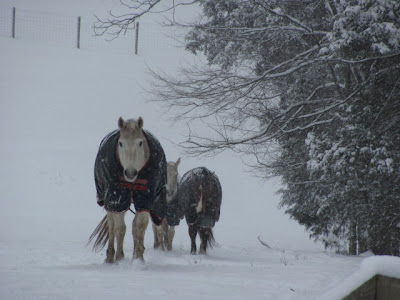 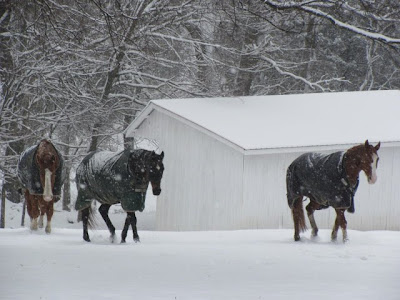 Rocky and Rampal were playing 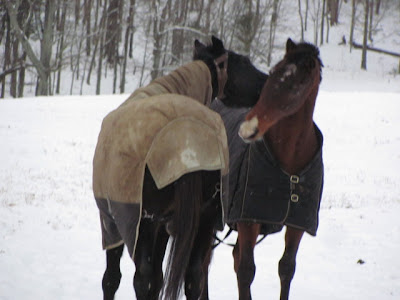 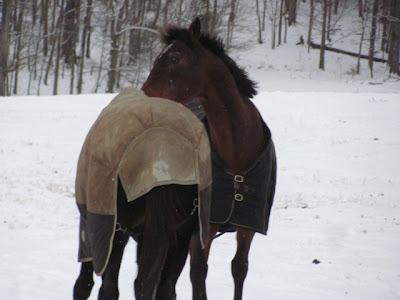 Maisie and Lily at the salt block 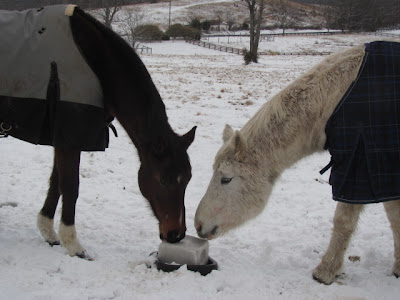 Levendi (Grand and Hemi in the background) 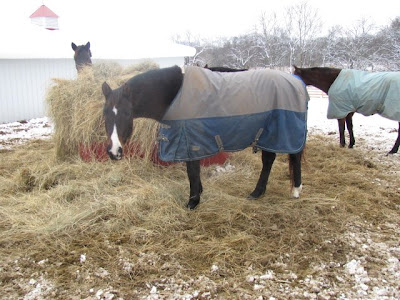 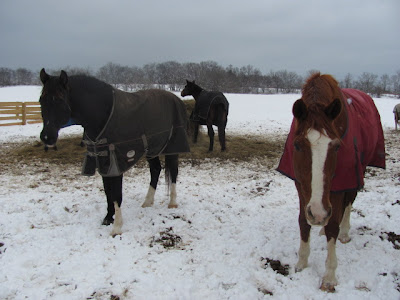 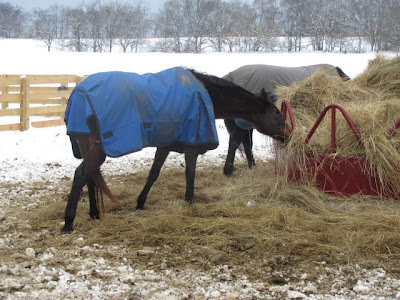 Ivan and Leo were playing 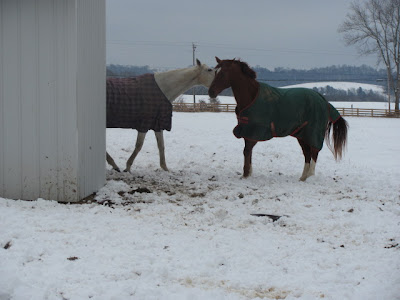 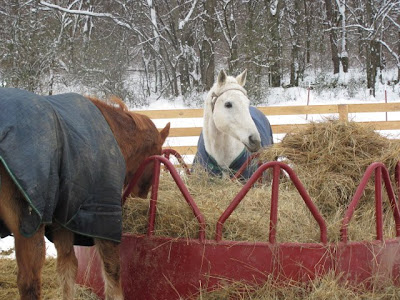 Posted by Melissa-ParadigmFarms at 7:35 PM

The horses look happy in the snow - love the BMW on fire story - what was the driver thinking? (but then I guess thinking wasn't part of the story!)

Lol, you've had more snow than we have in Ontario!

3 inches of snow on flat ground...that's nothing! LOL...though according to the pictures at your grocery store, the world's ending! Love that!

Sounds like Southerners survive the blizzard on bread pudding! (bread, milk, eggs)
The horses seems to be taking it all in stride, even if the people (and goats) may be less than prepared.

That video sounded too funny, so I had to go find it.
http://www.youtube.com/watch?v=yyVOl_Anlow

Why are you so mean to those goats? Let them in the house where they belong, don't kick them out in the snow!

You northerners may laugh about the bread-n-milk thing, but it's kind of a self-fulfilling prophecy. If you don't go to the grocery the second you hear snow predicted, there won't be any left. And if you run out of food before the snow melts, you're out! People don't go to work in that!

I remember one snow storm where I ended up eating at Waffle House because I had no food and there were no groceries open. ;)

Wow - you guys have more snow than I do in Ontario as well (I live in the same city as RuckusButt)... I may shake my head a bit at all of the closures and the end-of-the-world grocery store situation, but it makes sense for a place that normally doesn't get snow for things like that to happen.

I'm sure most southerners would have a good laugh watching me in 100 degree heat and humidity... :-)

Giles County schools are closed through next Tuesday!

100 humid degrees isn't very pretty for us Canucks, I can attest!

Love that picture of Bush! I'm from NY and went to college in mid-Connecticut. I had a BMW then and it never could make it up the hill to my dorm when the snow was heavy- it was terrible in the snow! It's been really cold in Fl. so all the horse people are wrapping their horses in at least 2-3 blankets and turning them out in them as well!

The horses are beautiful :~)