As I was walking through the pasture today two of the dogs, Trooper and Bella, accompanied me. Trooper is a black lab mix and he is missing his right front leg. We adopted him from a local no-kill shelter. The shelter told us that he had a birth defect and his right front leg did not touch the ground by several inches but he kept trying to use it anyway. As you can imagine this made it really hard for Trooper to get around. The shelter had his leg amputated and Trooper's ability to get around improved immediately as he was no longer trying to use a leg that didn't work.
We adopted Trooper because he looked identical to another dog that we had at the time, Sherman. Sherman was also a 3-legged black lab mix missing his right front leg. We had a matched set for a couple of years. What were the odds of that? Sherman was quite elderly by the time Trooper came along 5 years ago so we only had our matched set for a couple of years.
Sherman never acted like he cared about his disadvantage and neither does Trooper. Trooper runs with the other dogs and really likes to play rough and tumble, and true to his lab roots he is an excellent swimmer in the pond as was Sherman. While walking through the pasture today Bella and Trooper were playing hard. Then they were both running around the pasture exploring. Trooper did everything Bella did although sometimes not quite as fast. Trooper LOVES to play, especially rough and tumble play. He certainly doesn't think of himself as having a disadvantage!
_____________________________
In other news our snow finally melted on Monday. Guess what? There are snowflakes in the air right now. Just shoot me. I thought I lived in the south, hello?? I told Jason this evening that I am packing up myself and all of the horses and we are moving to the Keys. I hate winter.
Have a great weekend!
Trooper, 3-legged black lab mix and Bella the border collie mix. Missing a front leg doesn't hamper Trooper's mobility. 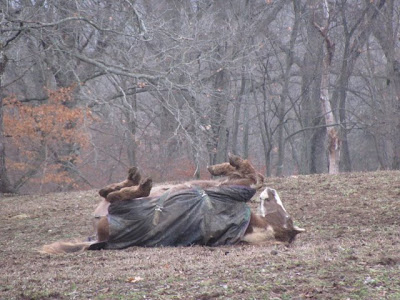 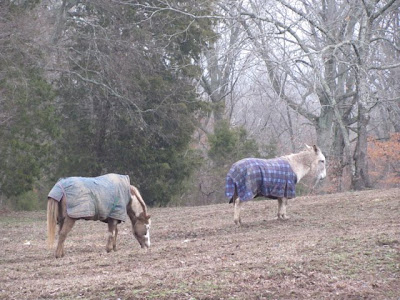 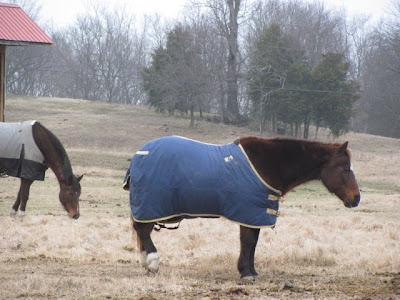 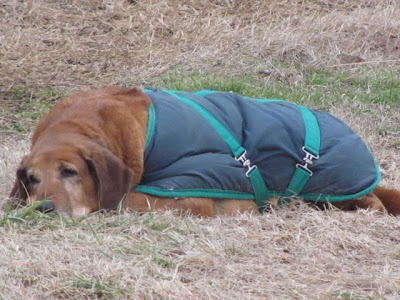 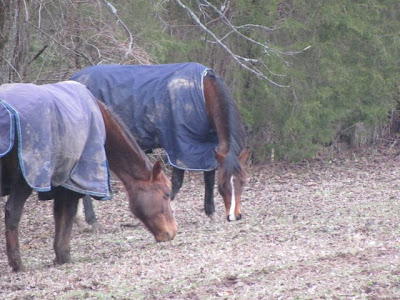 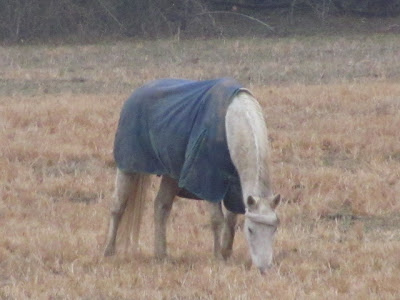 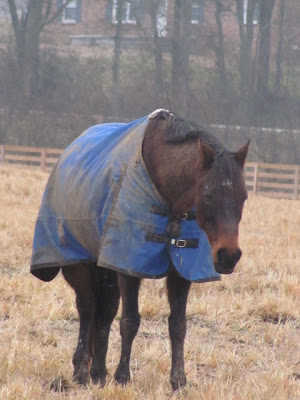 What a tough life; Levendi taking a nap with a piece of hay hanging out of his mouth 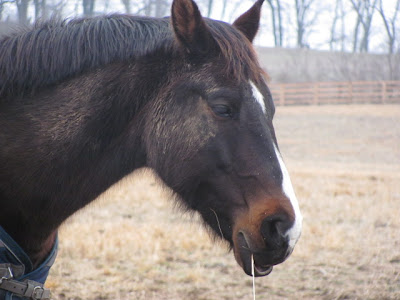 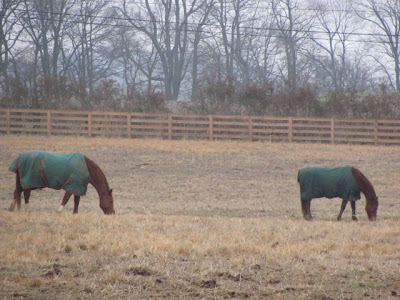 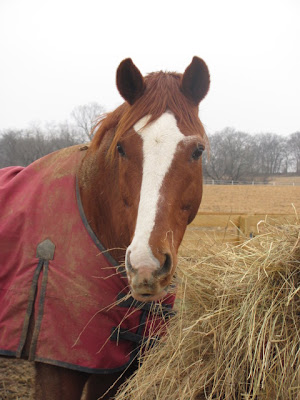 A few pictures from Monday that I forgot to post earlier this week:
Tiny and Johnny playing 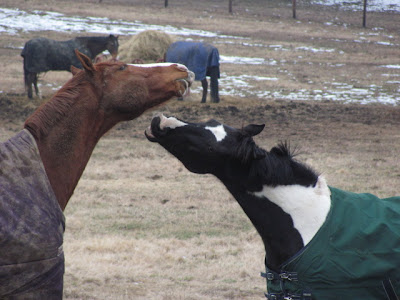 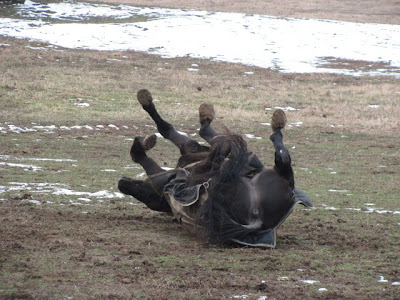 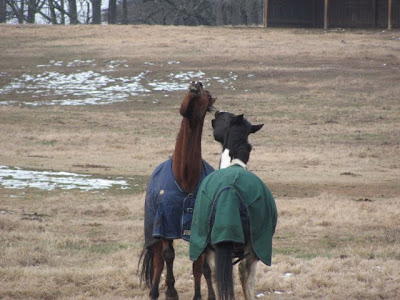 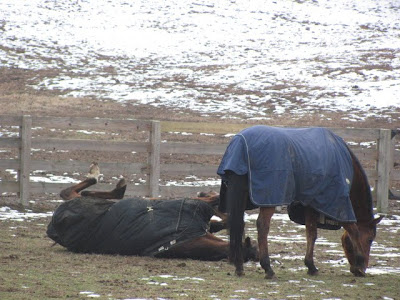 Posted by Melissa-ParadigmFarms at 7:27 PM

What the odds? I just started following your blog and guess what? We have two three-leggers and both are missing their front right legs. LOL They are rat terriers and both were hit by cars and lost the same leg. I said if one had lost the left leg we would at least have book ends. Both are aging and slowing down a bit (Snit is 14 and Isabelle is 11) but I can attest to the fact that it never occurred to either dog that they were disabled. I've enjoyed reading your blog and love the pictures. I'm also hoping for some warmer weather soon!

Caught up tonight, missed a few due to work. But always like to read this blog, its so calming.

LOL if you buy a whole key, you won't even need to fence it. Just have hay delivered on a ferry. Doesn't that sound lovely!

Trooper is a cutie. 3 legged dogs and cats are so amazing - they just roar through life exactly like normal animals. :)

As usual everyone looks so content and happy at your lovely farm! Trooper sure has lovely muscles on his one front leg! I like the way his tail goes, "boing, boing, boing" when he runs!

Melissa-
I'll pack a bikini and sunscreen for Leo...By the way I'll be joining you also

Just discoverd you blog what an awsome thing you are doing providing retirement home for horses!!

loved reading rampals story and hearing about you 3 legged dogs! your right animals never know they have a disability whether it be loss of limb, eye, etc they just carry on!

please check out my blog to

The thing I love about that video is both dogs are so incredibly HAPPY. Trooper's face was so engaging I forgot he was missing a limb :). Dogs really know how to spread a message don't they? Never feel bad for yourself, always embrace life. And Trooper really embodies that [talk about a fitting name!]