Melissa is a creature of layers in the winter time. She starts with several pairs of socks, adds a pair of long underwear or two, a shirt, some pants, and a couple of heavy sweaters to the mix before putting on her overcoat ( a purple Carhartt), gloves and a wool hat (us Canucks call 'em toques). Even wearing this many clothes she complains long and loudly over the state of the weather (I'M COLD!) here in Middle Tennessee.


Earlier today, just a few minutes after she snapped my picture minus my coat (featured in the photo section below) we began working at chores in separate pastures a couple hundred yards away from one another. After awhile, when she thought I wasn't watching her, I saw her hood come down and her toque come off. She shook her hair and clearly liked what she felt. Off came the gloves. I stopped what I was doing to watch her in the distance because I knew what was coming next. First the zipper came undone. And then, like a tortoise leaving it's shell, off came the purple Carhartt coat ! She stood there, quietly smiling in the middle of the pasture, wearing nothing but her pants and sweaters, gloves off, head uncovered, blinking in the warm sunshine, taking it all in. (Melissa here adding that I also still had on my long underwear underneath my pants, turtleneck and sweatshirt along with my double pair of socks and my insulated paddock boots)


And then, suddenly, she spied me watching her and it was all over. (Melissa again. No, I just realized I was already getting cold again. At least I tried to see if I had acclimated. YOU looked comfortable and the sun was shining so I was inspired.)

The temperature at coat removal time ? A balmy 43 degrees.


Even a daughter of the south will adapt, given time. (Apparently not yet. I'm fervently hoping we do not have more time to give to this experiment.)

Here are a few more snow pics for everyone to look at. Hopefully, this will be the last set we have to take until next winter ! 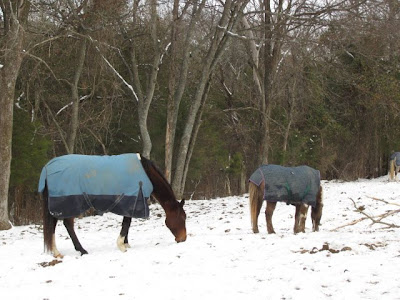 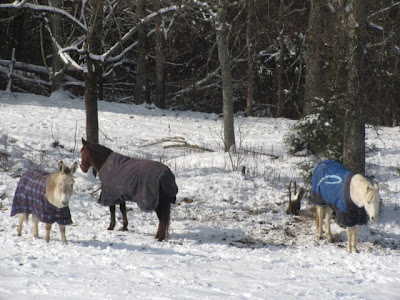 Winston was holding his own lead rope 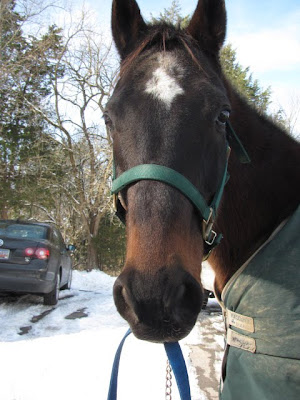 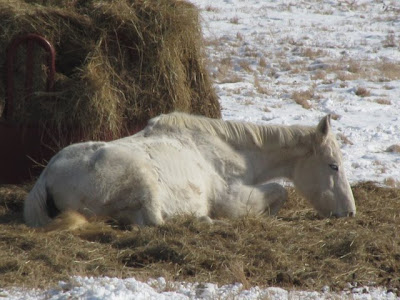 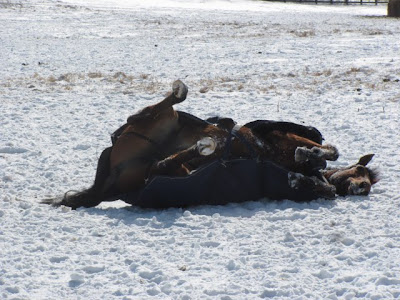 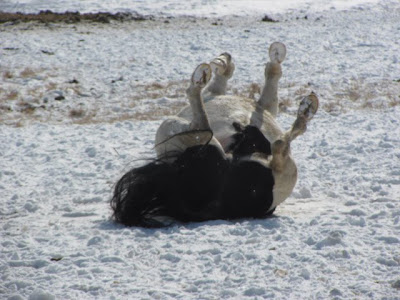 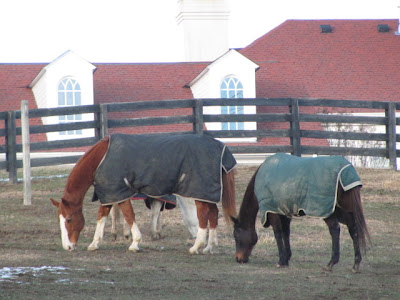 Me hanging out with Hoffy 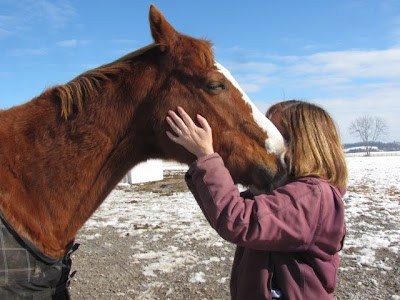 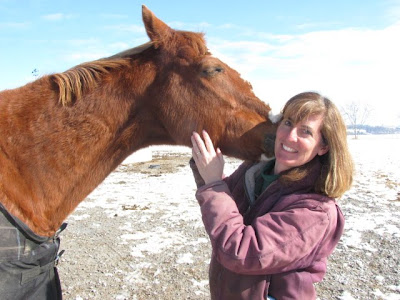 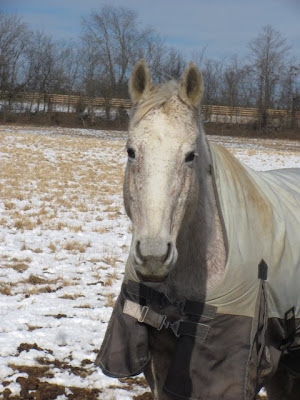 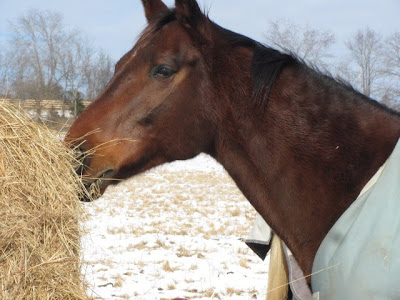 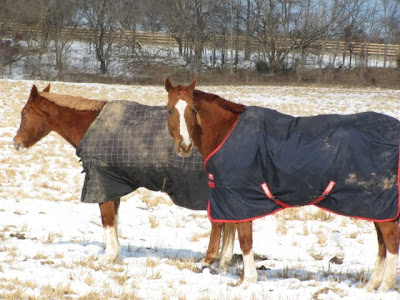 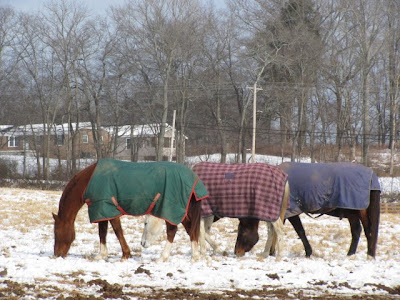 Noble napping and Spike hanging out 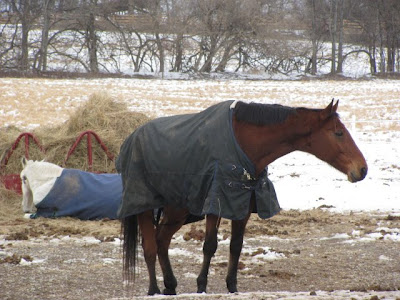 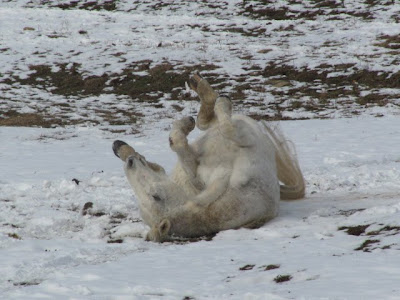 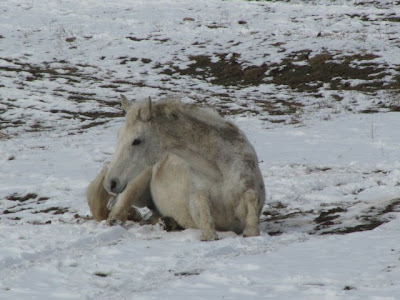 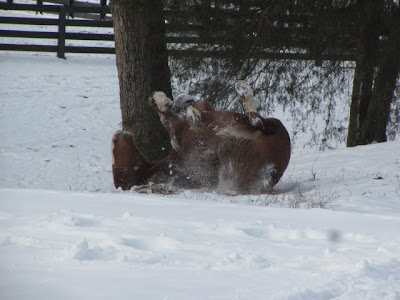 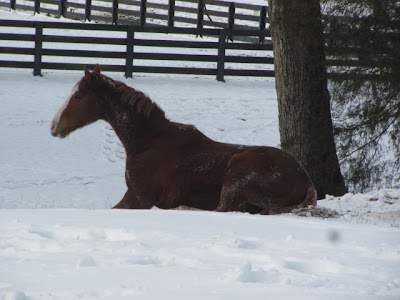 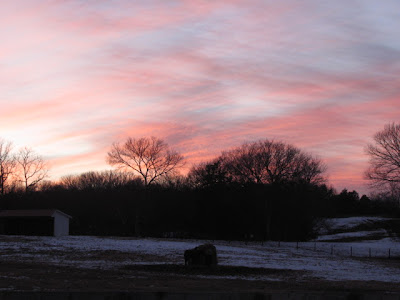 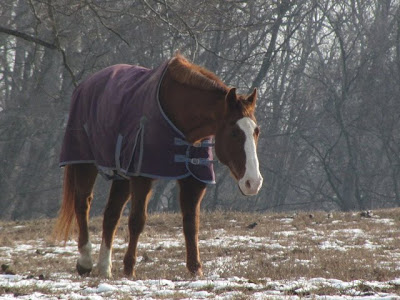 Jason didn't even feel a coat was necessary on Sunday afternoon 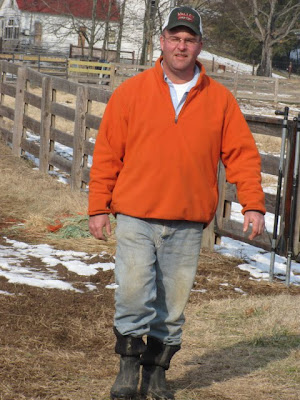 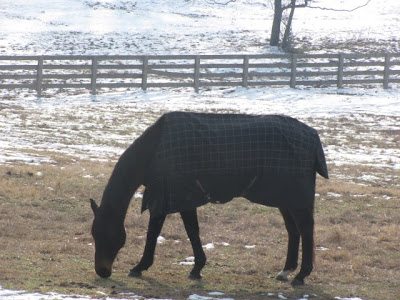 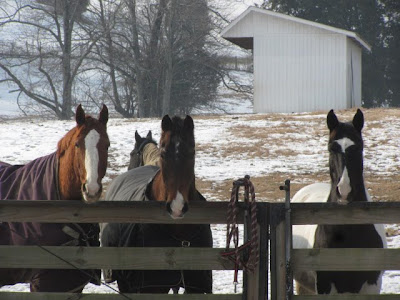 Posted by Melissa-ParadigmFarms at 7:19 PM

I love the description of melissa's layers...I have to say though...that's shorts weather ;)
It's been pretty cold here, especially with the nasty winds. (I call hats toques, too :) )

43! I can't imagine what I (wouldn't) be wearing at those temperatures - this morning when I went to the barn to do chores the wind chill was 0F.

43 degrees?! That's warm! It's been in the teens lately and that's not even counting the windchill!

43degrees?!? That's jacket weather here! When I got to the barn to feed yesterday morning, windchill had reduced temps to 5F. :)

I stumbled on your blog from your website, and I wanted to thank you for emailing me back about arrangements for retirement. Your blog entry further down about the stages of retirement really hit home for me. It was exactly what I needed in the moment I was reading it. Thank god the roller coaster ride has ended - not the way I had hoped, but it's done and I'm okay with that.

While I think you're facility is just too far from me, I think it's quite lovely and the residents there look so happy and well cared for!

I have left you an award on my blog!