As Jason mentioned in our last post we had quite a weather shift this week.  We went from temperatures in the 70's to temperatures hovering right around/above freezing day and night, and lots of precipitation.  I mean a LOT of precipitation.  So far the weather forecasters have pretty much gotten it wrong every single day.  We were supposed to have what everyone was referring to as the Ice Apocalypse. We did have some freezing rain come down every day this week.  Thankfully it always changed back to rain so no havoc was wreaked on middle Tennessee, occasionally it even stopped precipitating for brief periods of time.

Well, that is not entirely accurate. I imagine by Monday evening there wasn't a carton of eggs, a loaf of bread, or a container of milk left in any grocery store in the state. Havoc was wreaked regardless of if the weather event actually happened. Since Jason and I were still not eating thanks to our stomach flu this was not a problem for us (I'm still not eating but that's not really the point of this blog . . . ).

It did, finally, clear out this afternoon, and - GASP - the sun came out.  I was starting to think I was going to live with this crap weather forever, and we were going to have to learn to coexist like two hearts that beat as one.  This was not making me happy.  This was not making Jason happy either. This meant it was hard for anyone to be happy in our house. As I commented to Jason that we weren't providing Carter the most cheerful environment ever the last few days, he said, in all seriousness, "dammit, we are a happy family!!" I kid you not. I just looked at him with a confused expression while trying to understand why on earth he couldn't see the conflicting items in that statement.

Quite frankly, the only ones that didn't seem to mind this crap weather were the horses. I'm telling you it just plain isn't fair that you can throw a waterproof blanket on them and they act freaking immune to this miserable weather.  As I threaten to do every year, I am seriously thinking about packing up myself, Carter, Jason and the horses and moving to the Keys.  However it is looking I will be able to hang on here for at least a few more days. If the weather forecasters actually got the forecast right it is supposed to be sunny the next few days, and warmer.  Note I didn't say warm, but at least we'll be sunny and in the 50's for a few days.
______________________________________ 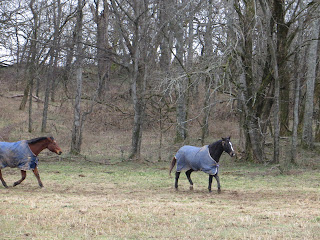 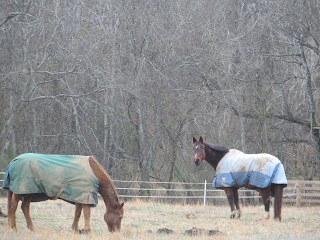 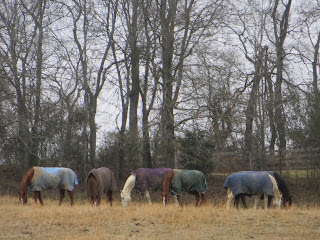 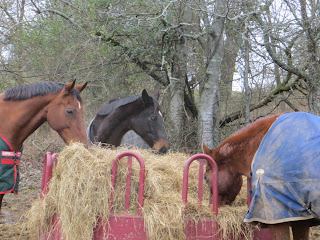 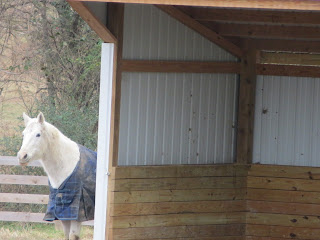 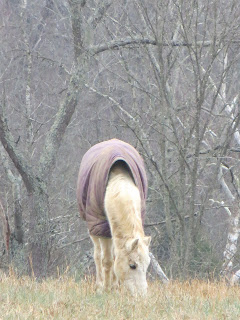 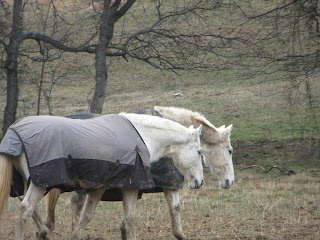 Romeo and Faune were playing 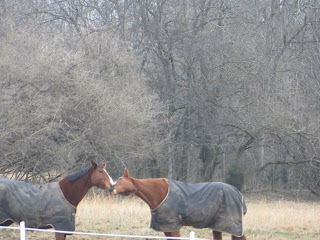 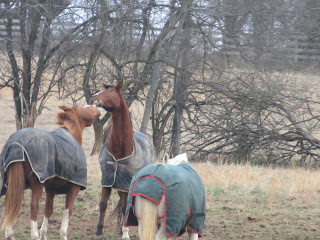 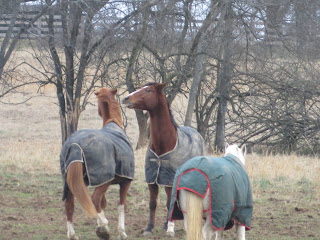 Silver though that looked fun so he played with Faune for awhile; George was ignoring them 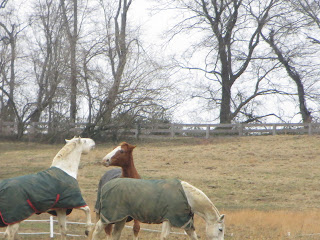 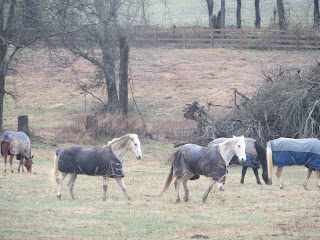 Posted by Melissa-ParadigmFarms at 8:05 PM

Hee hee, I'm sorry if I have a hard time feeling bad for you when it comes to weather. As I write this, it is -21F(-6C) in Ottawa.

I spent 3 hours at the barn, sat on my horse for 30 min to get his circulation going (w/t/c - which stands for walk, trot, cough) froze my toes & fingers, hot compressed Armani's jowl, and helped the night staff do chores and bring in several horses (I do night chores sometimes when they're short but tonight was NOT my night, I just felt bad). It was evil.

I don't have to deal with it to the extent you do every day and I am, at least in theory, more acclimatized to the cold, so I understand how your temps would feel amazingly warm to me yet freezing to you. I do wonder how anyone chose to settle here and subversively dream of making plans to move somewhere more reasonable...

Love the horses, as always.

There is a self appointed weather expert (with some vague expired connection to authentic sources + a long email list) who periodically feels the need to frighten everyone around here with apocalyptic predictions.

Even worse than the weather channel, but don't get me started on that...

He informed his victims last week that we were to expect an extended period of sub freezing temps, with overnights below 20F... That is essentially 100 year weather in this area. If true - major (costly) weatherproofing efforts would be necessary for most residents.

Reality is we won't even get below mid 30's. Annoying but not worthy of the (curse word) hype.

I long for the days when (more) people relied on their innate weather knowledge, particular to their climate and patterns. Weather culture. The old timers have it around here, and I am cultivating it as hard as I can...

(sorry for the rant - hope you all feel better soon!)