Last week I specifically wished for a broken gate and a functioning water line. This somewhat worked out, but just to repeat and clarify I asked for a broken gate, not a broken fence. I suspect the universe wasn't listening reading closely and someone needed to read more thoroughly.

Things were humming along pretty well the last few days. Nothing was broken, not a water line, not a gate, not anything. Christmas was quiet and we finally made it through a holiday without having to drag the vet out. It was nice. Since this is real life, or maybe I should say our life, of course it didn't last.

Things were going along as planned for most of the day today. Morning chores were routine and we only had one runner when we were putting halters on the horses that had a date with the farrier today. Everyone was well behaved for the farrier. We ate lunch and headed back outside.  Then we missed seeing the destruction of part of our fence by about a minute.

Alas that happened today and we had an extremely smashed up, upside down SUV just inside the fence in our pasture. The driver of a large SUV lost control of the vehicle and went airborne. The SUV flipped over as it went airborne, off the road, through the treeline, over the ditch, took a utility pole out of the ground and snapped it in half, and finally went through our fence and landed upside down. By some miracle the rescue squad found a mostly unharmed driver once they were finally able to extract them from the vehicle. They left on a stretcher in the ambulance as a precaution. Then it took equally as long to extract the mangled remains of the SUV from our pasture. The horses in that pasture were largely uninterested in all of the commotion. They were at the opposite end of the pasture when it happened and aside from a few raised heads they had little interest in all of the activity.

Once the SUV was removed Jason then put up several corral panels to temporarily repair the fence and we thought we were done with unexpected incidents for the day.  That is until Jason realized he had lost his wallet. He told me he had caught his back pocket on the tractor (which he had driven out to the scene loaded up with corral panels) and torn it. He thinks his wallet fell out at some point after that. We walked all over the pasture looking for his wallet. We tried to retrace the paths he had driven in and out of the pasture on the tractor.  We went back to where he had gotten the corral panels. We looked in the truck to make sure it wasn't in there. We looked everywhere. So to add insult to our injured fence Jason is also down one wallet and it is laying around somewhere on our 150 acres.

Just to clarify what I asked for last week I will repeat that I asked for a broken gate and a functioning water line. A broken gate, nothing more and nothing less. I will acknowledge that I did get the functioning water line. Broken gates are relatively easy to deal with in the grand scheme of things. Broken water lines and smashed up fences not so much.  Also, if anybody wandering around the farm happens to trip over a wallet, that would certainly save us a lot of time and aggravation.

Apollo, Hemi and Thomas were in a hurry to get somewhere

Walon says waiting for the farrier is so very tiring 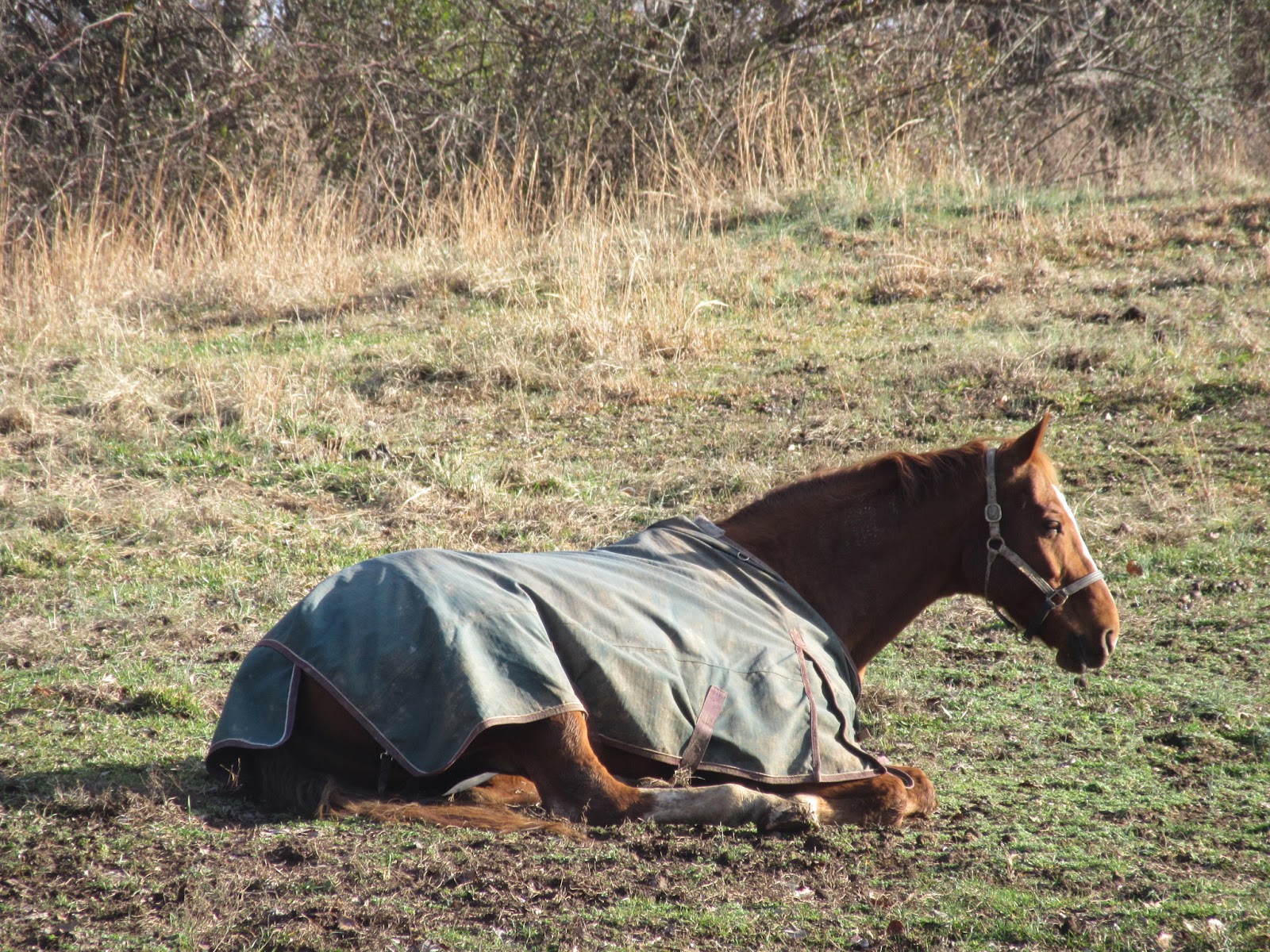 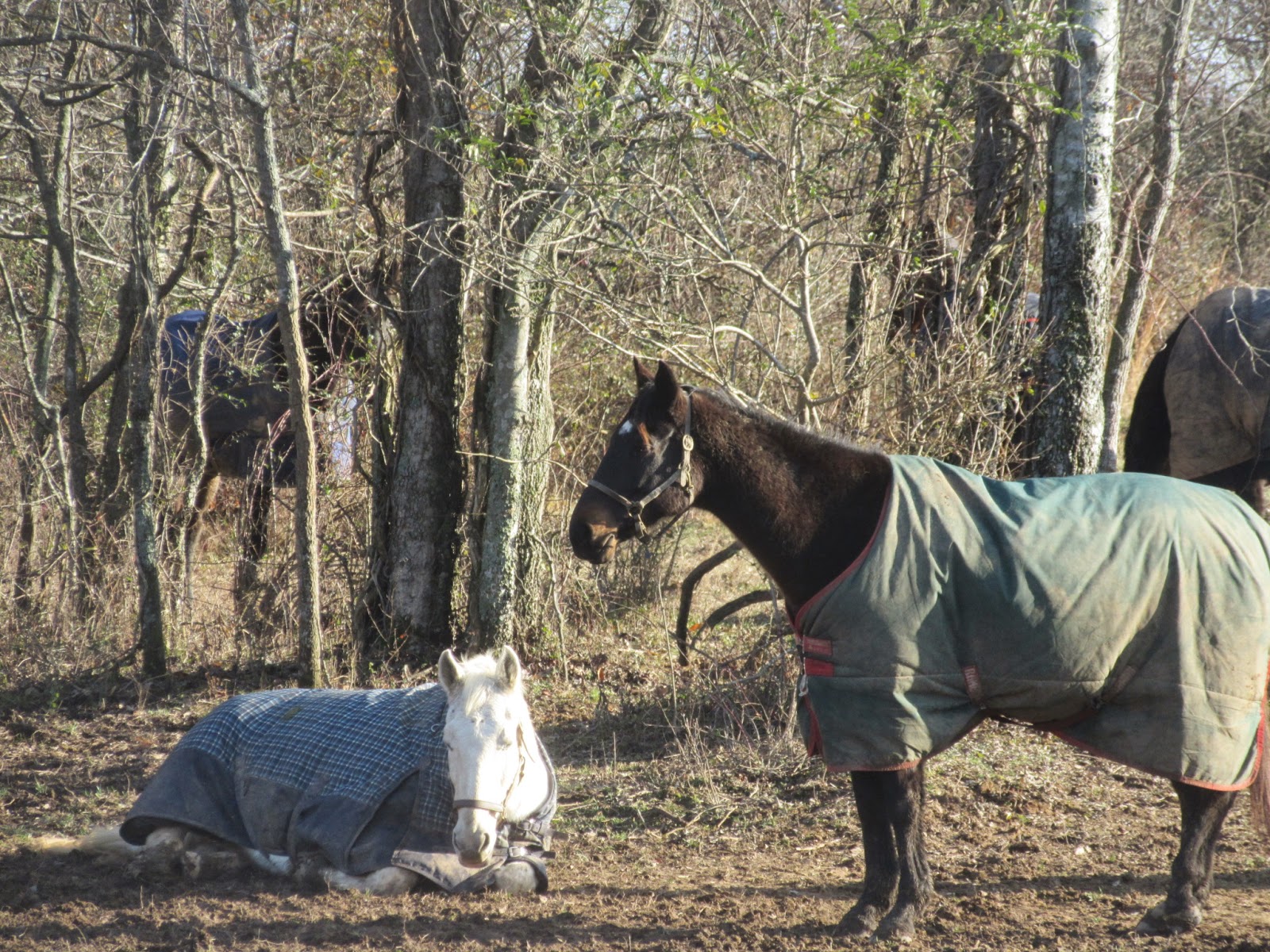 apparently the thought of having hooves trimmed was exhausting today; Apollo, Rip and Grand 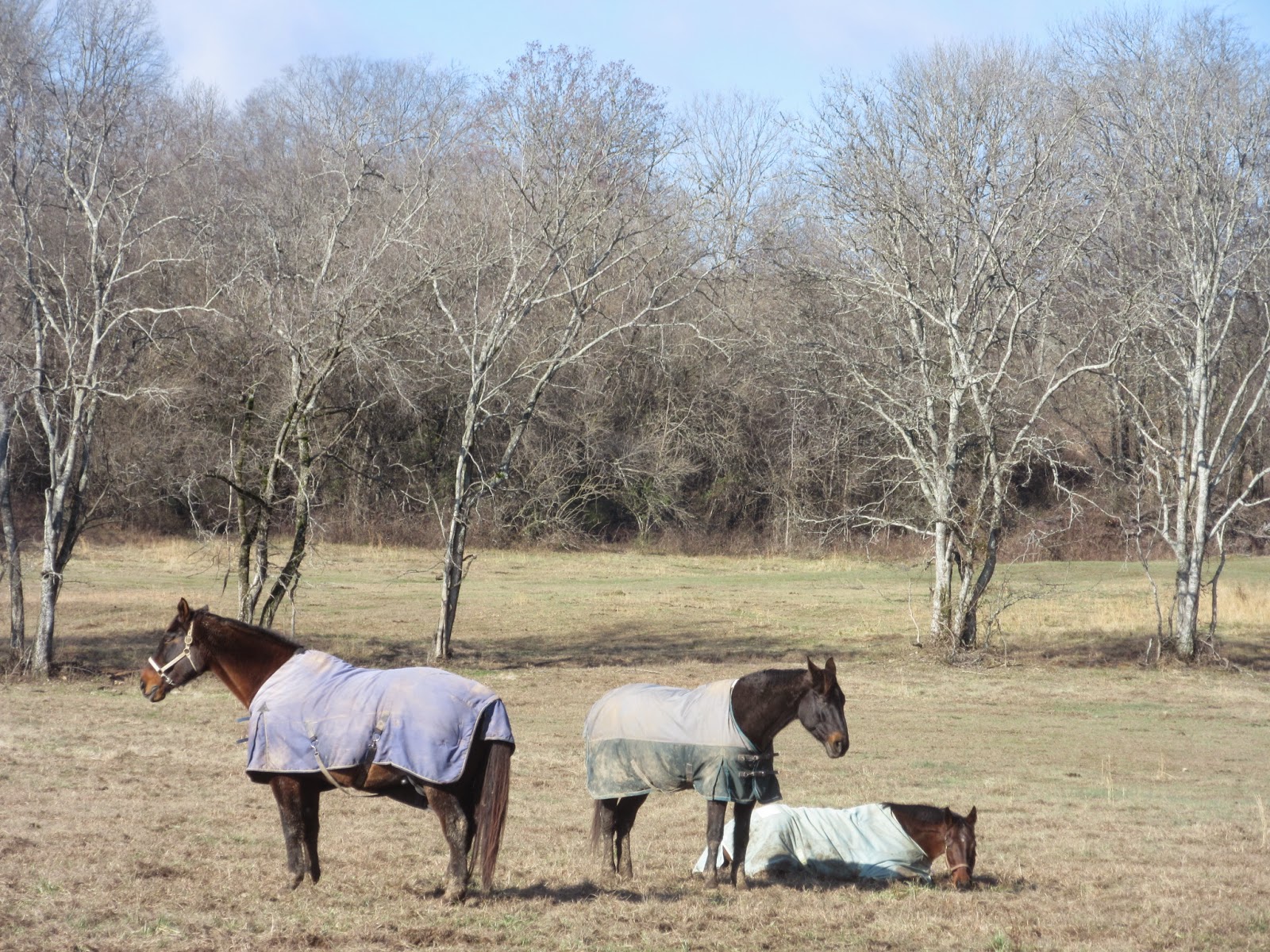 Why would you bother using a shed when it is raining when you could use it on a sunny, pleasant day instead? Tony, Elfin, Thomas and Homer hanging out 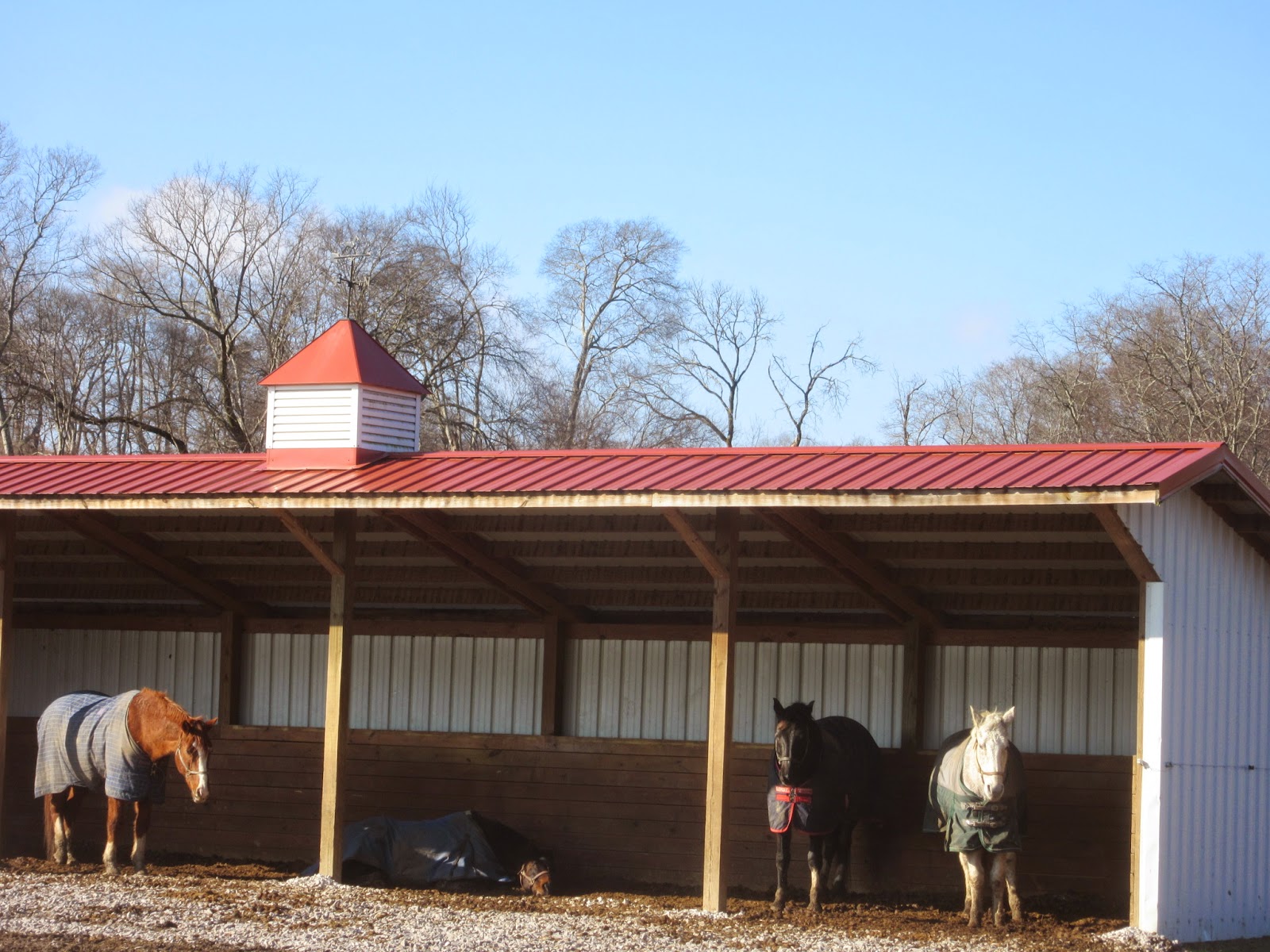 Moe and Levendi resting up for their farrier appointments 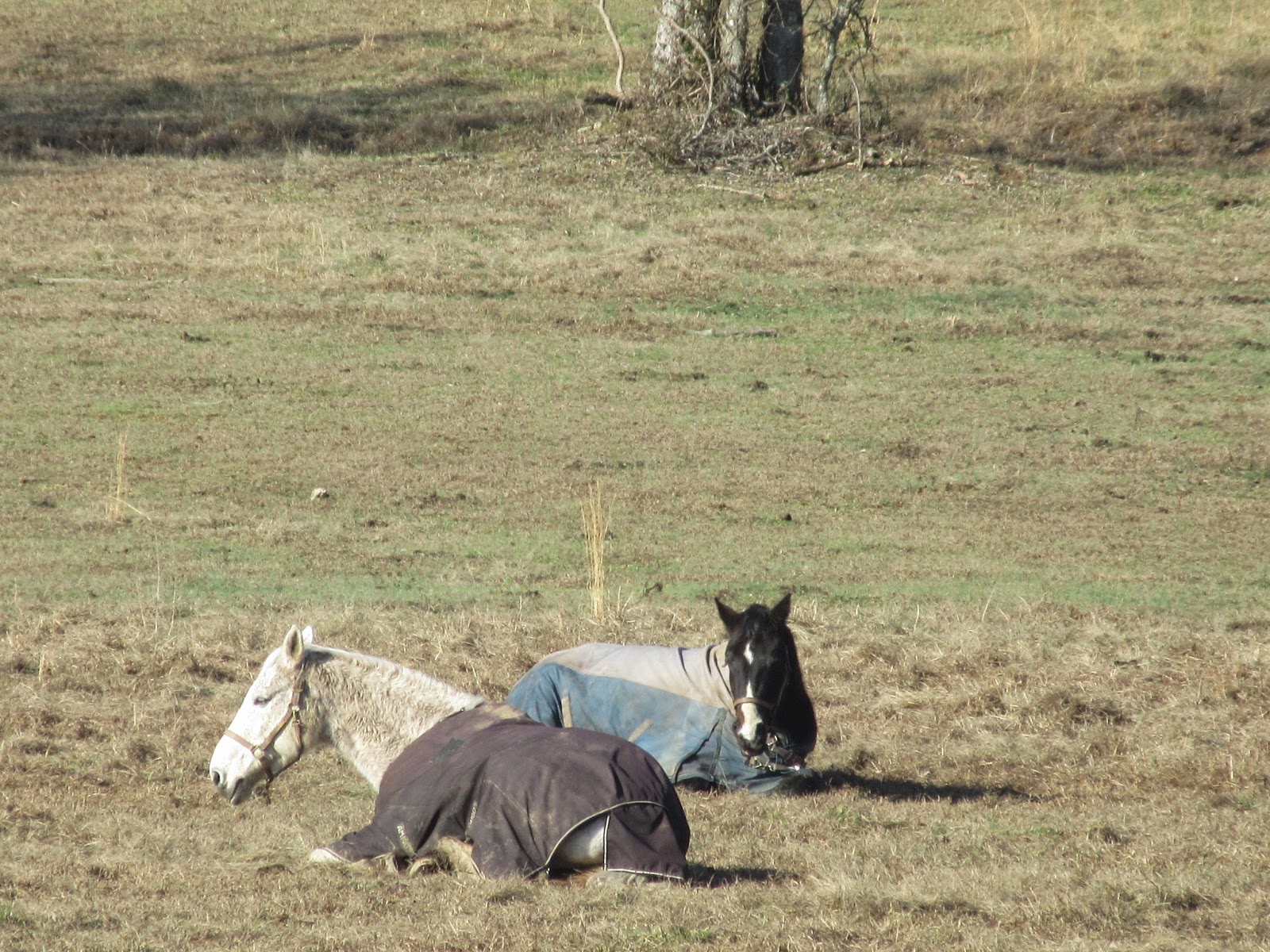 Stormy and Johnny were being goofy; taking pictures directly into the sun doesn't work out very well. 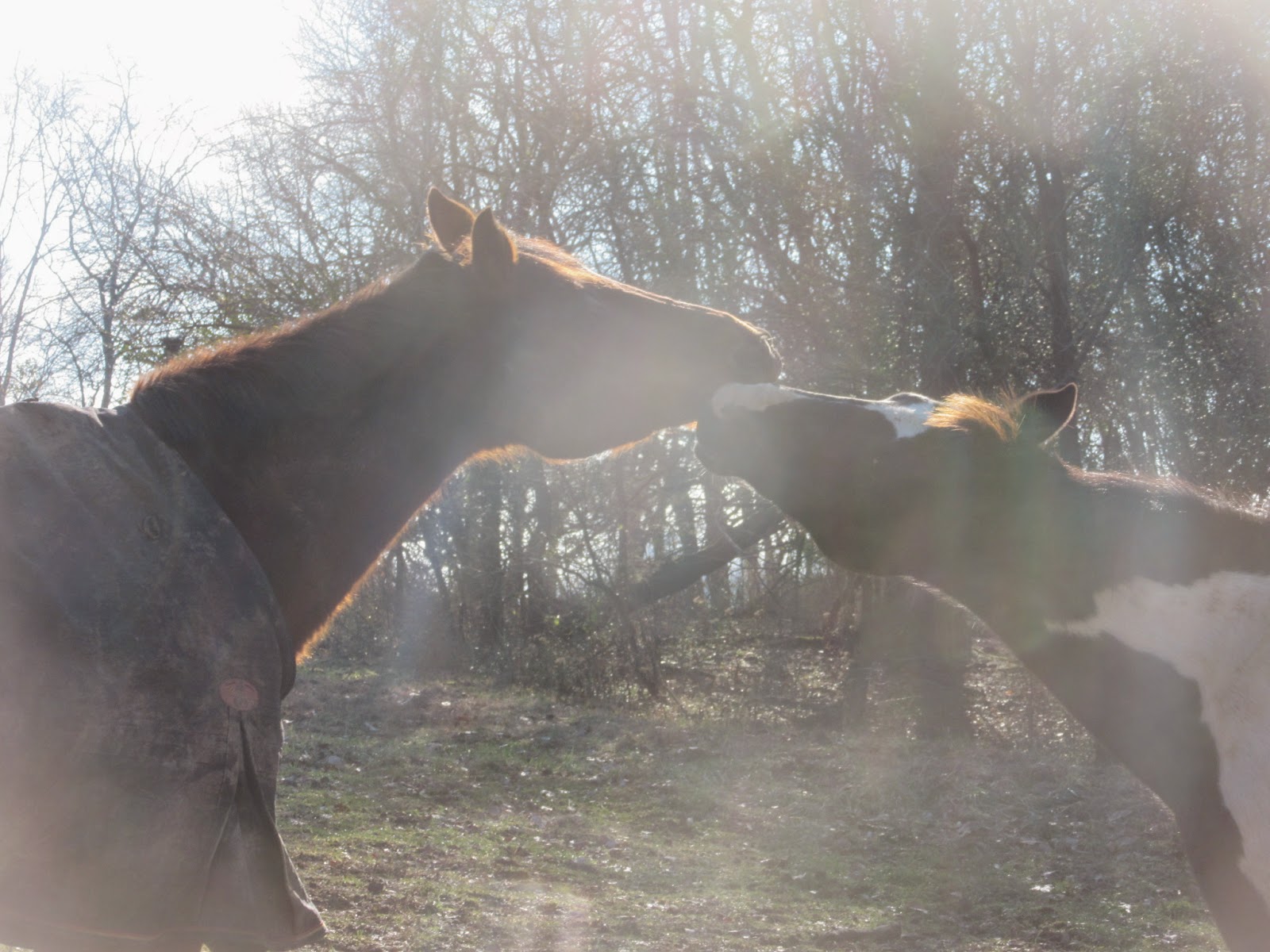 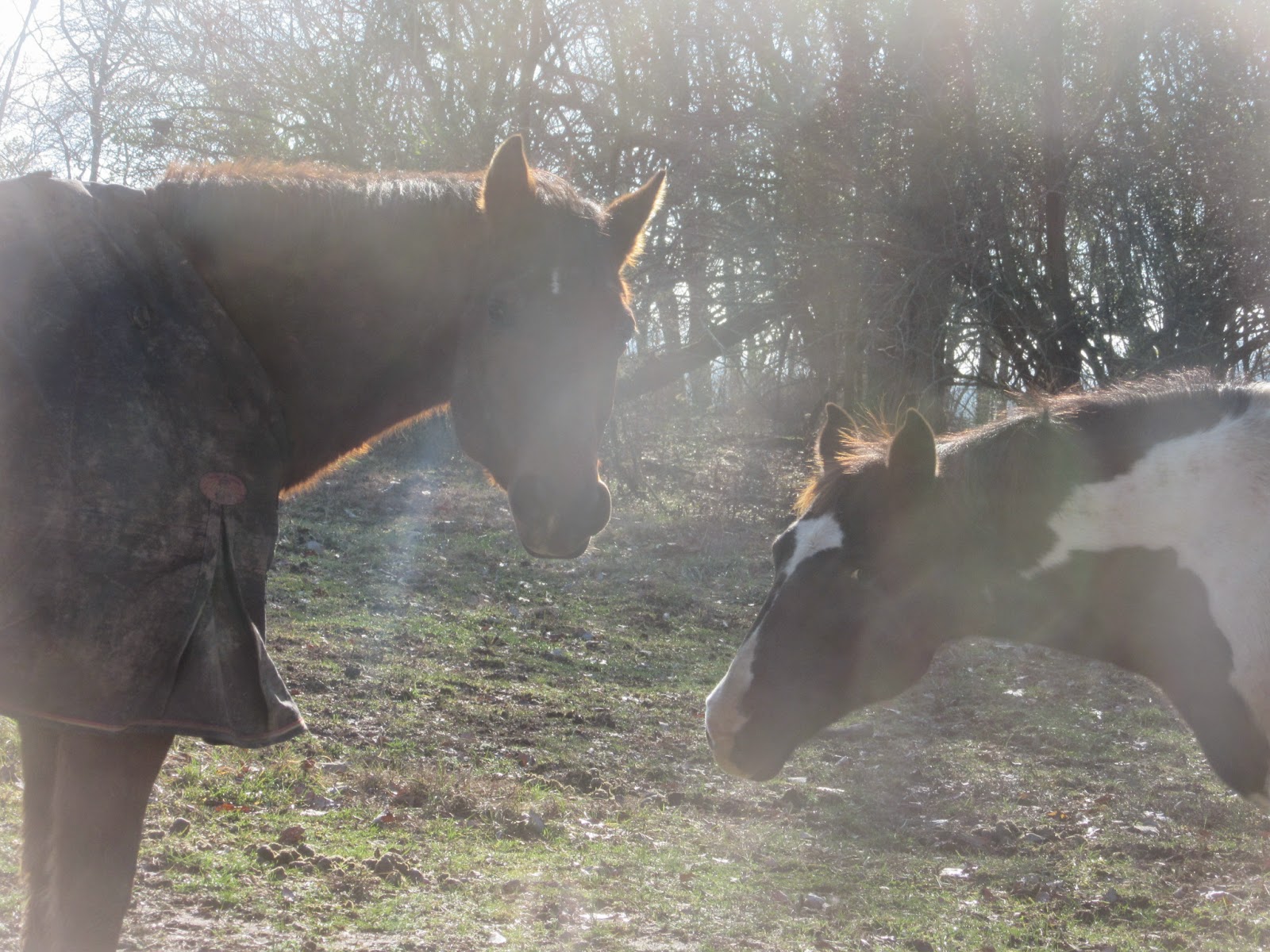 Chance and Ritchie were also being silly 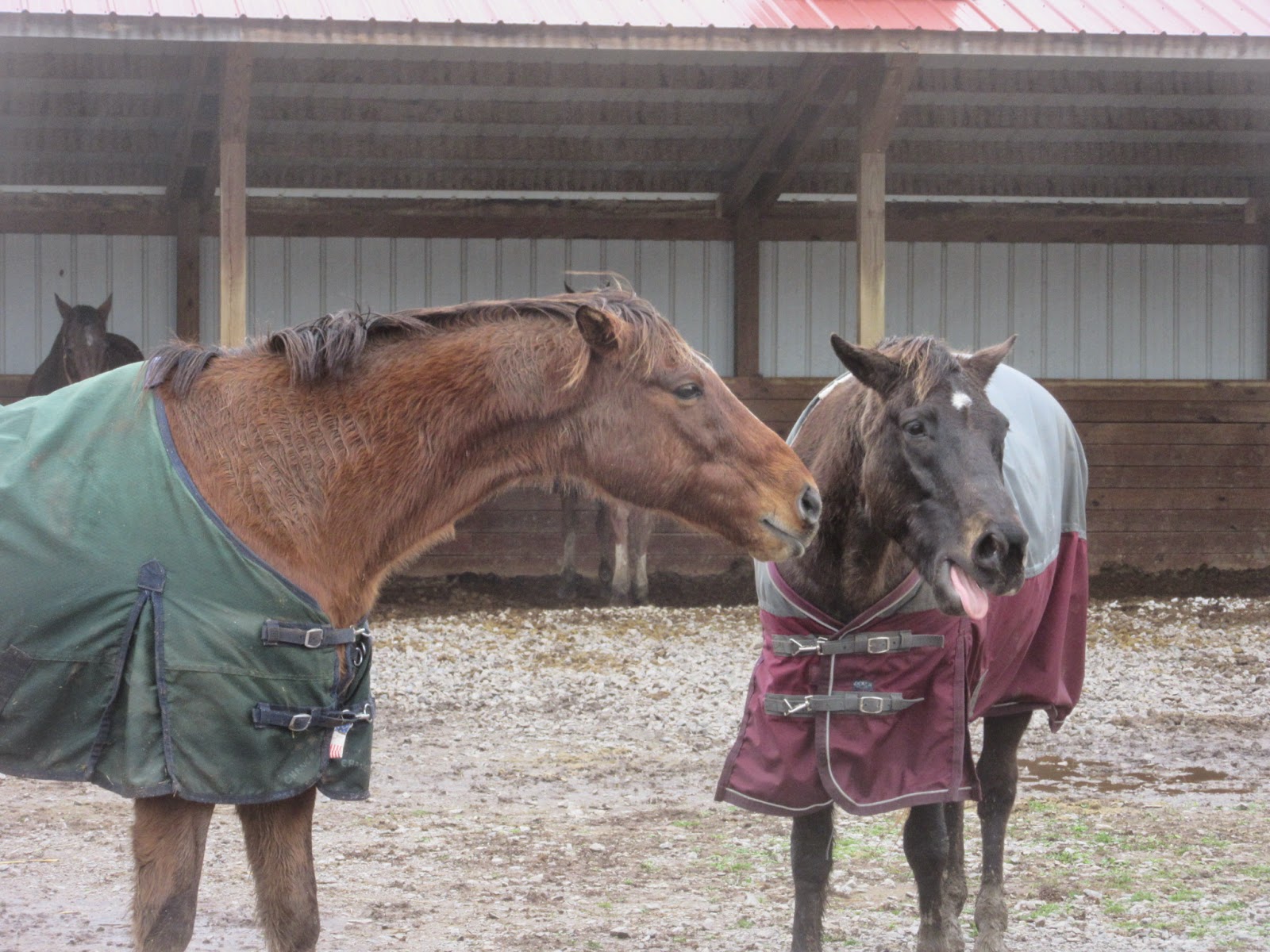 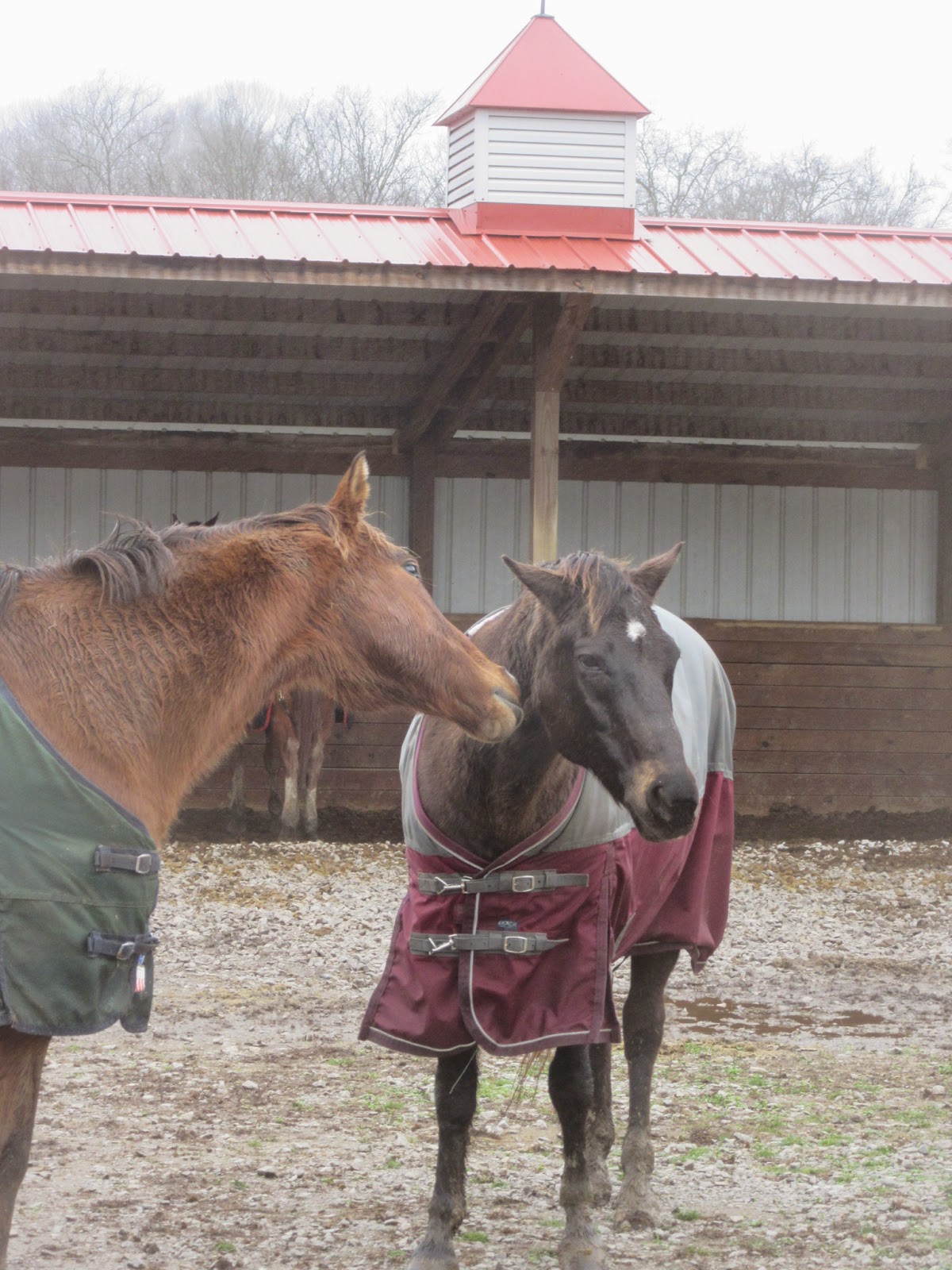 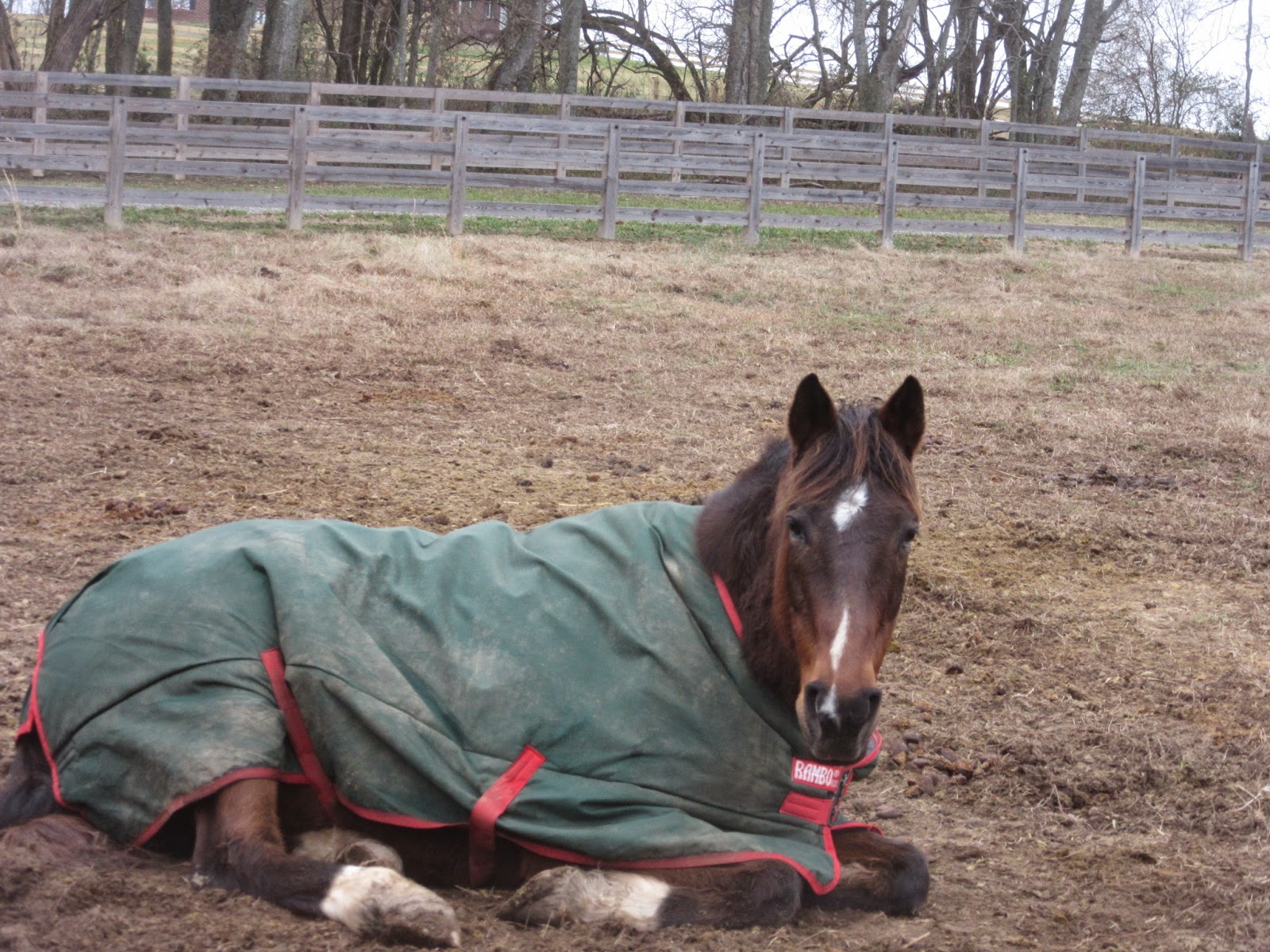 Posted by Melissa-ParadigmFarms at 9:25 PM

Yikes! Glad no one got hurt, in the SUV or in its path!

You have had one heck of a chain of events lately! Hopefully insurance will take care of the $$$$ fence. Did you find the wallet yet? Please do your BEST to have a Happier New Year!

If your local police dept. has a search dog in training that maybe they would like to challenge? Could be fun for them and a win for you. Hope you find it.

Hmmm... I would be feeling sorry for you, but remember a few posts ago that I (smugly) bragged about having an easier time of it than Jason when plumbing problems arise?

Dad and I tempted fate by congratulating ourselves on how prepared we were, and how quickly we got the job done - just before one of the fittings blew apart - soaking us.

Of course both the hardware stores had closed early so no replacement fittings, and it was cold enough to prevent the (wet/dry) cement from setting. Extra expensive super duct tape + light bulbs to the rescue. B and C's fake-ass plumbing rides again.

When will we ever learn?!

Happy New Year to everyone at Paradigm :D