We had a 72 hour stretch that didn't go well at all. It didn't start off too terribly. We had a resident that didn't want to eat Friday morning. He was doing the stand up, lie down thing and not wanting to eat. Of course we made an immediate call to the vet. It was about an hour and a half before the vet arrived. About five minutes before the vet arrived the horse in question made a complete recovery.  As the vet truck pulled into the driveway Mr. Suddenlyfelttotallyfine was acting completely normal and eating like his life depended on it. And he's remained that way ever since. Of course the vet did a thorough exam anyway, including a rectal, and concluded that the horse definitely was fully recovered from the probable gas that had ailed him. It is the best kind of vet call to have, no question about that.

Things got a little more interesting when we moved on from that to dealing with a downed tree on a fence. This wasn't just any downed tree, the trunk on this tree at the base was about six feet in diameter. A couple of the limbs would qualify as decent sized trees all on their own. And there it all was in a giant mess over our fence.

These are just some of the limbs from the massive tree that fell on the fence. It looked like half the tree line fell down but it was only one huge tree. Lucky us. 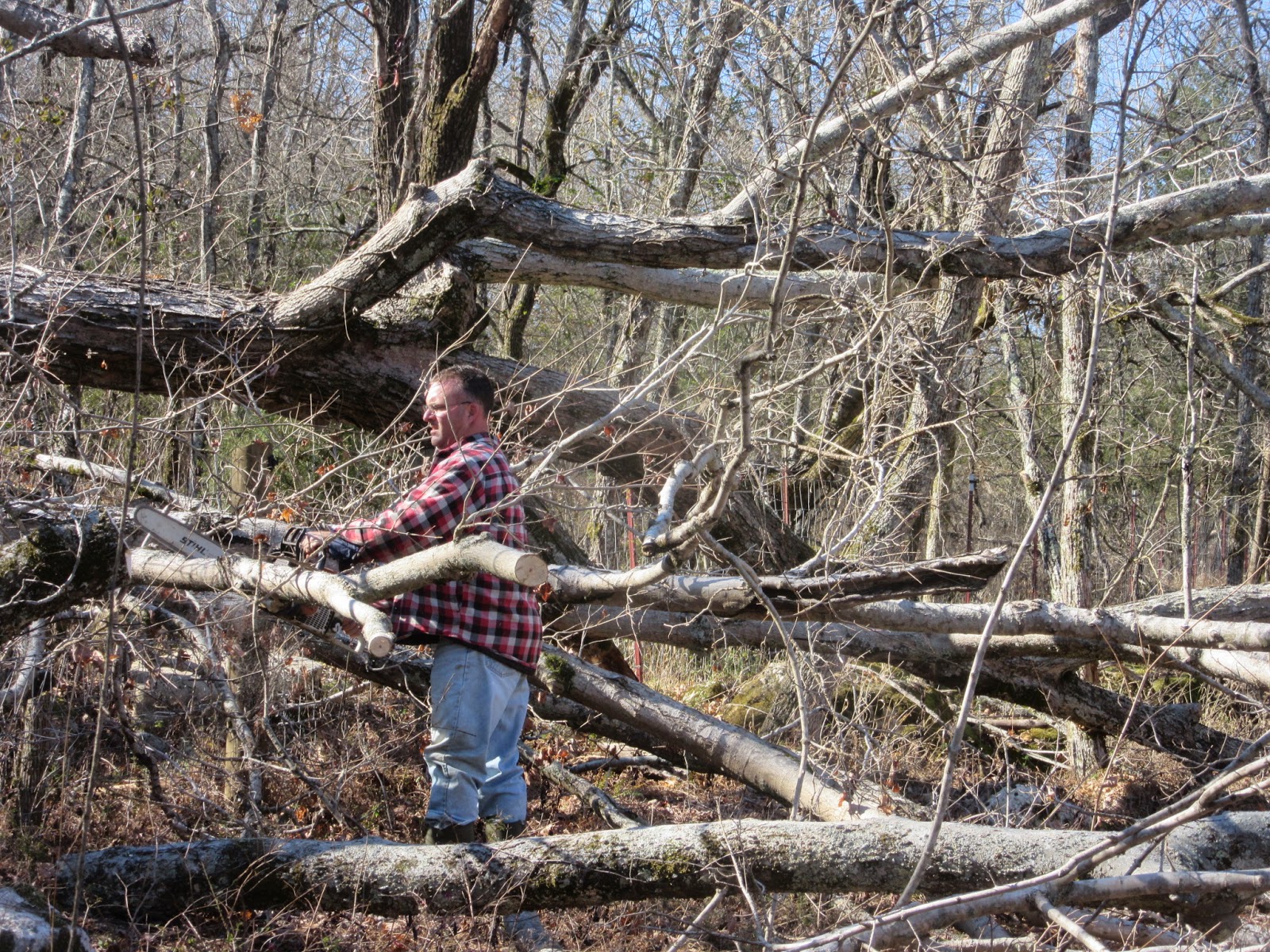 Jason of course bore the brunt of dealing with this tree. He sawed, he maneuvered huge limbs with the tractor, he sawed some more. At one point he tried to lift one of the tree branches off the fence with our 100hp, 4WDtractor. The entire tractor tilted to the side with only two tires on the ground. Jason quickly abandoned any notion of trying to lift parts of this giant tree off the fence. Sawing was the only option.

After getting his chainsaw stuck in this tree four times Jason finally gave up. We were able to get several of the limbs off the fence and mostly repair the fence. It doesn't change the fact that two massive limbs plus part of the trunk are still over the fence (but not touching it) and must be dealt with in the next few weeks before they finally fall on the fence as well.

I asked Jason if we should call Pee Wee. No joke, there really is someone in our lives named Pee Wee. We first met Pee Wee about a year and a half ago. We were having more electrical lines run on the farm and the utility company needed some trees removed in order to run the lines where we wanted them. We weren't about to tackle these trees ourselves (we're stupid but we're not THAT stupid) and someone at the utility company gave us Pee Wee's number.

Pee Wee has a former utility company truck with a giant saw on an arm. If you are wondering what Pee Wee looks like he weighs 300+ pounds and he doesn't have a whole lot of teeth. We have no idea what his last name is, or maybe even what his first name is.  All we know is Pee Wee, the man, the myth, the legend. Pee Wee works for cash only so we only ever got his first (I guess?) name.

We were most appreciative of Pee Wee and his quick work taking down our trees the first time around. When I brought up bringing in Pee Wee in to deal with the rest of our gargantuan tree Jason, in a rare display of taking my good advice when I offer, agreed with me. I almost didn't know what to say. Despite the fact that I was speechless I was pleased we were going to let Pee Wee come to our rescue again

We only had a few minutes to pat ourselves on the back and celebrate the fact that we had managed to not maim our kill ourselves, our tractor or Jason's chainsaw. It was back to feeding horses and right back to another vet call. One of the horses had managed to give themselves a lovely puncture wound, one that made us both go "O-M-G" when we first saw it. After my first look I looked again and pronounced it looked worse than it actually was and couldn't be stitched. Our second vet visit of the day later I was proven right by the vet. The patient was very good as the vet scrubbed and cleaned, we started a round of antibiotics, and finally called it a day.

I told Jason that we had surely had enough drama to last us for awhile between two vet visits and needing to call Pee Wee, all in one day.

I was wrong. I was so very wrong.

Mick and Lighty were having a great time; Africa wasn't impressed enough to stop grazing. 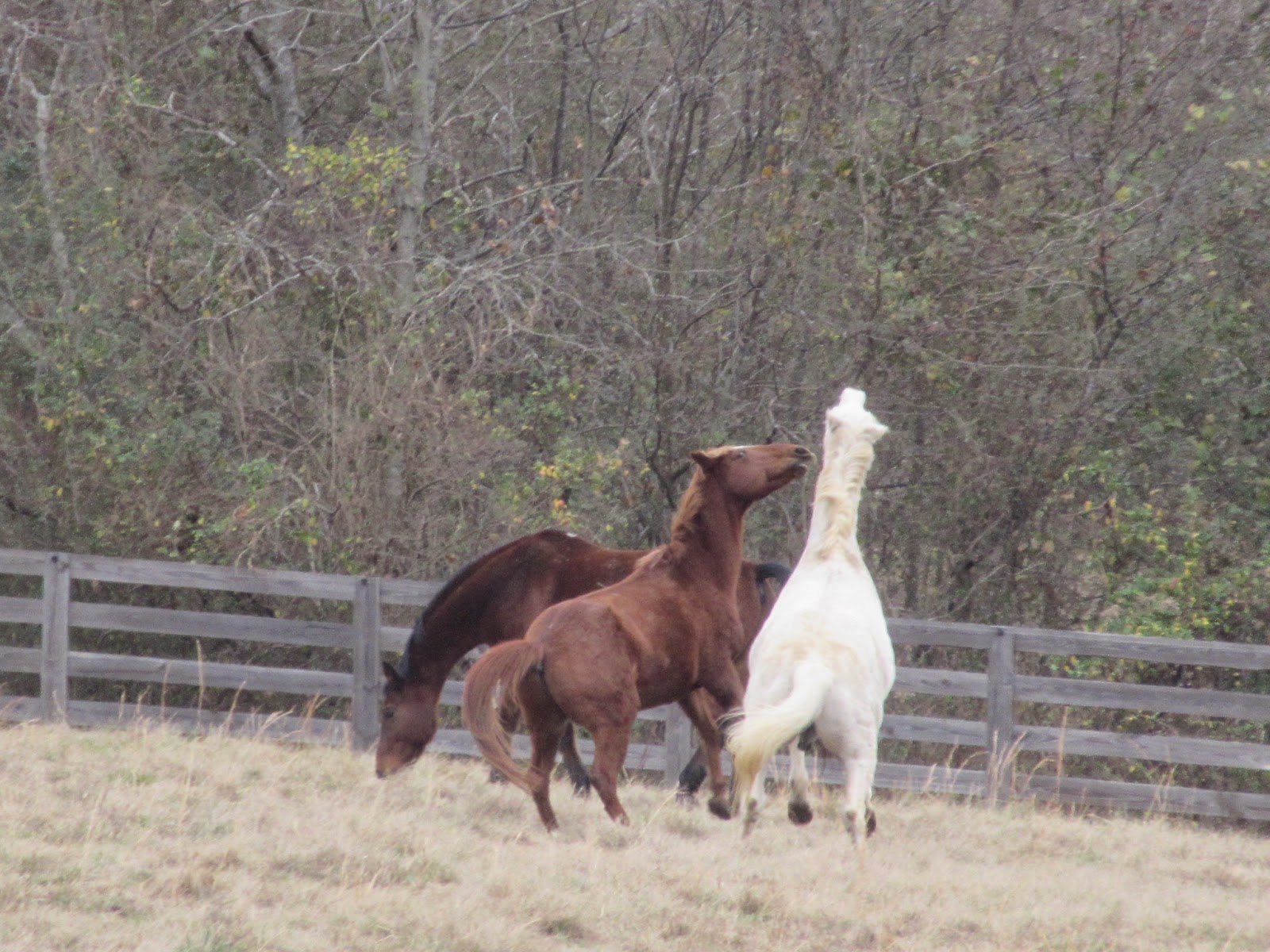 I wonder if Lofty, Silver and Romeo realized what a pretty sunset they had 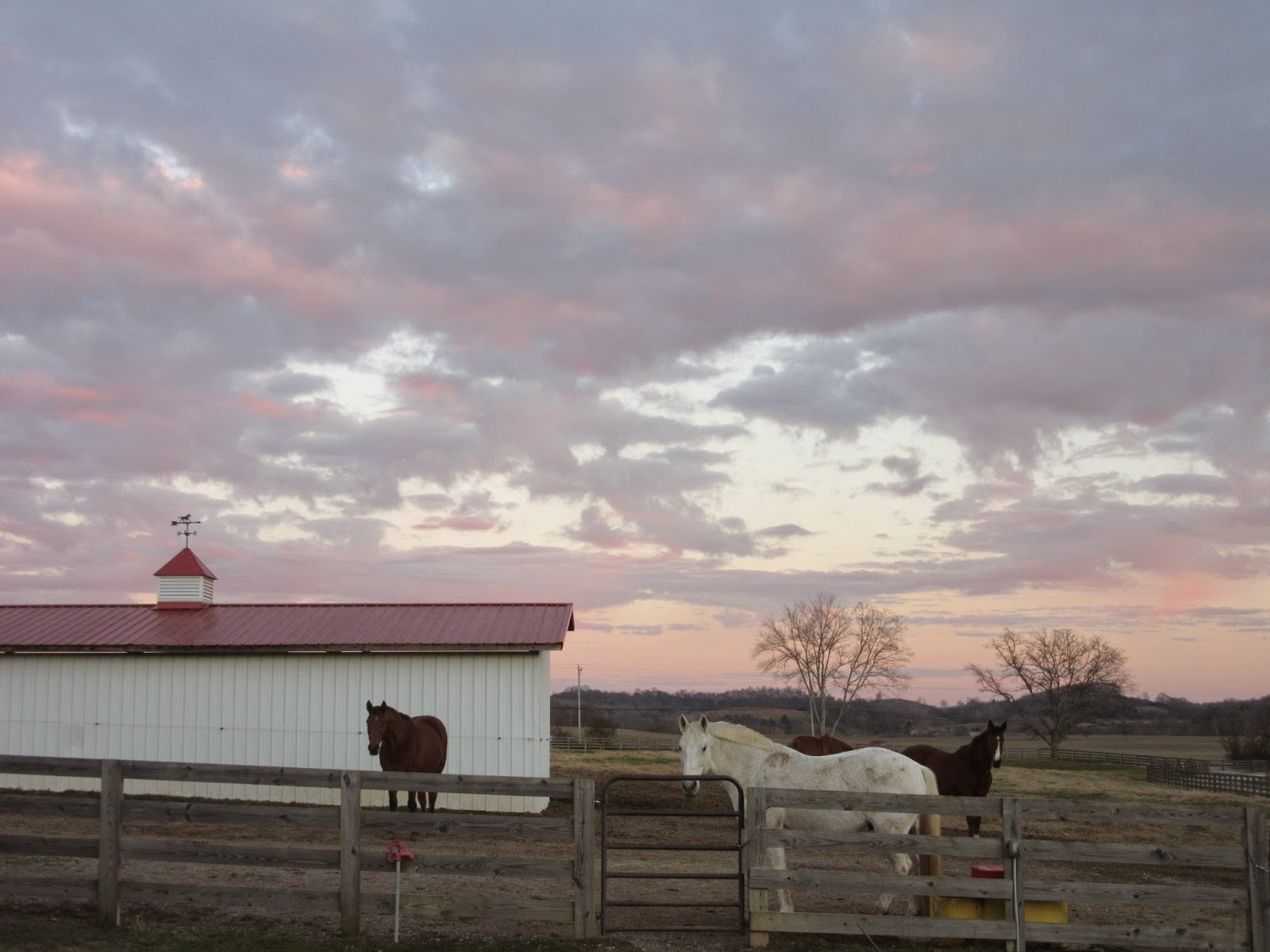 We had a pretty sunrise as well 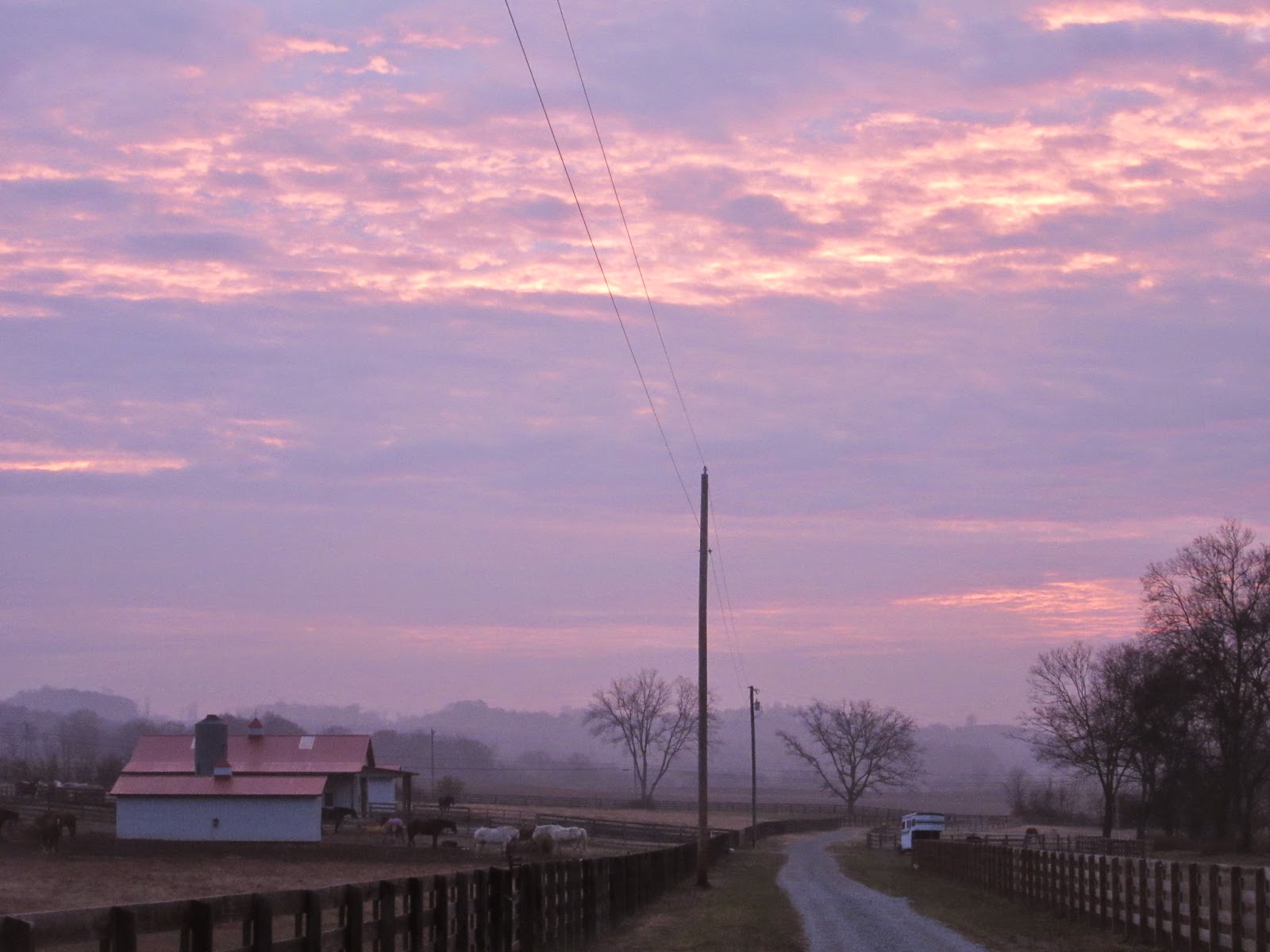 Donneur under the pretty sunrise 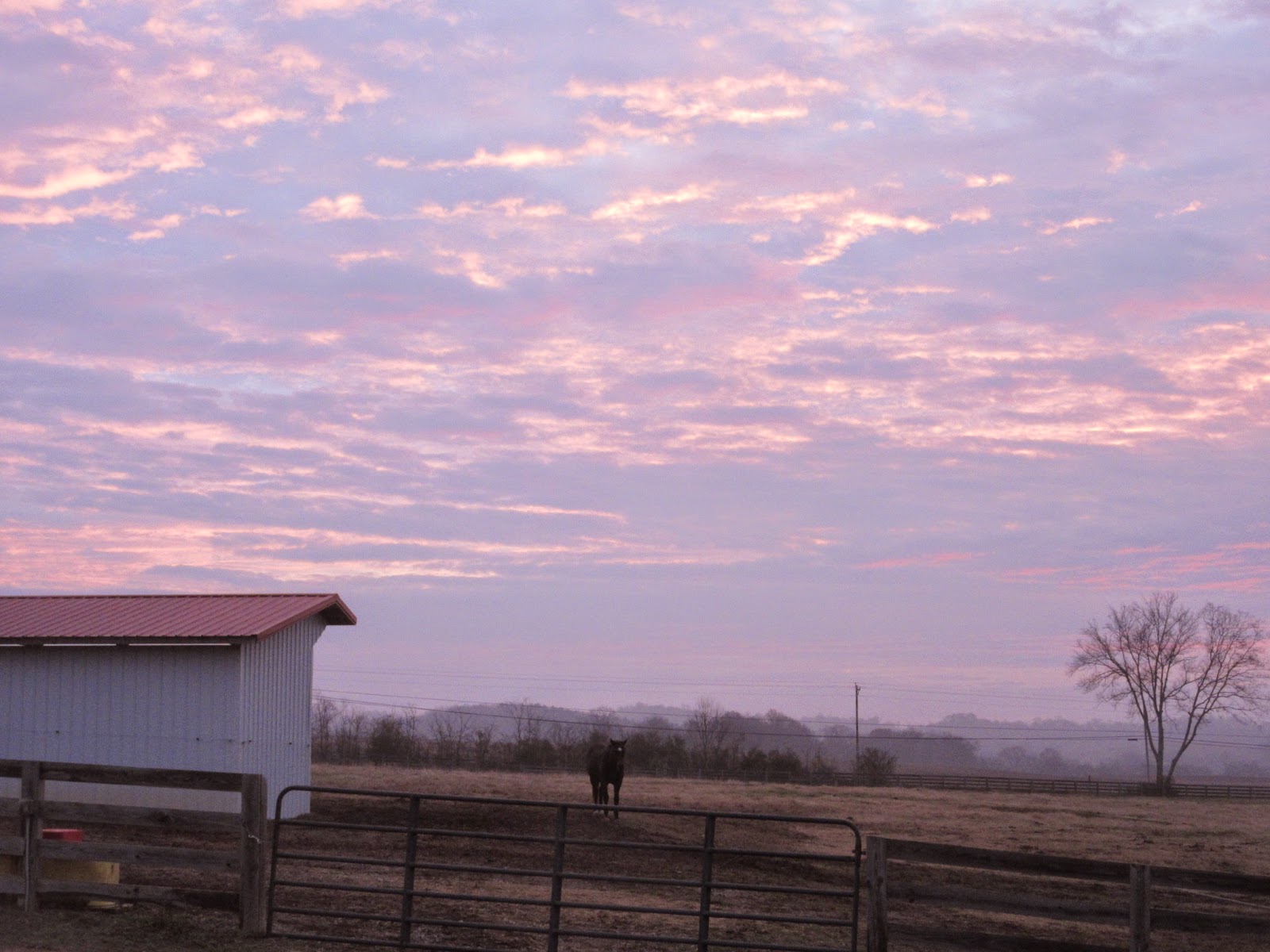 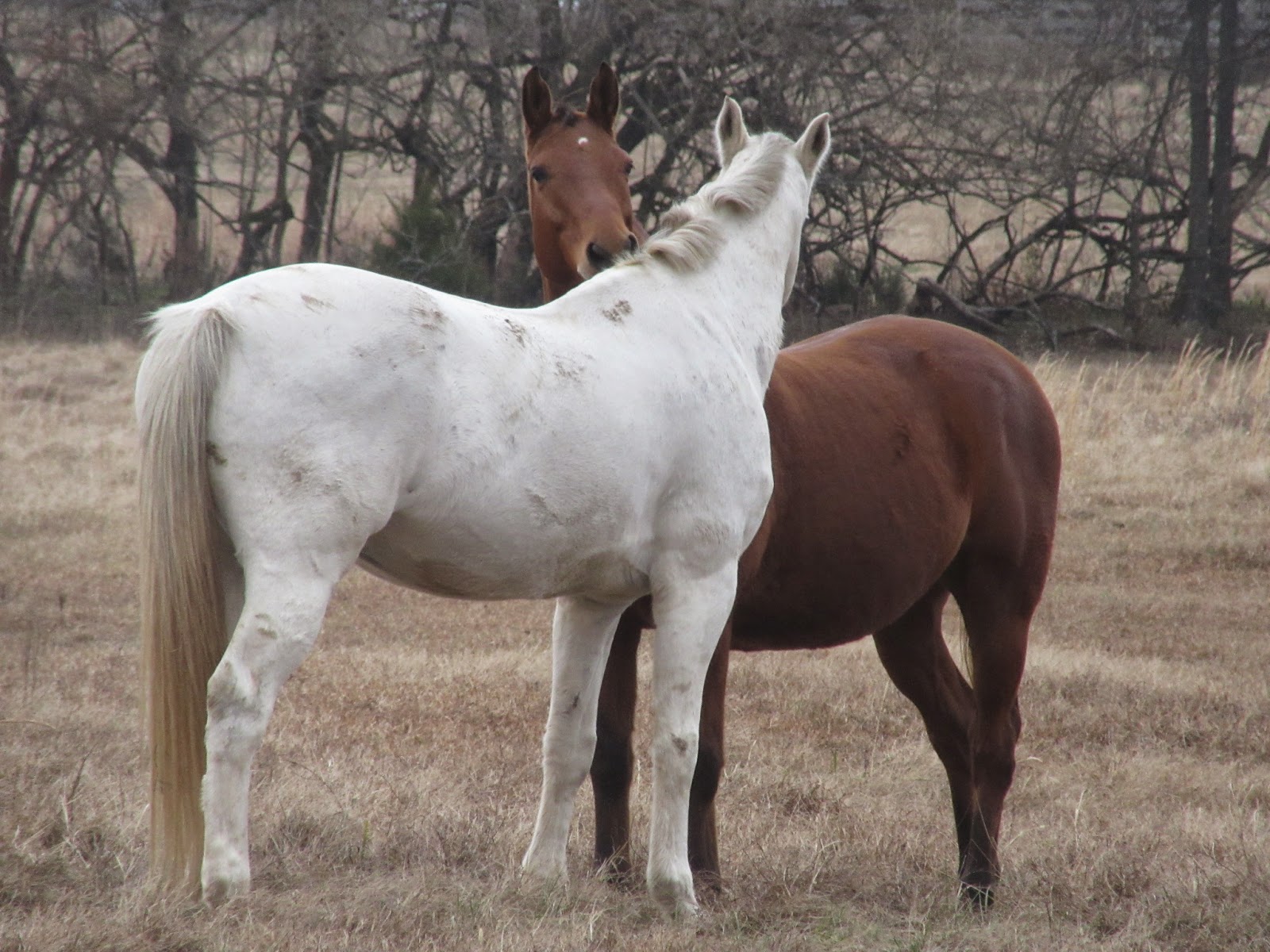 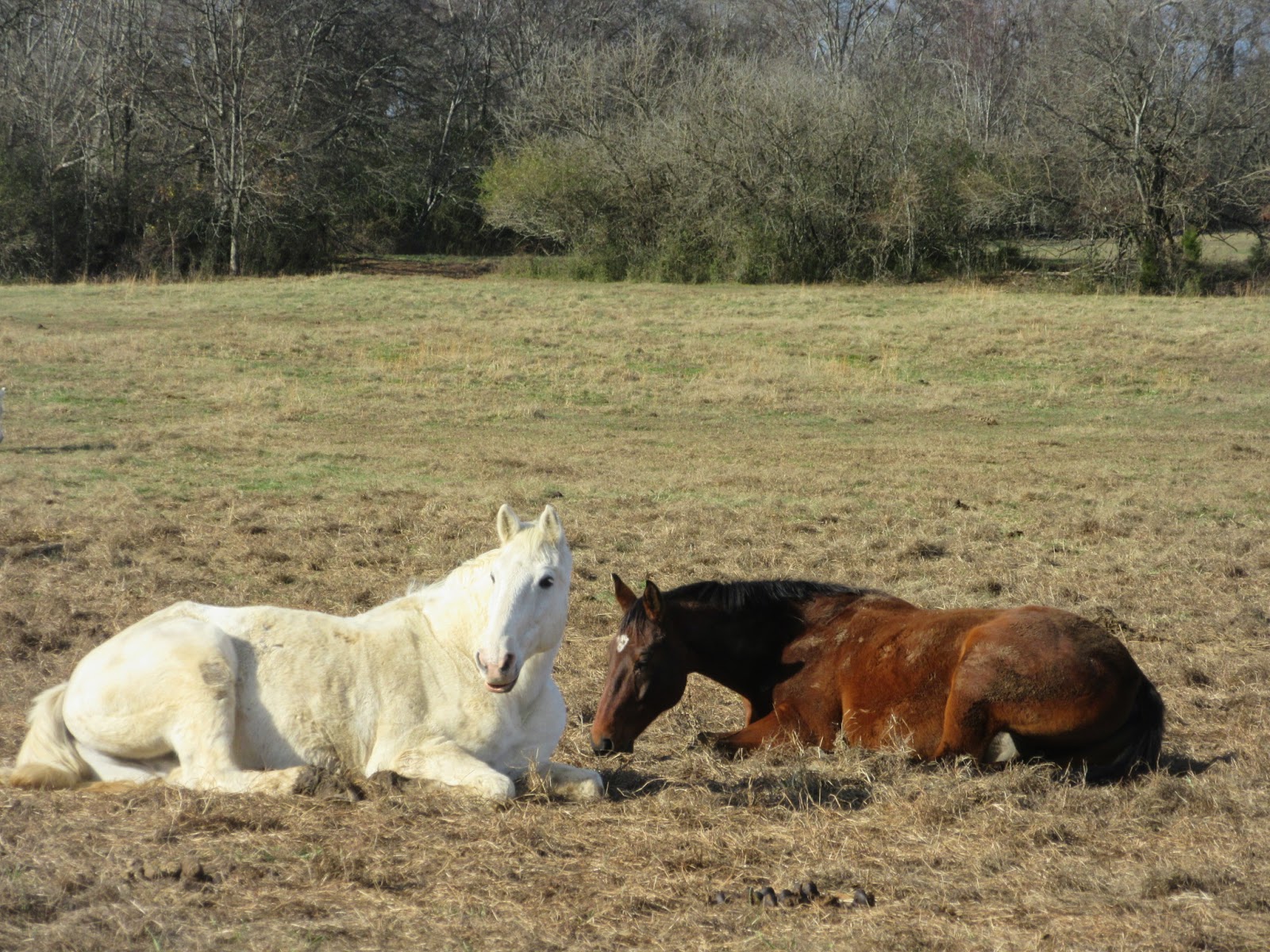 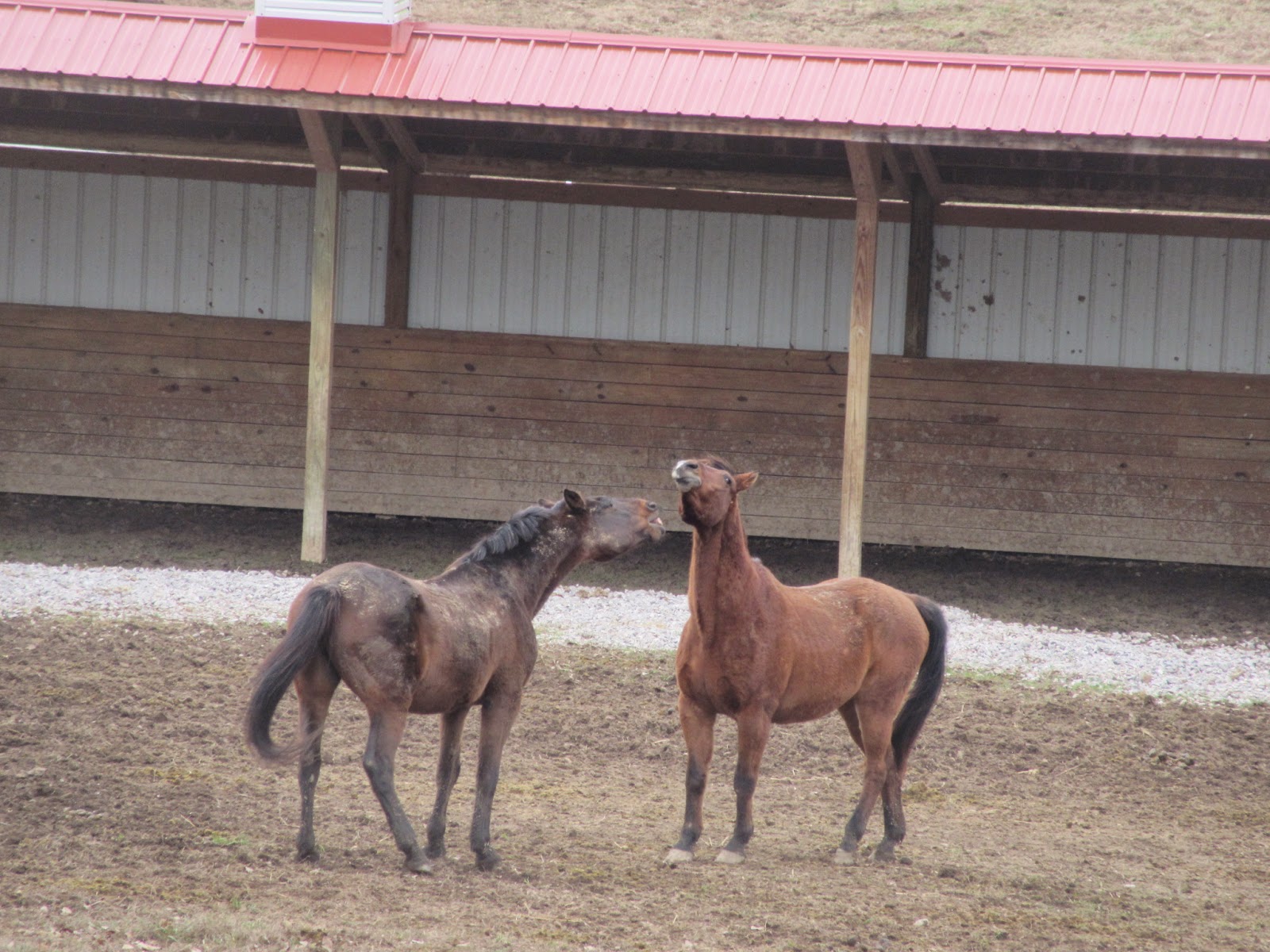 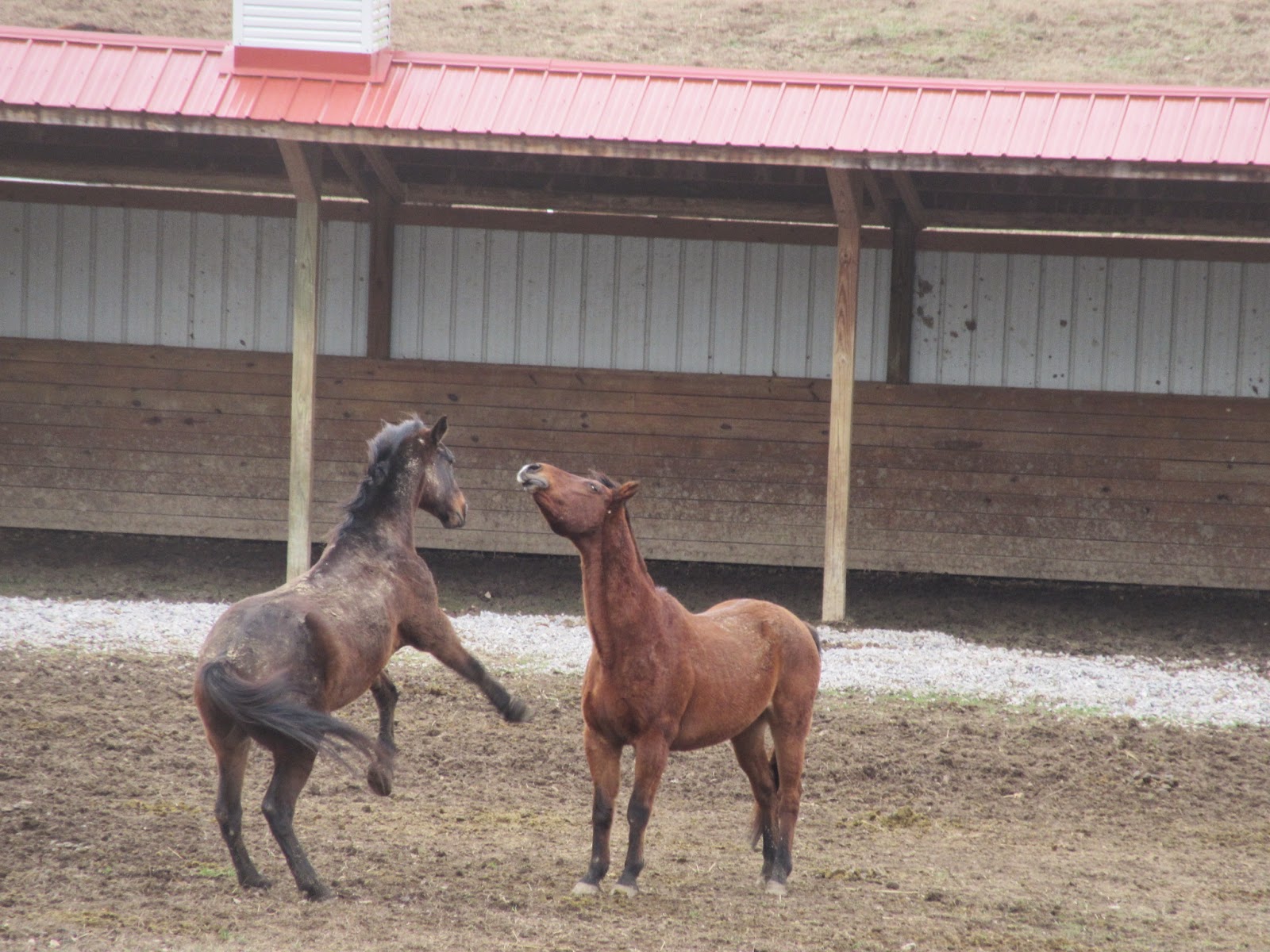 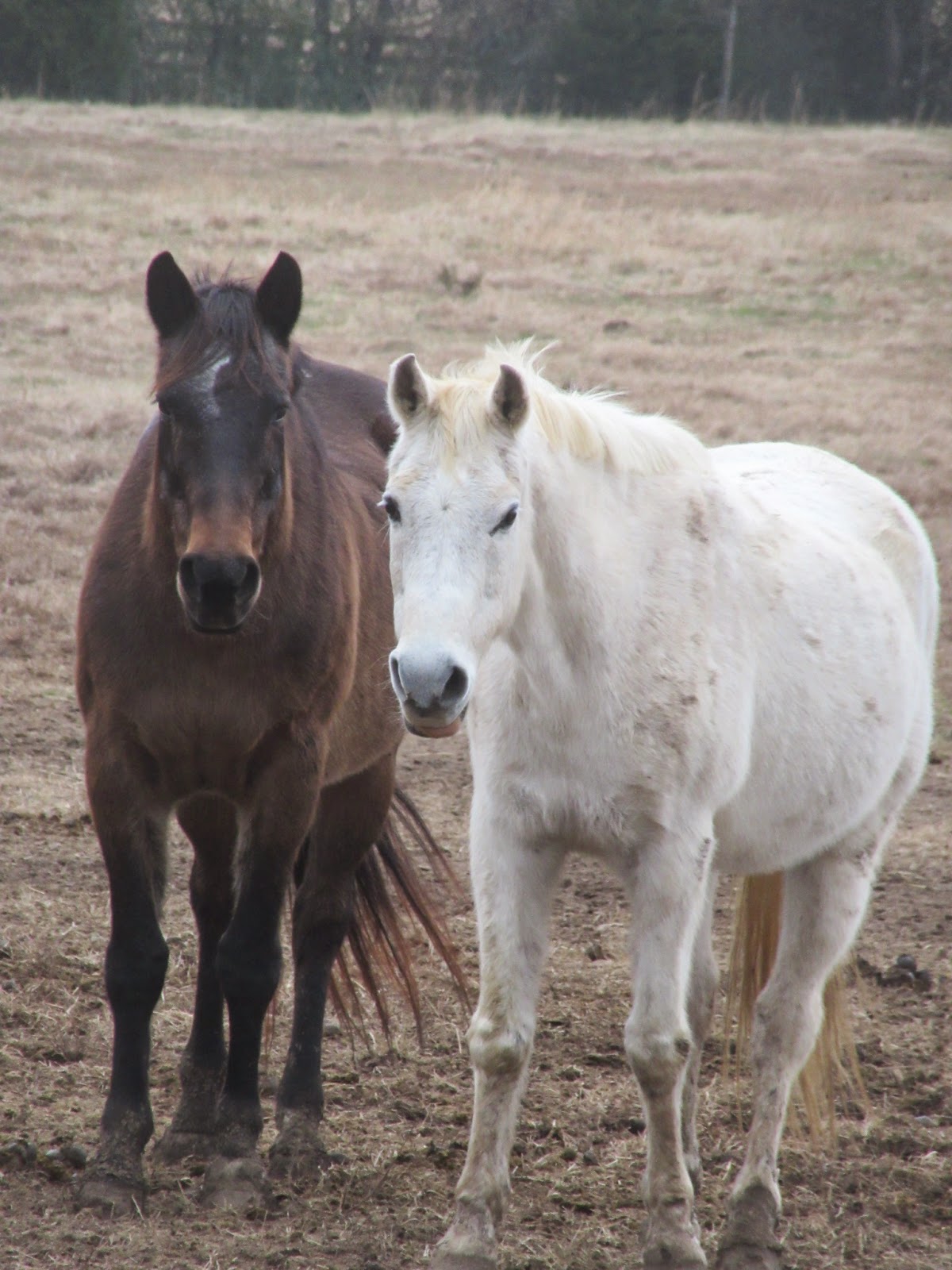 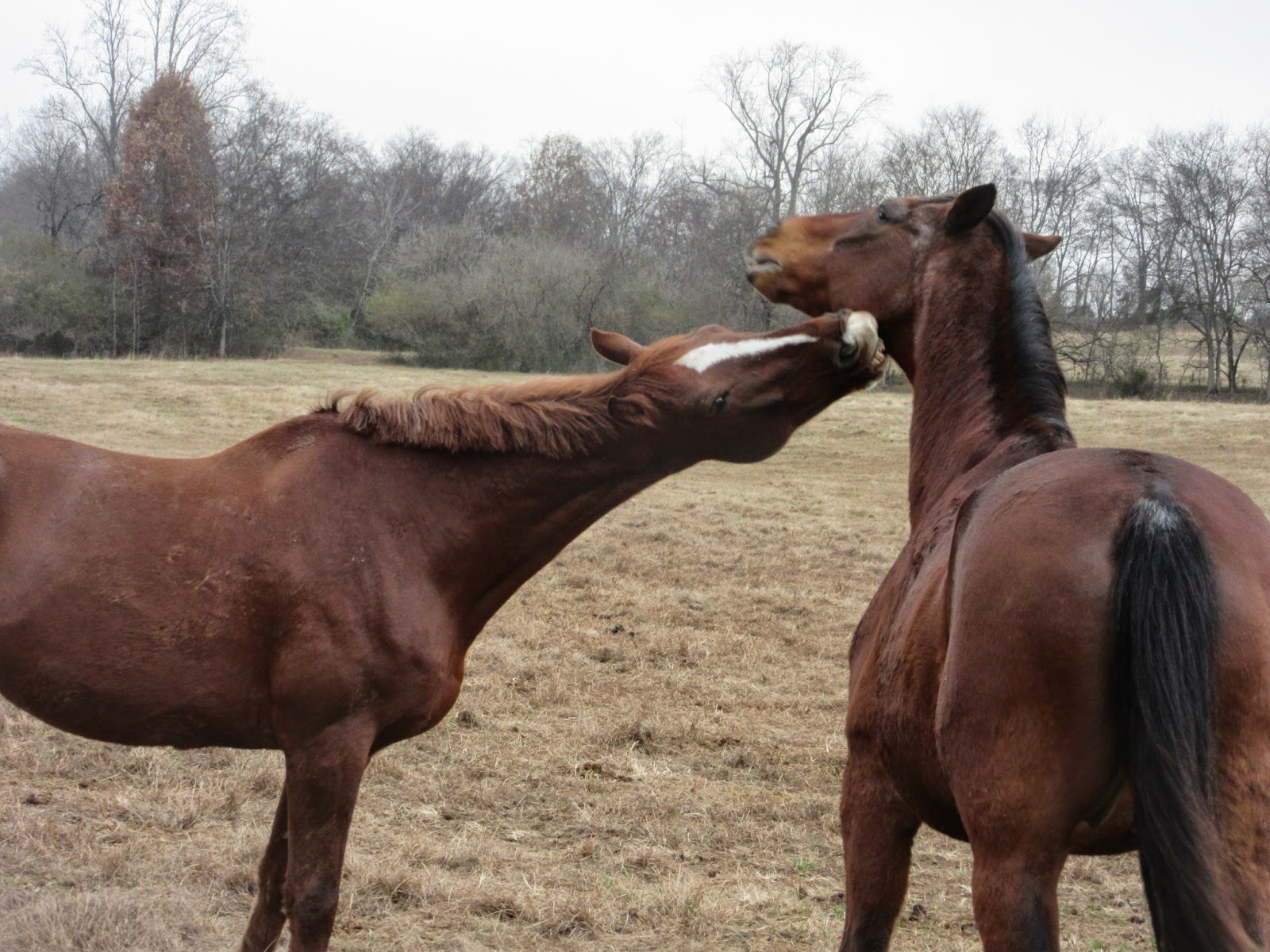 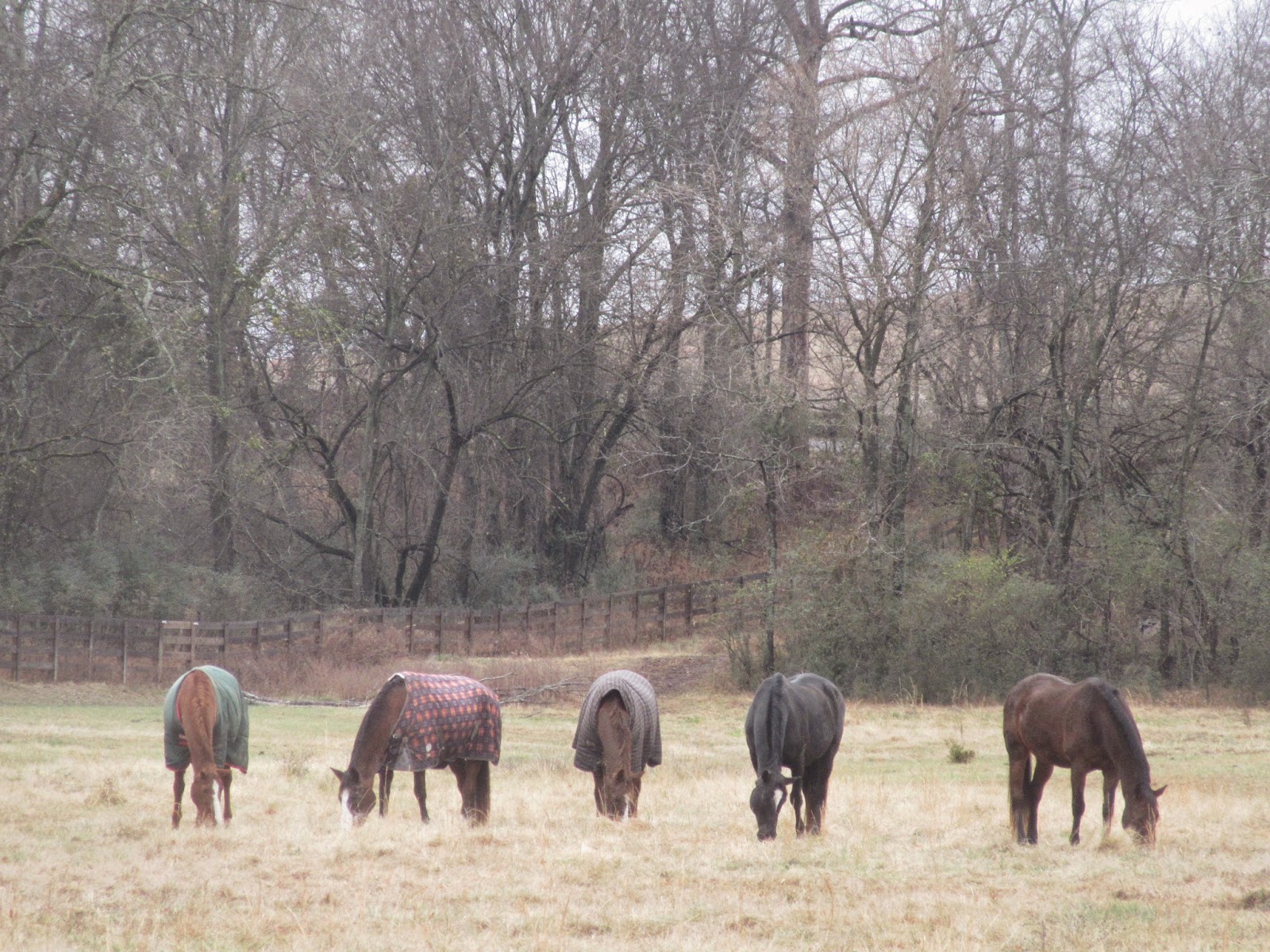 Dolly leading the way followed by Cuffie and Norman 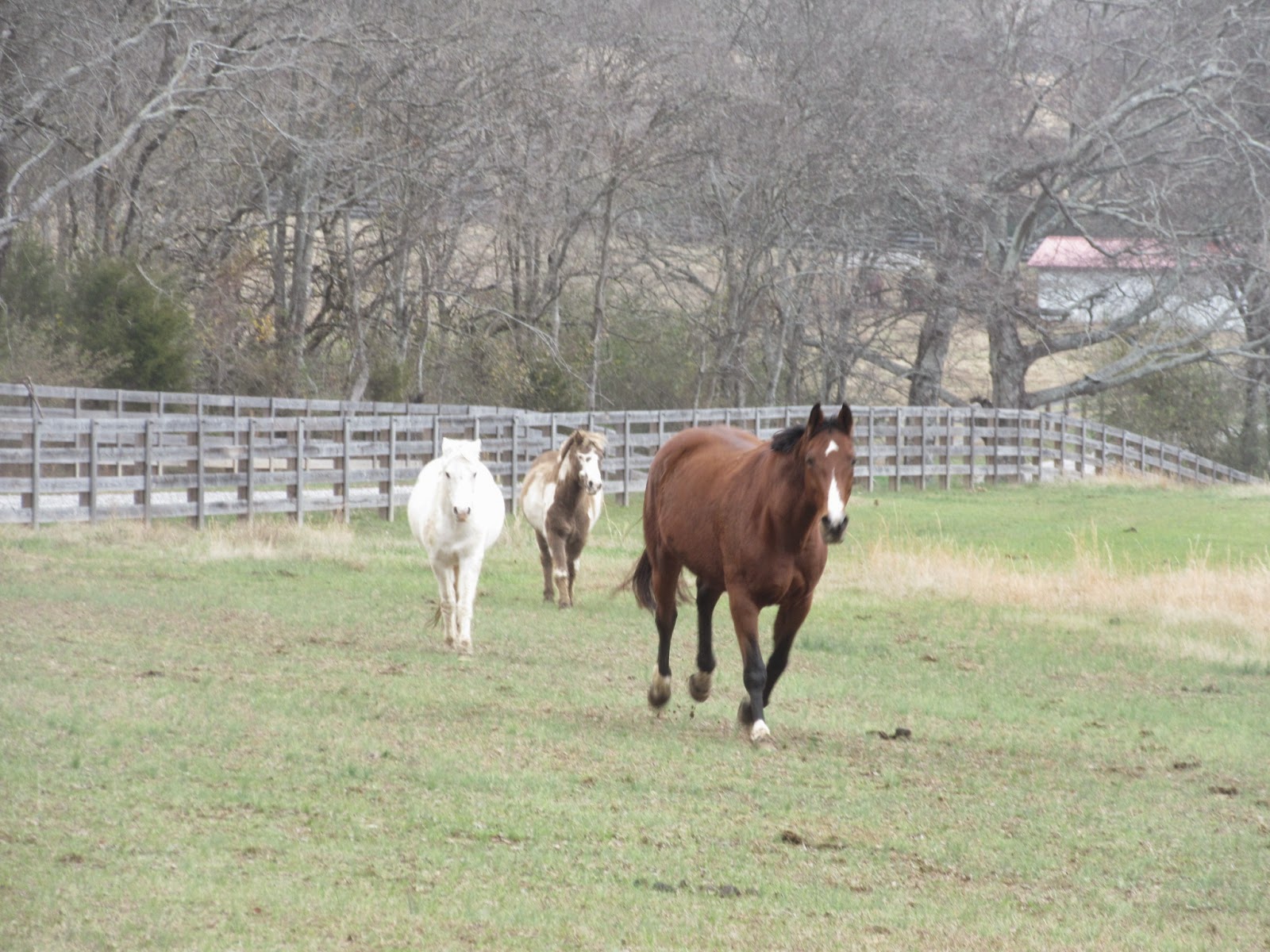 Posted by Melissa-ParadigmFarms at 6:10 PM

Ooo, a cliffhanger!!!
I don't know if I want to know what's coming next...

Everyone needs a Pee Wee in their life...

Our PeeWee is called Frisco Mo. Yours has better credentials than ours.;D