Bonnie and Sky both had massages this past Friday. It has been several years since I've had one of my horses massaged. They are regulars for the chiropractor a few times a year but I felt like something more was needed. My biggest issue with Sky has been head lifting/tossing. We've made huge strides in that department but it is an ongoing issue in our work. We've worked away at the problem through dressage work but especially during canter to trot transitions or while jumping it is still a habit. Often during the trot or canter, even when she has good swing in her back, good push from behind and she generally would have looked the part of a horse on the bit, it still didn't always feel right, like she couldn't get to a comfortable place and then stay there.

I didn't say much at first to the message therapist, I wanted to see what he found. I am working with Richard Valdez, an amazing message therapist in our area who has travelled to the World Equestrian Games in the past with our equestrian team as their official message therapist. As it turns out poor Sky had major issues throughout her neck, although her back and hindquarters all felt pretty good. At one point when Richard was working on one of the very troubling spots on her neck Sky actually turned around with ears flat back, mouth open and teeth bared, it hurt that much. I was shocked, she has never even thought about pinning her ears at a person, much less gone after someone with teeth bared!

Richard spent the better part of an hour working on Sky's neck and shoulders. Sky never got to the point of enjoyment although she did stop trying to take a chunk out of him. Richard will be back on Thursday to work on Sky again. He said he made good progress but he did not get "good resolution" as he put it. He said what he was feeling and working on felt old and set and that if I was up for it Sky definitely needed at least one more session, maybe more.

I can't wait to see what she feels like after Richard feels he has really worked through some of the issues. My last three rides on her, including my lesson today, have been truly amazing. She is SO much softer throughout the entire ride. No head tossing at all since the massage. She still lifts her head for a half stride in a canter-trot transition but softly accepts a half halt now and we go back to our happy place.

My trainer was very impressed with our flat work today. When we started jumping she was actually whistling, whooping and clapping for some of our jumps. We could usually get a few good, soft, round jumps scattered in with a lot of tense jumps. Today Sky was so soft to the jumps, and then she would rock back and fire off the ground into this gorgeous bascule with high, tight knees, but land and canter away softly. She did this over every jump, every time. It was amazing and I hope we keep it up!!

It also made me feel guilty and made me regret not doing this sooner. It is one of those things where I kept meaning to call and schedule the appointment but for one reason or another never got around to doing it. Bonnie did not have the acute problems like Sky did but she definitely had some sore spots in her shoulders, more on the left than the right, and a spot on her hindquarters. The left is definitely her stiffer direction, and she definitely felt looser through her shoulders and her entire front end after the massage. It was easy to see Bonnie progress from "that doesn't feel good" to "wow, would you do that again??" All in all the Friday massages were a great success and hopefully more good things will come when we see Richard again on Thursday. The only thing missing in all of this is MY massage . . .

Lily and Thomas grooming over the fence 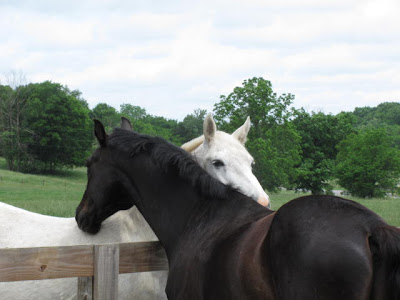 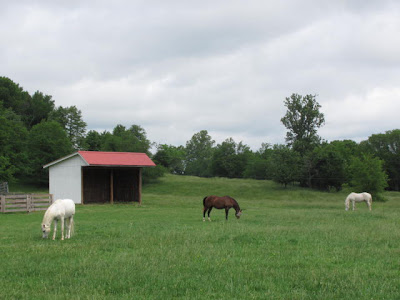 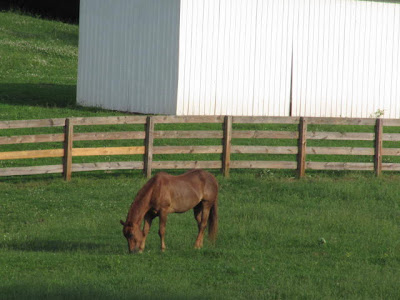 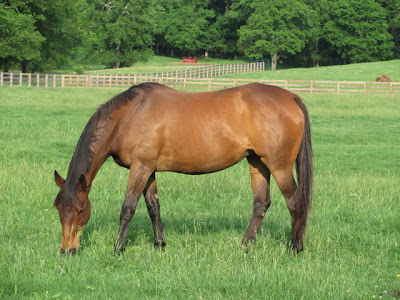 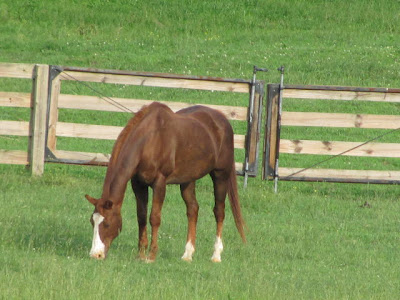 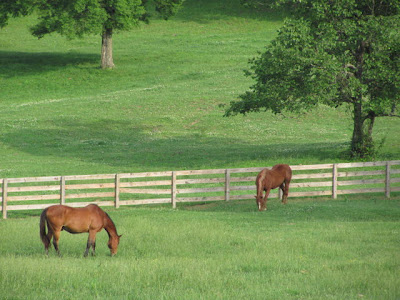 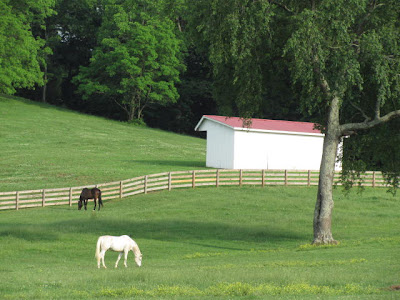 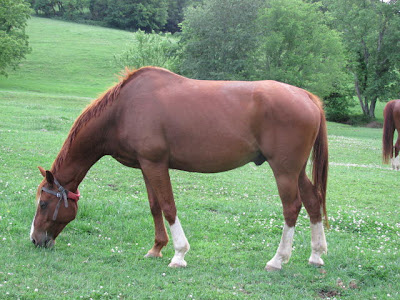 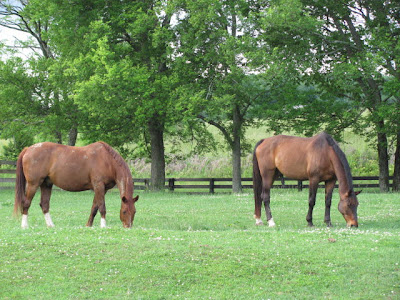 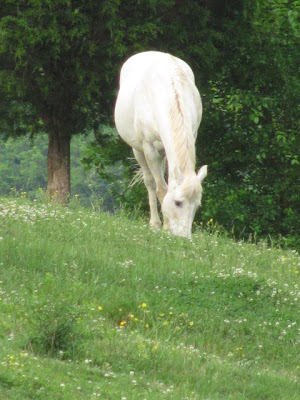 Posted by Melissa-ParadigmFarms at 8:50 PM

Glad Sky's on the way to feeling better.

Could you e-mail me the Lily grooming pic - and do you mind if I also post it on my blog?

Kate; Sure and please do !

Fugly - I unintentionally lost your comment this morning; please re-comment and we'll try to repost...hopefully successfully this time ! :)

Impressive!
I usually go for the soft tissue more than the bone adjustments...bones are stupid and muscles have memory.
So happy to hear of the riding progresses too...it will get better, just like it does for us when we regularly get that kind of therapy..sweet relief!
GORGEOUS photo of the grooming session!
KK

It must be satisfying to see a positive result like that, it's clearly worth it. It makes sense to do massage and chiro since the muscles can pull other things out of whack.

I've already decided that when I get a horse I will get massage and chiro assessment so I know what I'm working with. I worry about being able to find a truly skilled person as opposed to a self-proclaimed MT. I'm sure I can verify certifications but still, it seems like an area that could be a bit dodgy.

Wow, I would have expected the caption on the first photo to be "Lily killing Thomas over the fence." You certainly have a magical place there. :)

I am so glad the massage has been working for you. He sounds like he is quite an accomplished equine masseuse. Apollo had a couple of massages over the years as finances permitted. I love massages for myself but have not had one since before I broke my shoulder and all those ribs in my accident with Lynx two+ years ago. I know how frustrating the headtossing can be as that is the problem with Red, the horse I lease now. I find that the rounder I get him, the less he tosses. We went out at First Level for the first time last Sunday with great success. Good luck with the body work and keep us posted!