We had a cold weekend. High's in the low 40's and low's in the 20's. I am thankful that our high's will be back in the 50's this week. As I mentioned in a recent post I have decided to address winter weather head on this year instead of just slogging through the next 90 days trying to pretend it is 80 and sunny. My new Ariat insulated paddock boots arrived on Friday afternoon. I wore them during morning chores on Saturday and my feet were warm, it was great!

After we finished morning chores I tacked up Sky to go for a ride, complete with long underwear, an ear warmer, coat, gloves and insulated paddock boots. I was feeling so smug getting ready to ride in the cold with my winter gear, the only part of me that was cold was my face. Maybe I should get one of those ski masks?? Then my smug self realized I couldn't zip my half chaps over the new paddock boots. Since they are insulated they are a lot wider around the ankles, apparently too wide for my chaps. I was crushed. I stomped around the barn like a two year old having a temper tantrum while Sky watched me. I had to put on the non-insulated paddock boots and have cold feet while I rode the horses (yes I realize life could be a lot worse!).

In other cold weather news apparently Cuff Links has learned the fine art of blanket removal. Those of you that are fans of our Facebook page already saw the picture of Cuffie's blanket lying neatly in the pasture, perfectly folded in half, not trampled or torn, all of the straps and surcingles still attached. As I said in the picture caption on Facebook, how do they do that?? I put it back on him and all seemed well. When I fed him first thing the next morning I noticed there was a white horse at the hay feeder. Since everyone should have been wearing a blanket it should not have been possible to have a white horse at the hay feeder. Cuffie had removed his blanket again. Just like the day before it was neatly folded in half in the field, not trampled, all straps and surcingles still done up. Since I was taking off all blankets anyway I just shook my head and looked at it as one less blanket to remove. I did put blankets back on this weekend and he has kept his blanket on with no issues for the last two days. However, tomorrow is a new day so maybe he will greet me naked again.

Just as a reminder we do have a page on Facebook now. If you type in Paradigm Farms in the search box you should find us on Facebook. We've been good so far about updating the page with a picture of the day each day. And it is a picture taken that day, not running behind like I do on the blog.

On to an abbreviated farm tour and some pictures. As in the last post there are red links you can click on in the photo captions to read more about some of the horses.

View taken from the end of the driveway facing the road 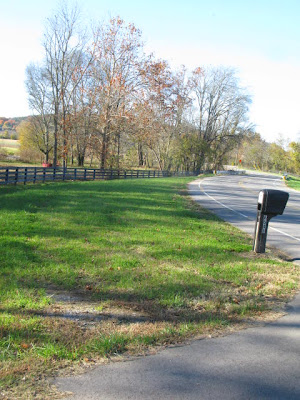 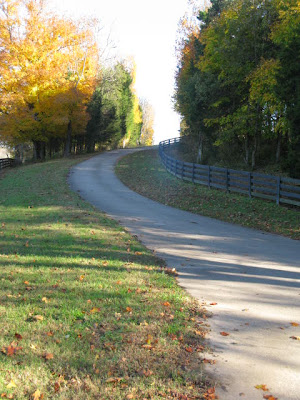 After the first curve you see the WHOA sign 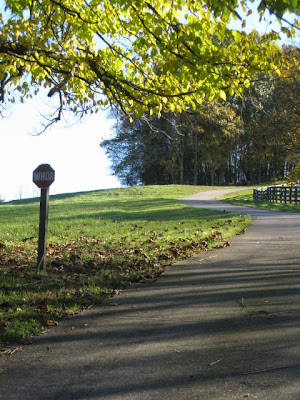 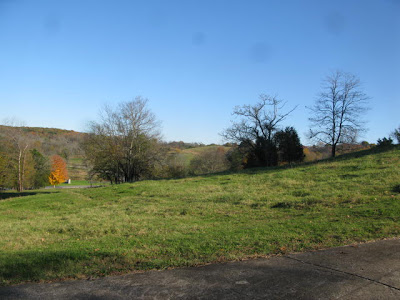 One horse pasture is to the right of the driveway; this shot was taken after the second curve in the driveway at the top of the hill 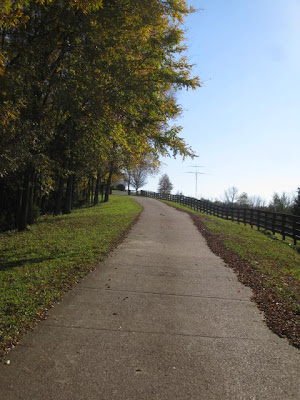 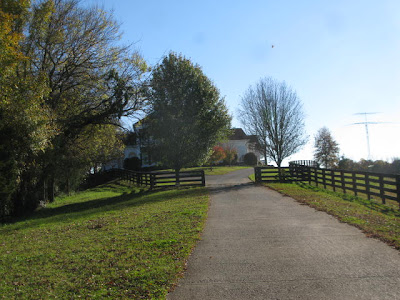 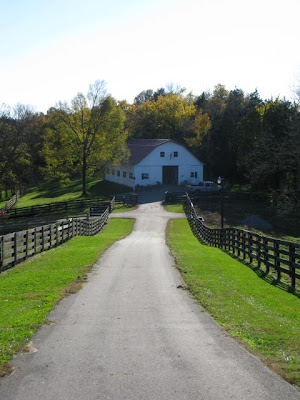 Behind the barn is the paddock where the goats live and the equipment shed. The rest of the pastures do not meet up with the driveway or the barn. Thus, it is a very abbreviated farm tour! 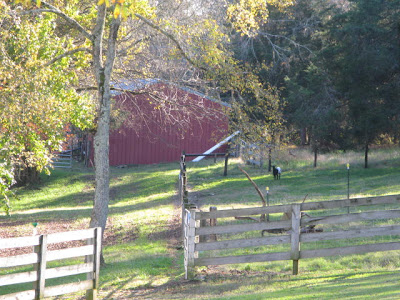 Sparky the donkey, Cinnamon, and Norman were making their way through the woods 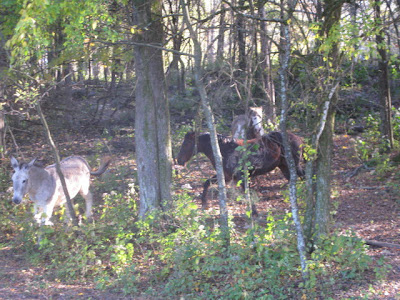 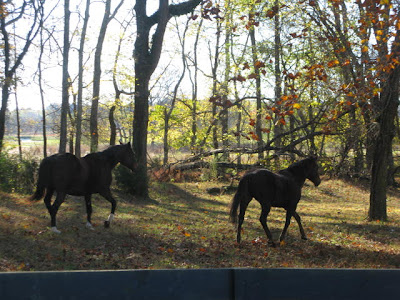 Norman came cantering along to catch up with them 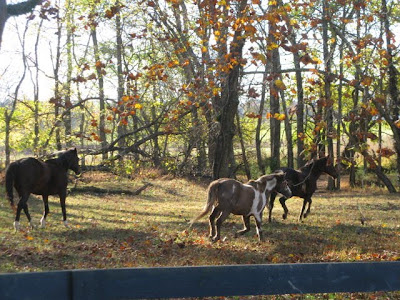 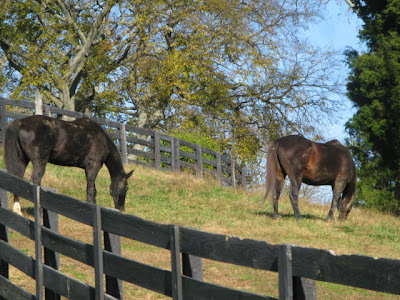 Bonnie is a swedish warmblood and one of my horses 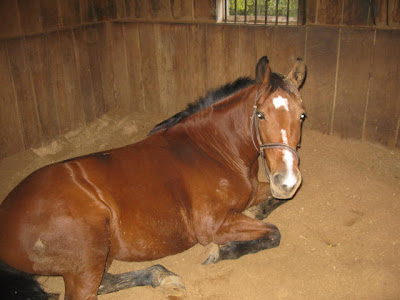 O'Reilly is an Irish bred gelding retired from the jumpers 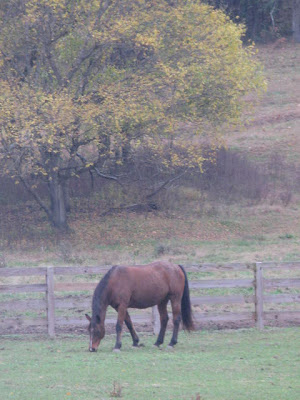 Lightening and Snappy grazing. Lightening is an Arabian and retired trail horse. Snappy is a Polish bred gelding who competed through the 4 star level in eventing under the guidance of Mark Todd before switching careers to the hunter ring. 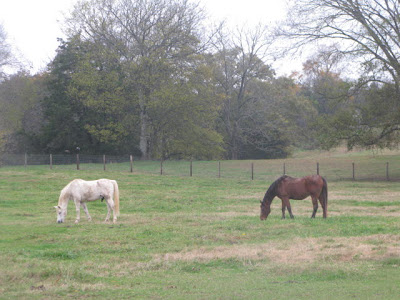 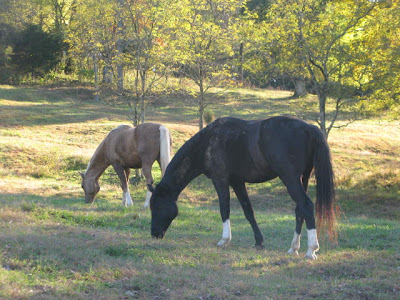 Ivan is a Thoroughbred and retired Grand Prix jumper 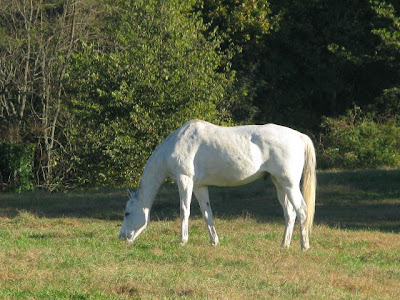 Baby is a Dutch Warmblood/Thoroughbred cross retired from the hunter ring. 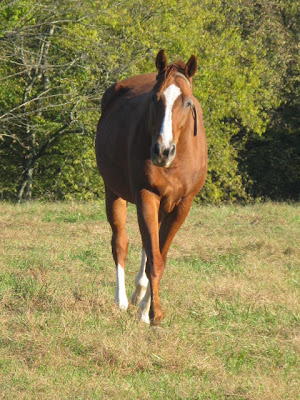 Dustin is a Westphalian and a son of the famous Olympic show jumper Starman. Like his sire Dustin showed in the jumpers. 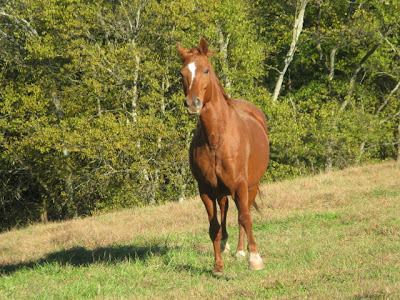 Chance cantering through the pasture 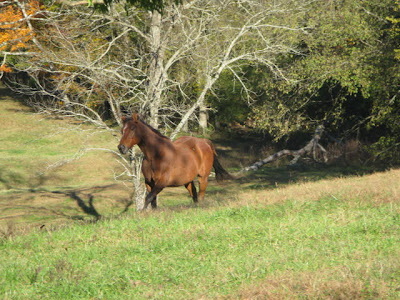 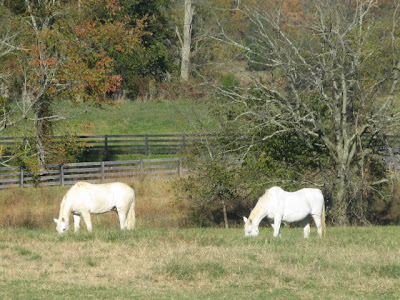 I can't find you on Facebook, what am I doing wrong? I search and it only hooks me up with your website!

Catherine, you are not the first person to say that. I need to sit down and determine how to put a Facebook widget on the blog page that will take you straight to our Facebook page. I will try and do that tonight. It has been a pretty good day today so I guess my tech challenged self is due for a little frustration today!

Got hooked up through your 'widget'- thank you!

Had trouble zipping my half-chaps up over my winter breeches and thought of your similar struggles...ain't winter great?

stilllearning - thanks for the laugh, at least I know I am not alone!