It has been quiet around the farm this week. We never complain about that. About the only thing of interest going on is we are having to change feed. We have fed the same feed for a couple of years, a locally milled complete feed that was very low in NSC's (9%), with good fat, fiber and protein content and a nice vitamin/mineral profile. After a couple of years of scooping out way too many different feeds every day trying to meet each horse's needs, we found this feed a couple of years ago that worked beautifully for all of the horses.

Unfortunately Jason learned that the mill is now making medicated cattle feeds as well. Jason feels it is not worth the risk of purchasing horse feed from a facility that also mills medicated cattle feed and he declared that the load of feed we had would be the last one. Rumensin is deadly to horses and he did not want to take the risk of contamination. Feed mills have various protocols in place to avoid contamination but accidents happen. In fact to the best of his knowledge all of the major nationwide brands have had horses pass away due to a feed problem either in the distant past or recently, and many of the regional brands have as well. The good news is that these incidents have led most major feed manufacturers to revamp their safety protocols to prevent another occurrence. It is not just accidental rumensin contamination that has lead to the deaths of horses, but his feeling is if we can hopefully eliminate that possibility than we would be remiss in not doing so.

We are in the process of switching to a Triple Crown feed (TC Senior). It is slightly higher in NSC's than what we have been feeding at 12% NSC vs the 9% NSC of our old feed . That is still low compared to many other feeds though. For example Safe Choice is something like 22% NSC's (don't quote me on that exact number). It does have a higher fat content than what we had been feeding (10% vs 6%) which we like, and is the same as far as protein and fiber. The vitamin/mineral is comparable as well. I like the fat that the TC soaks and softens a lot faster, when you are soaking feed for over 30 horses every day that makes a difference! We are making the change slowly over a couple of weeks. The feeds are comparable enough that I do not anticipate any issues with the change.

Other than feed adjustments there is not much else going on around here out of the ordinary. As always we hope it stays that way!

I probably won't blog again before the 1st so Happy New Year!! 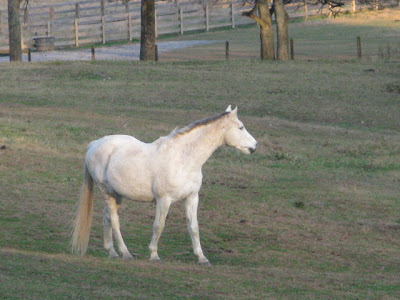 Cuff Links; I think he manages to get cuter every day 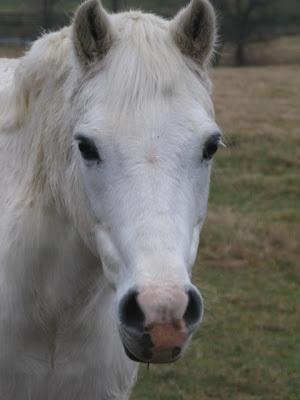 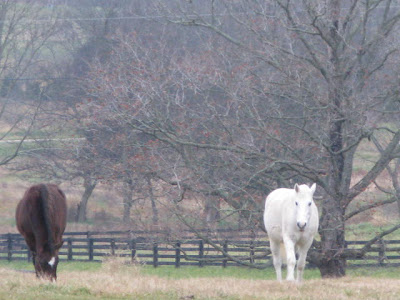 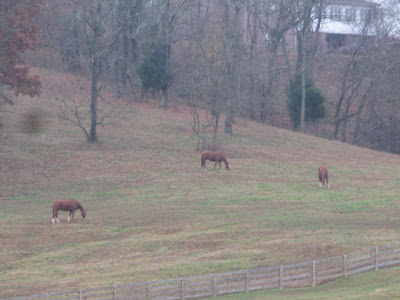 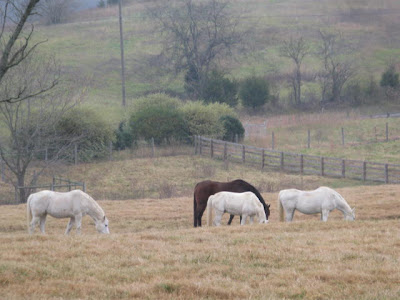 Leo on the run 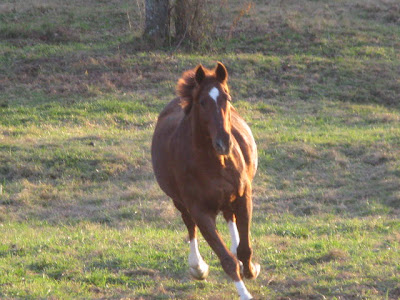 Front to back Chance, Ivan and Leo running through the pasture; the big boys love to play and run. 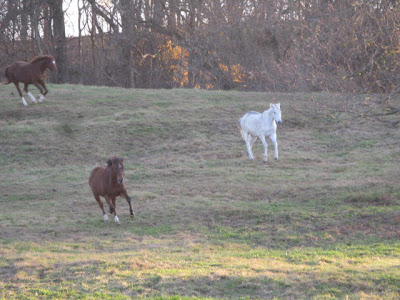 More Boys on the run: Front to back Levendi, Thomas and Elfin 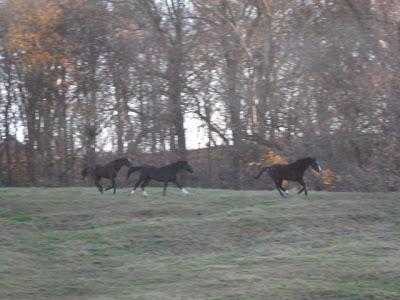 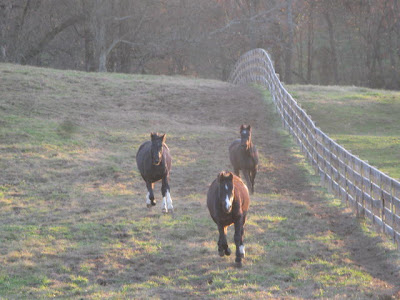 Homer and Tony on the run 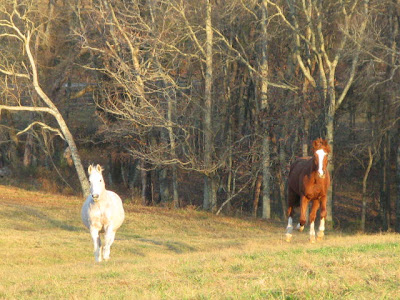 I want to put a caveat in here that nearly *any* improperly formulated feed ingredient has the potential to hurt a horse, whether said ingredient is "toxic" to horses or not.

That said, there have been enough mix-ups at national and regional facilities that blend cattle feeds in the same space as horse feeds that we just aren't willing to take the chance with OUR hard earned reputation, no matter how miniscule that chance may be.

I for one am glad for all the care and attention you give to these matters - my horses and I really appreciate it. Thanks for the Lily pics - she's looking great! Cuffie is a cutie, and looks so relaxed, now. And running horses too - always welcome!

May you and Jason and family, and all the residents, have an excellent New Year!

We have fed Triple Crown Senior before and had no problems with it at all. It smells SO good too! :)

Good for you guys staying informed and making the switch. Cuffie is indeed adorable!

Wow, very interesting...and kinda scary. I wouldn't have known about the issue with cattle feed, even if I did think to check what else the mill was processing. Good thing I don't own a horse, eh?!

Mellisa - another blogger mentioned that when she pulled shoes on her horse the hooves 'crumbled to pieces' so she had the horse shod again. I seem to remember you describing this when you first got Sky and that it was fairly common? I'm just wondering if you had any insight on this issue you'd be willing to share. Not to get in a barefoot discussion, you've discussed that well already, but just to understand your experiences with this particular issue. Just a thought...it's hard not to want to pick your and Jason's brain about, well, everything!

I'm curious why Jason has always said that? That every manufacturer is one load from deadly.

Let's use an analogy with humans and then move into the realm of horses.

Humans (as do all mammals) have a requirement for sodium in our diets. As a consequence, we use appropriate amounts of salt in our cooking and we easily meet our requirements for sodium. However, if we were to eat a pound of salt at one sitting, it would be immediately lethal to us.

It's the same way with horses, cows and nearly every other mammal. If a feed is improperly formulated or improperly mixed (lets say too much of nearly any trace mineral ingredient was added), it can become problematic or lethal for exactly the same reason that salt is lethal to us when we overconsume it.

Most reputable feed mills have a whole bunch of systems in place to prevent this sort of thing from happening (and it is exceedingly rare that it does happen).

I'm not trying to be a fear monger here...it's safe to use commercial feeds on your horses...we do it here and I'm not going to stop !

I LOVE TC Senior. My guys have been on it for 5 years now - they look younger and are more active now than before (and that's saying something -- they're 28 and 22!) I suspect you will be very happy with the feed!