It goes without saying that this has not been a good week. We all miss Trillion a lot, and the days feel wrong from the start without him standing there waiting for me first thing every morning. However life does go on both for the humans and the horses.

To that end there were a couple of relevant comments made in the post about Trillion (all of your kind comments were very much appreciated, they really do give your spirits a lift). One was that this must be one of the worst parts about having a retirement farm. Truer words could not be spoken. As Kate said in her comment, every horse has to leave us at some point. We go through this more than once each year. Many of the retirees here are young and retired due to injury, but of course there is an aging population here as well. When you have a high number of horses in their 20's and early 30's death is inevitable. It is also inevitable with younger horses retired due to injury as quality of life issues usually come into play at some point. To be really frank, it gets worse every time. After the first time you know what to expect and what is coming. You know how hard it will be, and making the decision to euthanize an animal is something that does not come easily to Jason or to me. Feeling like I am playing God is not something that I enjoy.

I experience the same aftermath each time. The sadness, the feeling of loss, reliving your decisions trying to be sure you made the right ones. I can truthfully say I don't think we have ever made the wrong choice when it comes to euthanasia. However the most lingering effect for me is the paranoia. When you are surrounded by a happy, healthy horses every day it is easy to get lulled into a sense of complacency thinking that nothing will change and they will all live forever. Then something happens such as with Trillion to remind me of how fast things can change. Now tiny things send me into an instant panic. For example, this morning when I was feeding one of the groups Snappy wasn't standing at the gate waiting. I think my heart rate immediately shot up to like 180 or something as I thought "Oh my gosh he isn't here, something has happened, I can't deal with this again . . . " I ready myself for a frantic search for Snappy only to realize he is standing behind one of the hay feeders, partially blocked from sight, happily eating hay. It will take awhile for the paranoid, somewhat irrational responses like that to subside.

Someone asked about how the horses handle it and the effect on herd dynamics. For the other horses left behind when one of their herd members passes it is quite painless for them. The herd hierarchy doesn't really change. Trillion was the alpha in his group so everyone simply moved up a spot, no drama at all. One of the mares retired with us, Harmony, originally travelled to us from Canada with another horse, Lacy. Harmony and Lacy had the same owner and these two horses had lived together for something like 15 years. They were VERY bonded to each other. They made the trip from Canada sharing a box stall in the trailer. They had to share a stall together in the barn. Being physically separated from each other was cause for major hysteria. The only way they could come in the barn was to be led in together, and they had to be put in cross ties looking directly at each other or put in the same stall. However when Lacy passed away Harmony never missed a beat. She moved on with her herd and never looked back, we were genuinely shocked at how easy it was for Harmony to move on. It has been two years and Harmony just picked another herd member to become hysterically bonded with. I think that is the advantage of living in a group instead of just with 1 or maybe 2 companions.

I guess the summary of all of that rambling is that it is a lot harder on the humans than the horses when death happens. Well, what a downer of a post. I hope everyone has a nice weekend. I am hoping for extremely quiet and uneventful around here. 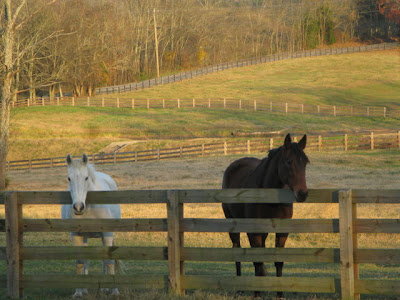 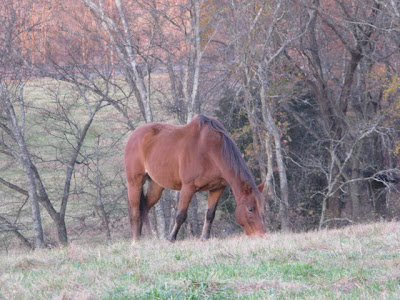 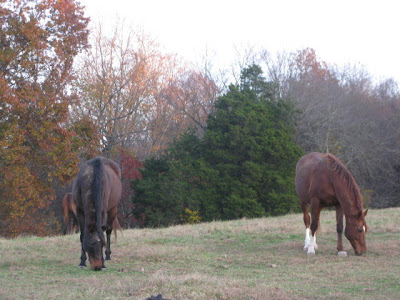 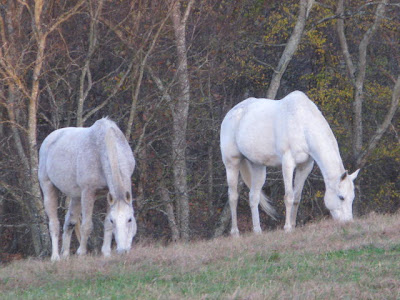 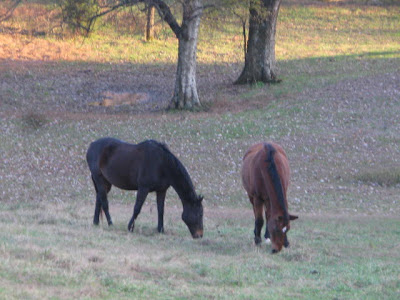 Lucky, Lightening and Clay (Slinky is hiding behind Clay) 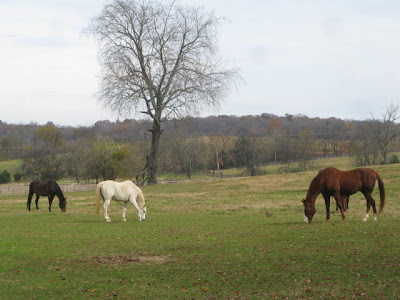 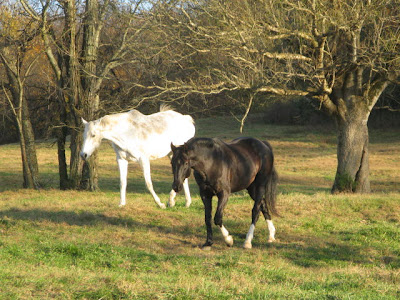 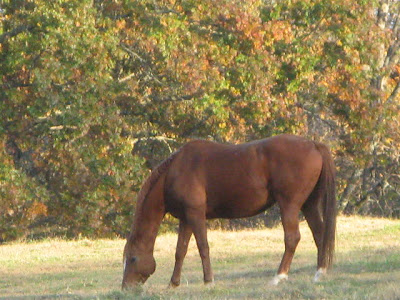 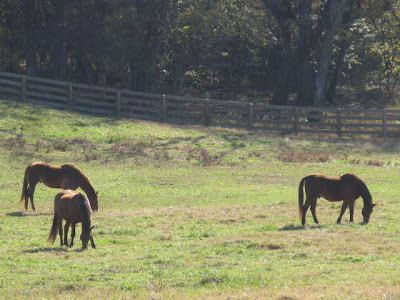 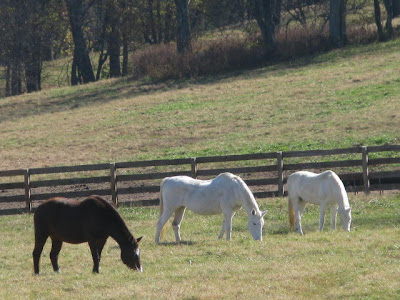 Posted by Melissa-ParadigmFarms at 8:29 PM

Email ThisBlogThis!Share to TwitterShare to FacebookShare to Pinterest
Labels: euthanasia, herd dynamics, What is it really like?

I hope someday I am in a position to send my mare to you for her retirement. The love that you and Jason carry around for your charges is incredible and I think anyone would be crazy to send their horses anywhere that didn't feel the way you guys do. You are so good at taking care of the retirees because you love them all so much. I think they all know it too. I'm sorry for your loss.

I think you're right - the horses take it in stride - but then they're much more matter of fact about most things than people are. And they have their herd business to take care of, too.

I'm just catching up, so sorry. Gosh he reminds me of my Joe! Big ears,bay, star, white hind. Maybe horses understand something about death that we don't, and that's why it's not so traumatic to them. Haveing dealt with it so recently with my mom, there's an odd mixture of sadness but also acceptance that the suffering is ended. It's an amazing thing you and Jason do, giving these horses years of happiness.

I'm so sorry to hear about Trillion. I do agree that it is much harder on us humans than the horses and their herdmates.

I have seen a horse grieve over the loss of a buddy before, but it was in a small group situation -- similiar to what you mentioned -- and without a new companion immediately available. A situation like that is sad to see too -- but like you say -- once a new "buddy" is found, things are usually ok again.

Trillion was a lovely boy (I love the ears! -- my own senior citizen has big ears too)!

I think the best thing you can do is to take comfort in knowing that you were there with him until the end and he had an excellent retirement with wonderful care :)

Ugh, I know those feelings...you articulated what it's like very well. Why is it we can know we're doing the right thing and yet second guess ourselves/feel guilty at the same time?? I hate being responsible for that decision yet I'm grateful for it at the same time. Imagine how much worse it would be if we couldn't do them that last kindness!

I had to euthanize my last dog (at 18+yrs!) and once I got Hazel I was paranoid about every little thing. I must have had 10 fecals run in the first 6 months of her life! I remember crying all the home when she had a UTI at 10 weeks. The vet had made some off-handed comment about her being young to have that problem and maybe she had conformation issues. I thought my strong reactions were because I wasn't really "over" Tia's death but you're right, it's more because I had the experience and could anticipate how much it hurts.

Thanks also for writing about the effect on the horses. I find herd behaviour extremely interesting and really don't know very much.

I don't think it was a "downer" post. It is sad, for sure, but such is life. I think it's healthy to share and honours our lost loved ones that much more.