The weekend could not have had a better start. We greeted a new arrival on Friday evening! he arrived at about 8:15 pm from California. He made the trip from the West Coast to enjoy a first class retirement with us. Since I don't have time to type out a proper introduction with this post I will leave you with a starter picture below.

Our latest arrival to join us for retirement 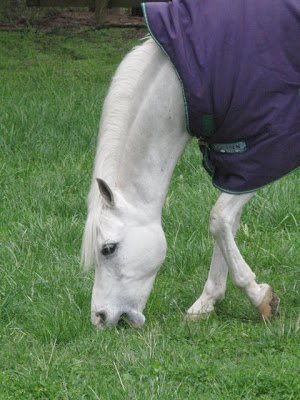 Saturday was another beautiful day, low 70's and sunny. I had a nice ride on Lexi, Jason played with Mina and Jo outside and my dad busied himself mowing the grass up and down the loooong driveway. I must admit I don't understand why he mows since he pays a lawn service but I guess he has his reasons.

I was feeding the horses dinner on Saturday afternoon enjoying the day when I heard a rumble of thunder in the distance. Our weather report kept saying we were supposed to have thunderstorms all day on Saturday but it thankfully didn't work out that way. It did start to sprinkle as I made my way over to the last horses to feed them dinner. While they were taking their time eating it turned into a steady but fairly light rain for about fifteen minutes. I looked up to the sky and saw the most beautiful rainbow over the farm. It was awesome with vibrant colors and the full arch. I had left my camera in the feed shed so I couldn't take a picture right away. By the time I got a picture the rain was gone and the rainbow was also almost gone.
I wish I could have taken this picture about ten minutes earlier. The rainbow was fading away rapidly by the time I got back to where my camera was. 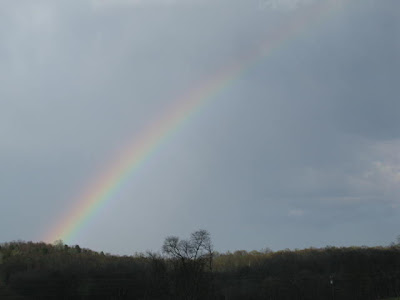 I was a little soggy as I walked back to the house after being caught out in the rain while waiting for the last of the horses to finish eating. I didn't really care about getting wet since I knew I was heading straight inside to take a shower anyway. So instead of complaining about being caught in the the rain I embraced my inner tree hugger and just enjoyed the warm rain as I stood out in it.

As I walked my wet self into the house Jason had the television on. This is notable since we literally go weeks at a time without turning on our tv. I wonder why I bother every month as I pay our Dish Network bill! Apparently there was a line of strong thunderstorms heading our way. Maybe the weather forecasters hadn't been completely wrong after all.

I headed to the shower and as I got out Jason said that the line of storms would hit us any minute. And boy did the hit us a few minutes later. We were pelted with over two inches of rain in less than thirty minutes! At one point it was raining so hard I could barely see the barn, which is next door to my house, out the windows.

The funniest part was right after Jason said the storms would be here any minute we heard a noise and looked out the window. It was my dad driving past on the lawn mower to put it away. He put the lawn mower away and started driving his Gator back to his house (fully loaded with dogs of course) right when the rain hit. So my dad and the dogs drove up the driveway to their house in torrential rain. As I understand it Bugle, who always rides on the passenger seat of the Gator, was not happy.

Then, as quickly as the rain started, it stopped. I don't think I ever heard even a rumble of thunder, just torrential rain. Jason and I went outside to see how things looked. We literally had a river running through our front yard. As we strolled around the farm we saw various low lying areas in the fields with some standing water in them. What shocked both of us was that behind my arena there was a little pond with inches of water. I've never seen that before. The horses in that field thought it was cool. They had plenty of areas that didn't have any standing water in them (as in most of their 23 acre pasture) but where were they? In the new "pond" slapping the water with their front hooves and having a great time.

I was surprised that by this morning basically all of the standing water was gone. The "pond" you see in the pictures below was pretty well completely gone in a few hours. This morning with the exception of the paths where you can obviously see where the water flowed leaving lots of dead leaves and such behind you can't really tell that we had a huge amount of rain in such a short time. I was expecting a muddy, soggy mess for the next few days. I was pleasantly surprised! I guess it helps a lot that the grass is growing now and taking up a lot of the water. The only reminder of the rain was the much cooler temperatures that came behind it a few hours later. Our high was only 50 today. Thankfully we're back to more pleasant temperatures tomorrow! 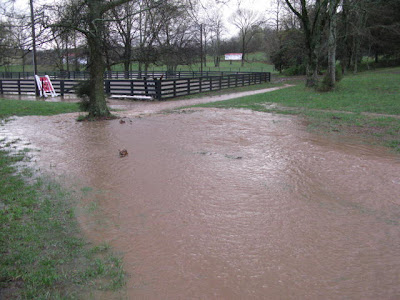 The horses couldn't resist playing in the water 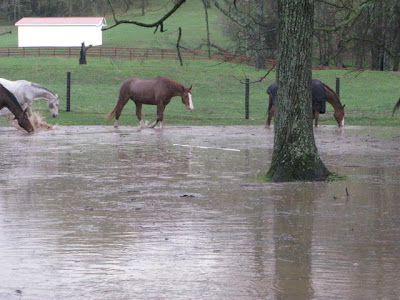 Amazingly all of this water was gone in a few hours; you can't even tell today that we had these "rivers" and "ponds" 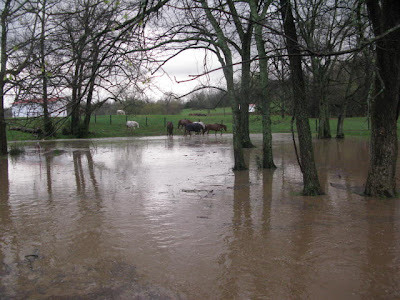 Posted by Melissa-ParadigmFarms at 10:07 PM

WOW, you weren't kidding when you said it was like a little pond! We actually did not have any storms, just lots of steady rain. Im glad to see the sunshine back and hopefully warmer temps.

The new resident is adorable! I can't wait to read more about him.

Our new Friesian colt will be arriving in the next couple weeks. Hoffy is going to be a wonderful uncle.:)

My goodness, I thought we had a lot of rain....the horses got a good bath! Thanks so much for visiting!

Love the water play! The new resident is very cute - a pony?

I love the rain.

holycrap that water. what odd weather you have. warm rain, and so much!

anyway, do you know your hay types? i find it interesting that after 20 years with a horse, i still had to go online to find out what kind of hay i bought last night (cuz here in germany it's called "normal hay" ..uhhh...really?? yes, two hay farmers told me that so far. "normal field hay" pppfffft.).

i posted a pic of the seedheads in my blog, but so far no one seems to know their hays either. odd!

also, i brought the hay guy to our field yesterday, and asked him if he'd like to mow hay. we have simply too much, and why not make hay if you can? he said YES! now i'm totally curious about how this hay making process goes, can't wait to learn it! (through observation, not by DOING it - i have no tractor.)

moles, we apologize, but your hilly construction efforts will be disturbed shortly...

~lytha, 7 hours from bringing her horse home after a 21 year wait

wow! How crazy is 2 inches in 30 minutes? That's funny about the horses playing in it. My mare is too silly for that. She does everything in her power to walk around or jump over water spots or anything she thinks might be a pit. goofy girl