The people on the farm worked very hard this weekend. On the other hand the horses mostly seemed to be lounging around while watching our frenzy of activity. Jason pretty much lived on the tractor Friday through Sunday. I think it would be appropriate to say that his back is killing him! He fertilized, did weed control, re-seeded with grass seed, and harrowed everywhere again. He basically covered the farm four times in three days.

Jason on the tractor 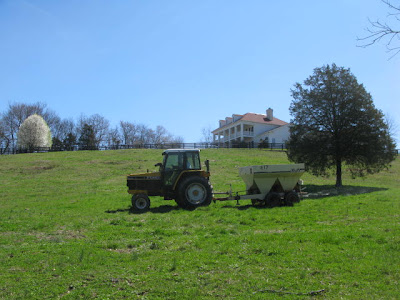 I was of course opening and closing gates and doing all of the regular daily farm things. I think I could walk around and open and close gates without opening my eyes today. The horses apparently found none of this of particular interest and I had ample opportunity to take pictures of horses napping and rolling.

We hardly took a break and Jason and I shared a very romantic lunch sitting on the tailgate of the Kubota utility vehicle out in one of the pastures. He had a brief reprieve from the cab of the tractor for a few minutes to eat lunch.

Finally on Sunday afternoon Jason finished his last pass on the pastures with the tractor. We were congratulating ourselves (mostly Jason really) for accomplishing an amazing amount of work over three days. All that was left to do was unhook the last piece of equipment and put away the tractor. We would be done in ten minutes - YAY!!! But then the pin wouldn't come out of the hitch. No problem, we'll just grab a hammer and give it a tap and it will pop right out.

Well it didn't. So Jason went and got the sledge hammer. We pounded on this pin from the bottom. It didn't move. It didn't move because it was bent, which sometimes happens as you pull equipment across a farm. Do you have any idea how awkward it is to swing a 16 pound sledge hammer UP and not down?? I do. We moved on to trying some big crow barns wedged under the top of the pin while pounding with the sledge hammer. We tried putting a jack under the pin and just forcing it up and out with the jack. All we did was lift the tractor up!

Three different sized pry bars, the sledge hammer, the jack . . . none of it was successful in getting the bent pin out 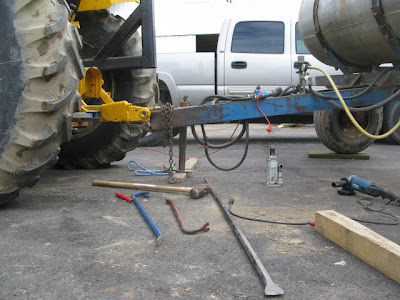 After almost an HOUR Jason couldn't take it any more and we weren't getting this bent pin out. So Jason went in the workshop and came back with a grinder. He said he was going to force it to be a cutting tool and cut this iron pin in half. It wasn't pretty and that poor grinder was smoking and sparks were flying everywhere. He finally managed to cut the pin in half, we popped out both ends and at last we were done.

Sparks starting to fly as Jason ran out of patience and just cut the pin in half. My camera battery died as I took this picture. The wall of sparks ended up being well above Jason's head before his mission was accomplished! 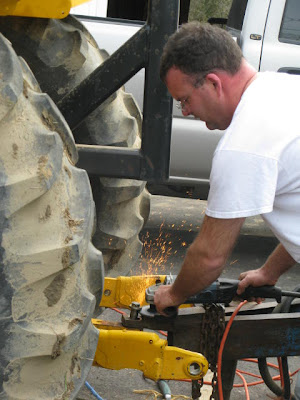 Unfortunately for Jason the torture didn't end though. I had gotten us tickets to see the Vienna Boys Choir at the Schermerhorn Symphony Center in Nashville on Sunday evening. He was unable to come up with some kind of witness relocation program or to fake illness so he had to go. He didn't enjoy most of the first half where they sang classical music only and sang in all foreign languages, a lot of it in Latin. He really enjoyed the second half though when they performed some classic Austrian songs including some with yodeling, polka dances and other fun things as well as other pieces from around the world. I guess I will be expected to sit through a performance of the Grand Ole Opry as payback. Ugh.

Every day new signs of spring; this tree is close to leafing out 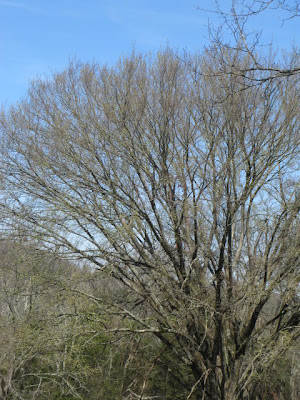 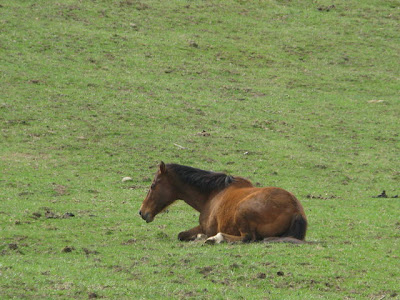 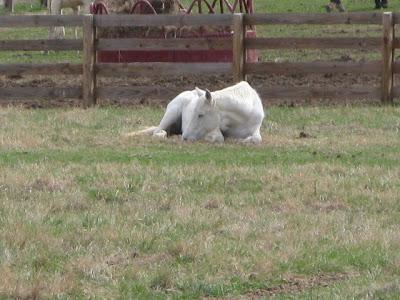 Harmony then moved on into full sleep/dead horse position 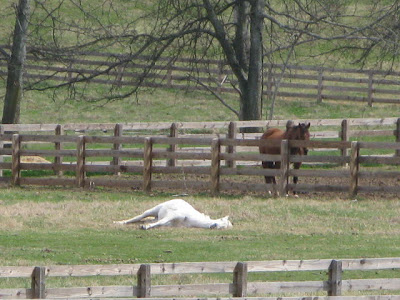 Ogie napping with Henry behind him 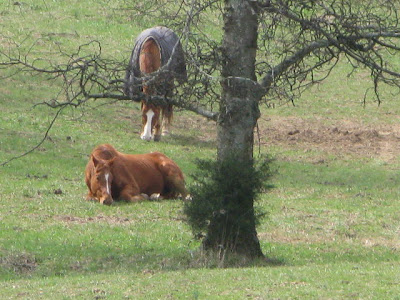 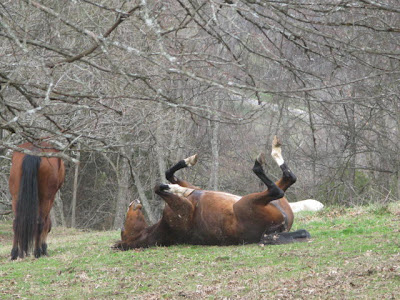 Posted by Melissa-ParadigmFarms at 7:39 AM

Sounds like a tough weekend with farm equipment! At least the horses were still enjoying their retirement, as they should. Thanks for the pics!

I'll grudgingly admit that the second half of the Vienna Boys Choir performance was very good, although I don't know that it ever would have occurred to me to spend a couple hundred bucks on tickets and dinner at the venue without some serious prompting from Melissa.

Getting all the tractor work done in a timely and efficient manner put me in a really good mood. Every spring, nature gives you a window in which to accomplish the work necessary to really make a piece of ground thrive. When you listen carefully and work in concert with what you are hearing from the cosmos, in it's own way farming is exactly like conducting a symphony (and puts a smile on my face a whole lot more readily to boot ! )

Way to go Jason! It feels wonderful when you get big things done, like a big wave of relief just washes over everything. It's awesome.

Thanks for visiting my kitchen and the encouraging words...I'm still debating on whether I want to tackle this painting job or not....regardless..I will paint some type of equestrian mural above our computer desk. I remember my dad being frustrated with the little things that happen on the farm....especially at the end of a good productive day. Jason, love the analogy of conducting a "farming" symphony, well said!

Don't ya just hate that? Almost done and bam, always something. At least it got figured out and everything is done.