Just as it did a few weekends ago this weekend got off to an auspicious start. On Friday morning my horse Lexi decided to put herself in the running for a Darwin award. Not five minutes after Amy and I had left her pasture after feeding and putting on rainsheets my Dad calls me to say there is a horse tangled up in the fence and to come fast. He also said to bring my chainsaw. GULP. OK, I don't know what else he could have said to make me panic because that certainly did! I ran to the barn, grabbing my chainsaw and other tools and jumped in the trusty Kubota and drove that poor utility vehicle faster than I ever thought possible! In the couple of minutes I had to think about what was happening you can imagine all of the horrible scenes that were going through my mind.


As I skidded to a stop in the Kubota and was assessing the scene my first thought was "this is really bad." I could see it was Lexi and she was very much trapped underneath the fence. As I walked up and started examining things I realized that the situation was not as dire as I thought. I could see no signs of a struggle and Lexi was laying there quietly waiting for someone to help her. Her mom, Bridget, was standing over her and looked so relieved to see me.


Clearly Lexi had gone down to roll, and when she went to flop to the other side she got all four legs underneath the fence. She also put herself on just enough of a downward incline that she could not scoot herself back. Plus it had rained overnight and she couldn't get any traction. She also complicated things by also now having her head underneath the fence. Her piece de resistance was that she had a fence post between her front and back legs. Great.


It would be impossible to flip her over so she could get out and dismantling the fence was the only option. My dad manned my much-maligned chainsaw while I covered Lexi's eyes to keep debris from the sawing getting in them. To her great credit she just laid there quietly with the saw buzzing away inches from her head. I honestly thought I would be racing back to the barn in the Kubota to get some tranquilizer for her once we started using the saw so close to her head. However she could not have been any more cooperative. First we removed the bottom board from above her front legs and her head but she still didn't have enough room to maneuver. So we ended up removing all four boards and completely tearing down that section of the fence.


She still wouldn't get up and it looked like we were going to have to completely dismantle the other section of the fence and remove the post. Just as we went to start doing that she suddenly decided to try and get up. She popped up, shook (I guess to finally complete the rolling experience) and then ran off to rejoin her buddies without even saying thanks. We had shooed the other horses away so there wouldn't be anyone trying to escape after we tore down the fence.

With perfect timing Jason drove up then so he got the job of rebuilding the fence. I had called Jason and told him to come home NOW after dad had called me and before I actually knew what the problem was. At least I didn't have to rebuild the fence myself. As Jason was very grumpily rebuilding the fence I pointed out that this could have ended with a huge vet bill and that we were really lucky. Of course he pointed out that if Lexi wasn't so stupid as to roll right next to the fence vs. the 20 open acres of pasture she lived in the whole thing could have been avoided. I did remind him that Lexi was not the first horse to roll right next to the wood fence and do this, and unfortunately I'm sure she won't be the last. Why do horses have to roll right by the fence, especially the horses on this farm who all live in huge pastures???


Amazingly Lexi does not even have a scratch on her and is none the worse for her experience. I can't say that I am none the worse for the experience as I had even more years removed from my life. I have decided that the horses on this farm are all in a conspiracy against me and are determined to see just how many years they can shorten my life span!


Other than that the weekend was pretty quiet, thank goodness. Jason and I are continuing to get to know Mina and Jo, the adorable fainting goats. They were very shy at first but are starting to warm up. They will now eat of my hand and let me pet them while they are eating. I still can't just walk up to them and pet them though. Any goat whisperers who happen to be reading feel free to give some suggestions for making friends with goats in the comments.


We got a little bit of snow overnight Saturday night, our second snowfall of the winter. We only had maybe an inch of accumulation that had largely melted by Sunday afternoon. As I understand it lots of other areas received a lot more accumulation than one inch so we were pretty disappointed! Like all good southerners and transplanted Canadians we look forward to playing in the snow a couple of times a year. At least the weekend ended a lot quieter than it started!


Trillion, Faune, Asterik and Henry in the snow 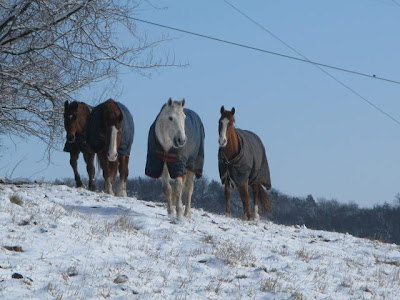 O'Reilly, Bridget and Lexi (without a scratch on her!) in the snow 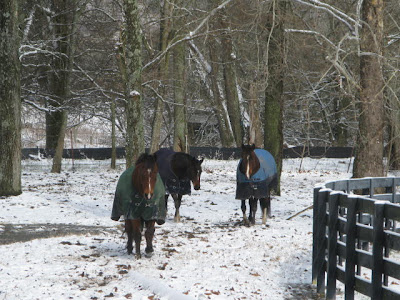 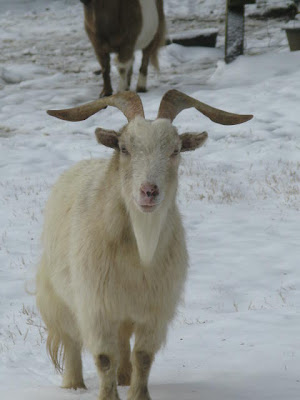 One of the roosters (one of our three remaining chickens) 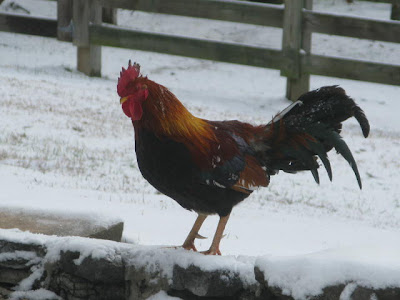 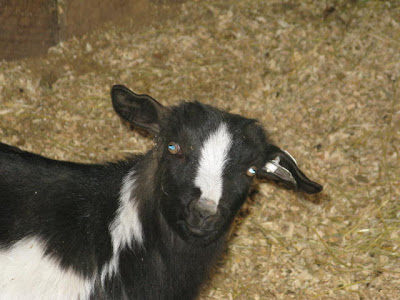 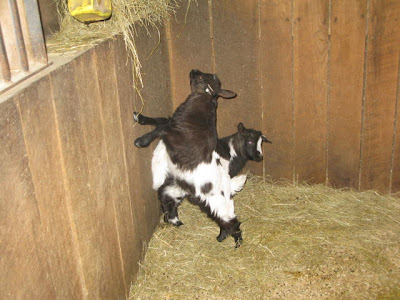 Jo giving me a kiss on the nose 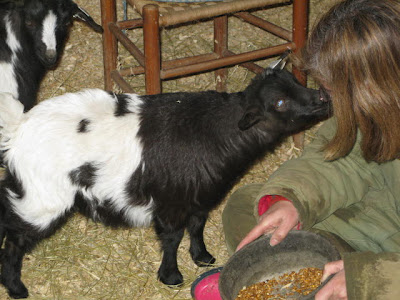 Posted by Melissa-ParadigmFarms at 7:50 PM

Great photos! I can feel for you girl with Lexi getting stuck. I have an older post (2nd page I think) similar to yours when my 700 lb. weanling got cast against the wall and no one was around to help me turn him. By the grace of God, I got him up and over, boy was I sore the next day! He was in a huge stall. We did imprinting when he was born and I attribute it to him not panicking while I tried my best several times to turn him. He was colicking and I had a two year old that died four years ago in the same stall....talk about a nightmare flashback....hers went bad fast as we heard banging in the middle of the night. Glad everything went well for you! Yes, these animals can age you but I always say they also add years to your life with the joy they bring to us so it evens out in the end!

Im glad Lexi is ok! I know how scared you must have been to get that call from your dad.

Great pictures! Those goats are too cute.

I am posting some pictures of the horses playing in the snow today. There is a really cute one of Hoffy sticking his tongue out for the camera.:)

I think you are doing just fine with your new goats. A little time and loving effort and they will be like your new best friends :)

And my horse is right there too doing the dumbest things. If there's something to get hurt on, she WILL find it. Thankfully it's never been anything serious enough to rack up a large vet bill (knocking on wood). Good for you for looking on the positive side of it instead of getting mad :)) Crazy creatures.

Here are a few goatie tips for you.

#1 Most goats LOVE raisins. If you want to use them as a treat every so often they are a great motivator.

#2 Goats are very picky eaters. The old sayings about goats could not be any more wrong.

#3 Goats are highly intelligent (hence all the trouble they tend to cause) and tend to be little escape artists.

#4 Baking soda and goat minerals should be available for them AT ALL TIMES. Minerals are not only good for their health, the salt in them promotes drinking. Baking soda helps with upset tummies.

#5 Probiotics are GREAT for upset tummies. Probios makes it in powder and paste form. The powder should be given in their grain every day (dosage is on the bottle) and the paste should be given orally every time they don't eat.

Sport's Mom, Mina and Jo will let us pet them all day as long as we are feeding them. If food is not involved they are still skittish about us just walking up to them wo we can pet them. Any suggestions for making friends?

We sit in the stall with them and hand feed them 3-4x/day and they are clearly very comfortable with that now. I'd like to move to the next level where we can just walk up to them and give pets and hugs without them being nervous. Aside from giving it more time and keeping up what we are doing do you have any other suggestions for becoming BFF with goats?

You're doing the right thing already. Just be patient. Goats are slow to trust people if they are dam raised which I'm guessing Mina and Jo were. Sometimes it's good to just go in the stall and ignore them. Sit down in the corner and read a book and don't even look at them unless they come up to you and when they DO come up give them raisins and lots of pets and scratches. After a few days you will be BFFs! :)