The morning started off in a very typical fashion this morning. I did the barn chores and fed the first couple of pastures and it was just a typical morning on the retirement farm. As I was walking through one of the pastures to continue feeding breakfast I noticed the horses in the field and the other fields I could see were on high alert. Like seriously high alert. I saw a lot of horses standing like statues with heads raised, ears pricked, and tails flagged. Then they would prance around for a minute before striking the pose again. 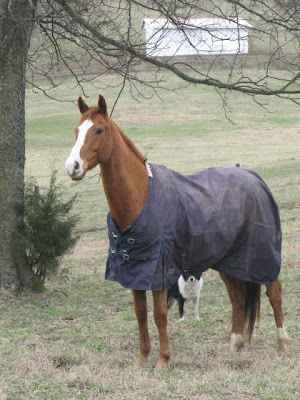 I could not figure out what had their attention. Then I heard all sorts of screaming and yelling coming from the old farm house. There is an old house in one of the cattle pastures on the property that was in a serious state of disrepair when my parents bought the land many years ago. Its state has not improved over time! I pulled my cell phone out of my pocket to call my parents' house and ask them if they new what in the world was going on and if not that we had a big problem. Then I happened to glance down towards the road and caught site of a police squad car and a van parked in one of the farm entrances.

Not an everyday site to see this parked in your driveway 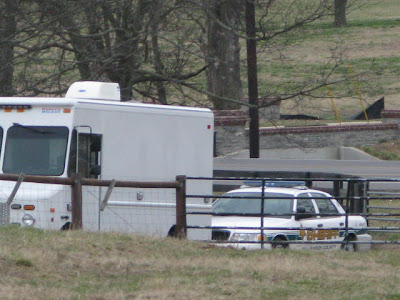 Just as I noticed the squad car and the van then I saw a bunch of guys in full SWAT gear coming out of the house. I returned my cell phone to my pocket as I knew what was going on at that point. The SWAT team was practicing hostage rescue, high risk entrances, and all of the other dangerous and scary things that SWAT teams do. My dad founded and chairs a law enforcement non-profit foundation to support the local law enforcement agencies and a couple of times a year the SWAT team practices out at the farm. Jason and I have even been "hostages" and been rescued. In past practices our barn has been stormed by team members, the entire farm has been staked out, and the old house is used as well. They can storm around in the old house and not have to worry about breaking things, getting anything dirty, etc.

Trust me, even when they are just practicing you truly understand that you don't want to mess with these guys! The horses seemed to pick up on that and were riveted by the sounds and the occasional sites of the team in their gear. The horses certainly never find me that interesting - I hardly warrant a casual lift of the head. 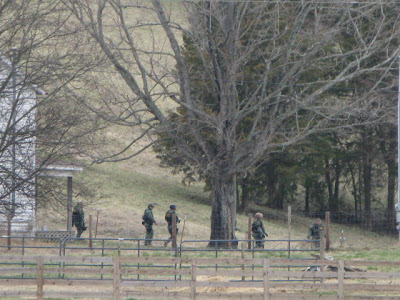 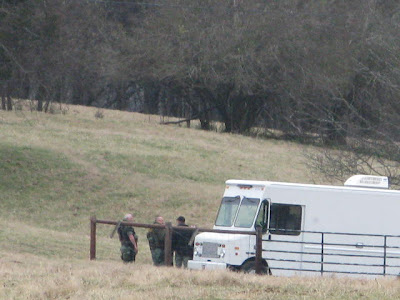 My only complaint was that it would be nice if someone would bother to mention to me that the SWAT team was going to be out practicing. It is a bit startling for a second or two when you hear screaming, yelling, and gunfire before you put two and two together and realize what is going on!

Bush staring at the house wondering why there are so many people in there yelling. He wasn't brave enough to actually go over there and found out what was going on! 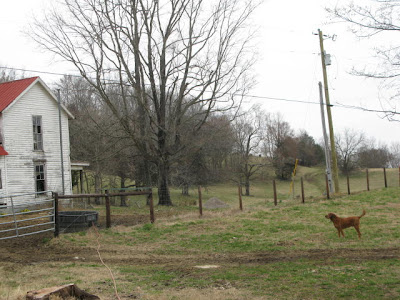 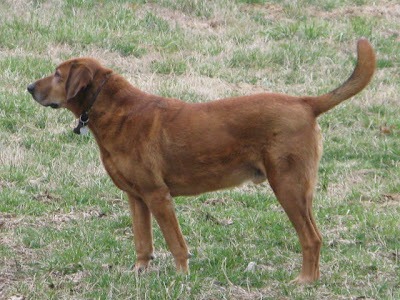 It took forever for me to finish feeding everyone. Usually once they have their feedbags on they just put their heads down and eat quietly. But not today. They would put their heads down and take a bite and then the head went back up and they stared at the old house. Whenever the guys would emerge from the house that really fascinated them, even more than any of the noises. They would even stop chewing and just stare at them so intently. I guess it isn't everyday that they see guys dressed up in camo, face shields and body armour so I can see why they were so interested in the activities!

This was why it took forever for everyone to eat! Tony was doing the statue thing in this picture and not even chewing. 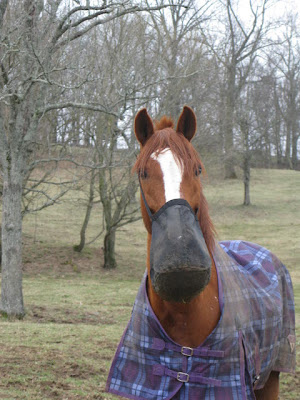 Just as I finally finished feeding everyone the team packed up all of their stuff and left. The horses seemed a little bit disappointed that the action had ended. They went back to grazing and eating hay, but I would see them lifting their heads hopefully and staring at the house as if they were willing the excitement to come back.


I'm sure the horses feel safer knowing they are "in" with the local law enforcement. Instead of going to horse shows or hitting the trails we entertain the horses with things like SWAT team practices. Instead of taking them to the action we bring the action to them. Just another day on the retirement farm!

Buffy was one of the horses most fascinated by the action. I don't think she ever stopped watching. 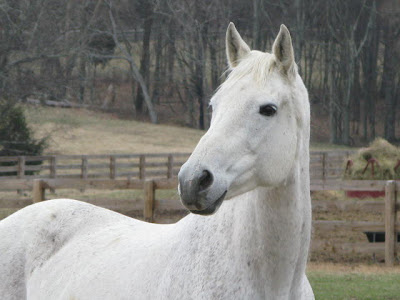 Levendi wondering what the heck is going on 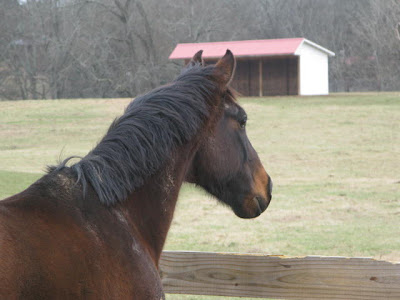 Buffy and Teddy staring at the house 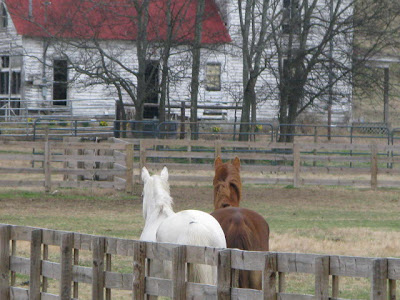 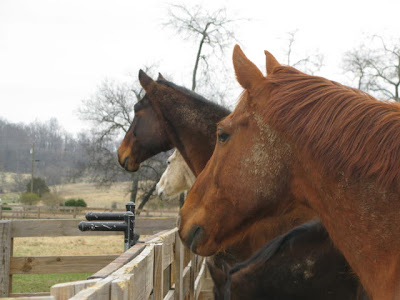 This picture has nothing to do with this post. The daffodils bloomed last week and I happened to take a picture of them today. These are by the old farm house. Spring is in the air! 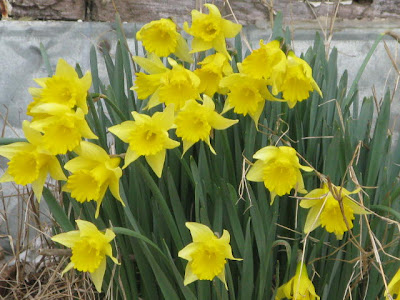 Posted by Melissa-ParadigmFarms at 10:01 PM

Daffodils! sigh . . . we're weeks away from that yet. Nice photos of "horses on alert"!

That's too funny the way horses just stand frozen. Great post! I enjoyed it! We have coyotes that pass through our farm at night and our horses do that in their stalls. In the day time....deer cross over the property and they stand looking, other than that, we have no excitement to speak of like that! Oh yes, and an occasional hackney horse with rider goes by on the road...they love him! Oh no Daffodils here yet!

Tony with his feed bag is hilarious. I love how the horses look on alert.

That old house is a good size one. Too bad it was left to ruin so many years ago.

I think I might have had a mild heart attack. I would've been on the phone to the police saying that there were people on my property with the dispatcher going, "Um, ma'am? Those ARE the police on your property."

I second Sully - love Tony and his feed bag!

Melissa - I've stumbled across your blog a few months ago and am *addicted* - I'll confess that I check almost daily for new posts. I wish that all retirees could live in the lap of luxury like yours do!

You snapped some fabulous photos of the horses watching the SWAT team. I lost my 35-yr-old in January but he would have done exactly the same thing - snorting, blowing, prancing, spinning. Comical and gorgeous at the same time.

And I love the daffodils; I think Spring must be just around the corner. Fingers crossed! Thanks again for the wonderful post.

Kate - yes, spring is officially here with the daffodils. Not to mention the awesome weather! I will freely admit I am a hothouse flower of the south. I just don't do well in cold weather. I know some people love it but I'm not one of them!

BET, I am 100% certain that a hackney horse going by would be of serious interest to the horses. We have enough deer that cross the farm that I don't know if they would be of interest anymore (unless of course they were being ridden, then of course it would be cause for fireworks!).

Sully, the house looked horrible when my parents bought the property about 17 years ago. the inside is just trashed. My dad did replace part of the roof thinking they might restore it one day but it is a huge project that none of us really have time for.

Meghan, your comment made me laugh! I told one of the Amy's that helps us today about the excitement she missed yesterday. She said she would have just had a heart attack and died in the pasture when she suddenly heard the screaming and the gunfire!

Kathleen, thank you for your very kind comments on my blog. I really appreciate it and it encourages me to keep blogging. It is always nice to know that someone actually enjoys reading what you write!

There was a very similar situation that just happened on our farm yesterday. The horses were all excited and were staring into the woods across our creek into another field at some mysterious monster.

The monsters turned out to be 7 of our heifers that got out due to a downed limb on the fence from our recent snow storm! It is so funny that the horses are never even worried about the cows, until they are out of their place.:) It was quite an event around here getting them back in!

I have been working on painting, flooring, etc for 4 months straight on a few different houses. It is so time consuming and tiresome.

I did not think your parents let the house go to ruin like that. They seem to be very smart with money. :)