We had a big event today! Jason received his U.S. Citizenship today and we attended his citizenship ceremony. For those of you who don't already know this Jason is a Canadian citizen, but as of today he is a citizen of most of North America. Lucky guy! We celebrated by coming home and putting Mina and Jo out in their paddock to play and graze for a couple of hours. We were laughing that his first official act as a U.S. Citizen was taking his goats outside to play! Bear is also a citizen of most of North America since he was actually born in Ontario as well before moving to Tennessee at the tender age of six weeks. So I now live with a husband and a dog with dual citizenships. I feel left out!

We will have another busy Friday on the retirement farm tomorrow. Our wonderful farrier Gwen will be here for several hours tomorrow. We also have a new resident arriving for retirement tomorrow as well. And of course we will continue to work away with shedding tools in hand on all of the horses. It rained yesterday and last night and there is nothing like a good rain to help loosen up a lot of hair! I was yet again covered in horse hair and dirt this afternoon as I used my repertoire of shedding tools on several horses. The hair was just coming off of them in sheets after the rain. A few more weeks of eating horse hair and we'll have everyone sporting their slick summer coats. Some of the horses are almost there while others still look like hairy yaks in spite of the fact that we've curried them within an inch of their lives!

Now on to some pictures. These pictures were all taken in late November and early December. It is a lot easier to look at these pictures of horses in blankets and dormant grass when the temperatures are back in the 70's and the grass is green and growing again!

Gwen working away on Faune while Sparky watches and waits for his turn. Sparky adores Gwen, she is one of his most favorite people on the planet. 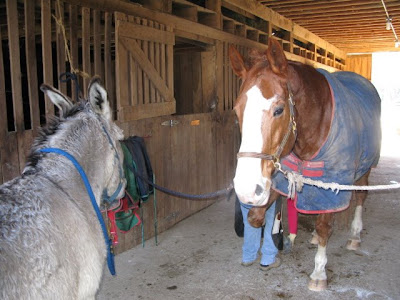 Sparky and Faune then moved in for a kiss 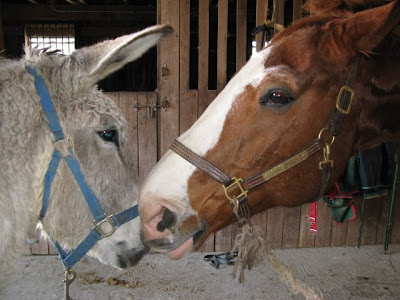 Trillion doing his dead horse imitation (I thought it was real one time) while Sebastian naps along with him. Asterik is standing watch behind them. 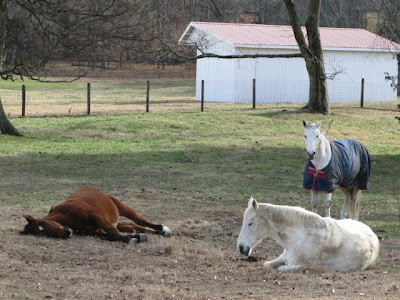 From back to front: Elfin, Leo, Ivan, Chance, Tony 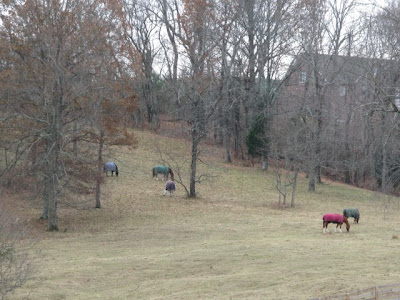 Ogie and Asterik enjoying a nap together 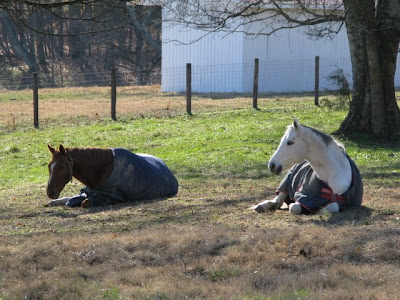 Levendi napping; napping seems to have been a theme during the time frame in which I took these pictures! 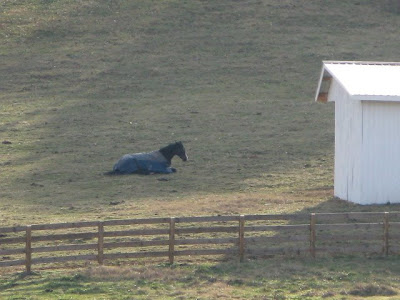 Poco with his mane going everywhere. I remember taking this picture because we were having our own version of a "mexican standoff." He had to have Liver Kl'een every morning for five months and it was a rodeo every day to accomplish that task. 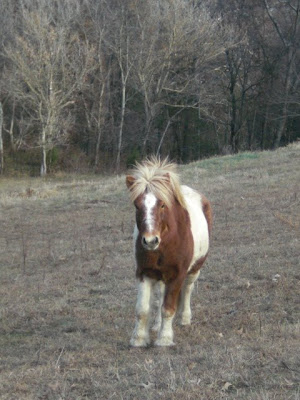 "What does a horse have to do in order to get breakfast around here????" L-R Trillion, Sebastian, Asterik, Faune, Ogie 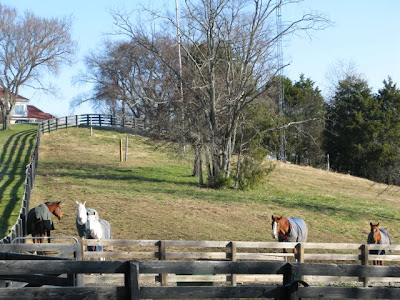 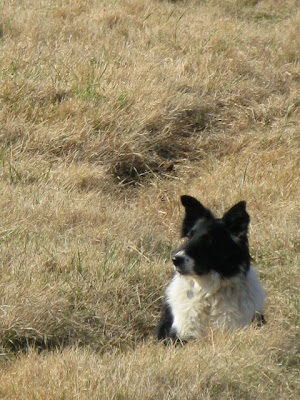 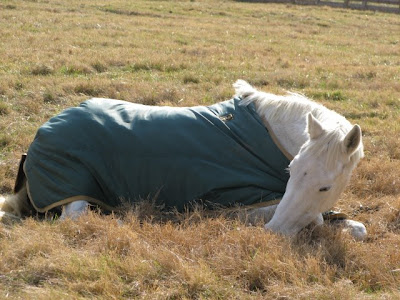 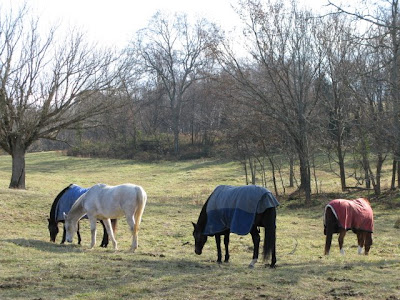 Ivan looking over the fence 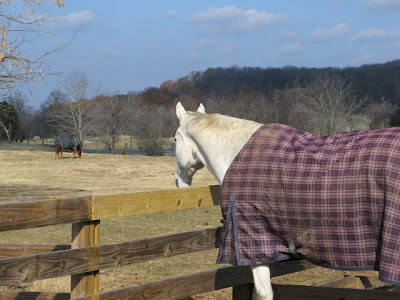 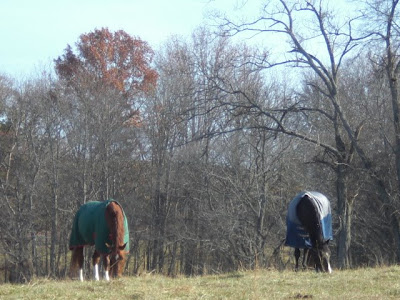 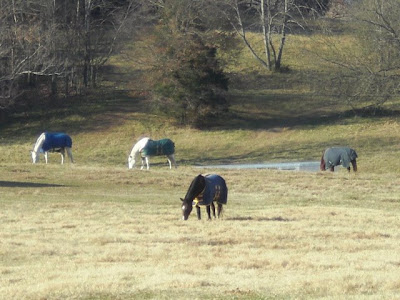 Posted by Melissa-ParadigmFarms at 9:40 PM

Congratulations, Jason - that's a big day for sure!

Thanks for all the great pictures - the pony and donkey are the cutest!

I'll bet you're so glad to have Jason as a citizen. Your photos are fantastic showing the life there on your wonderful farm! Congrats! Luanne

I have a question for you and your husband.

I am bringing my horse home finally, after 20+ years of boarding. Exciting!

Since I'm in Germany and it's impossible to buy a really good high fat, high fiber senior feed, I've decided to make my own. Yes, my husband handed me the credit card at the feedstore today while I rattled off the list of Lytha's Equine Senior (or, Baasha's 'Please-Gain' Formula).

Beet pulp, grass pellets, and corn. Served with 200 grams veg. oil (alongside the allyoucaneat hay buffet and pasture). (They didn't have luzern pellets (alfalfa) so I stuck with the grass, which Baasha is getting twice daily now at his barn.)

When I got home I realized the man had sold me whole corn, not crushed. I did a little Internet research and found that it may be a problem for horses to chew properly. My horse has pretty good teeth for his age, and regular dental visits. Is whole corn a problem? If they don't chew it up, I read, like whole oats, they pass through undigested. Have you ever feed whole corn to your senior horses?

I wanted to also ping your husband again, he seems to like silage/haylage, but is it really supposed to smell like that? Our horse insurance man was here last night (in Germany, all horses must be insured) and he said we should feed silage, that is, if we don't have any mice that might chew through the shrink wrapping and cause deadly botulisum. (!!!) That just sounds too high risk for me. What does Jason (Ami Citizen!) say?

Let's see if the new Yank can answer your questions !

1. Whole corn MAY pass through the gut wholly undigested, but this would be unlikely as it spends upwards of 24 hours in some form of digestion. I would go ahead and feed a little bit and check the results out the other end if you know what I mean. Check the manure, pick out some kernels and sqeeze them to see what comes out. If the kernels are full of hard,starchy white material it didn't digest very well. If there is a little bit of soft starchy material, it DID digest well, and the only thing you are really picking out is the corn seed coat or endosperm...no nutrition there anyway. The flipside to this argument is that whole corn definitely digests more slowly than cracked corn which may add a measure of safety to your feed as starch levels in whole corn, while similar to cracked corn, are a WHOLE BUNCH less easily available. If you think about that for a minute, I believe it'll make sense.

WRT to haylage, yes, if it is put up properly I think it makes great feed, especially in areas (like Germany) with cool, wet summers where making dry hay would be difficult or impossible.

Really, you need to look at the actual risks associated with both practices. When you do, I believe you'll find that just as many horses perish from molds, mycotoxins and contaminants from poorly made dry(ish) hay than do from poorly made and stored haylage or silage. You can check on haylage quality quite easily by doing a quick pH test on it. Just get a test kit at your local farm supply store. Generally speaking, pH much about 4.2 = poor fermentation and increased risks for molds and mycotoxins. Lower pH (under 4.2) = low risk for molds and mycotoxins.

And about the smell...yes, it probably should smell like that. Haylage = pickled grass. You'll learn very quickly the difference between sweet smelling haylage and that which is not so sweet, another sign of poor fermentation once you know what to look for (think burnt looking and caramelish odor).

Thanks for your time and detail in answering my questions. I read your answer to my non-horsey husband, trying to solicit a chuckle about the poop squeezing process. (He's on the phone as I type this, trying to get us fencing materials. Oh how my horse habit has infringed on his life (and wallet) lately!)

So if you guys are ever in Germany, you are cordially invited to come visit us, enjoy some chocolate and coffee/beer, and sniff the neighbor's silage and tell me if it's sweet or sour. I honestly cannot tell: ) *giggle*

I understand that regular hay can contain blister beetles, poisonous weeds, and mold. Interesting that a PH test will determine the safety of Silage. I would definitely have one if I decided to feed it. I admit, German horses love that stuff. Those crazy bread-eating German horses!

Thanks again, and thanks for the educational blog, it's especially relevant to me cuz we just got our first farm.

I promise we'll take you up on both offers if we are ever within stopping distance of your place near Cologne ! :)

This messed up Yankee/Canuck NEVER misses an opportunity for free food and drink combined with good conversation. :)

LOVE the picture of Poco. Im so glad he is doing better now. Did you guys have rough storms this weekend?

I love that picture of Poco and his wild hair. Too cute.