I just edited my post as I learned some vital information a minute ago - April 1st is Cuffie's birthday. HAPPY BIRTHDAY CUFFIE - your present is joining us for retirement!!!

As I mentioned in my last post we recently had a new arrival join us for retirement. Cuff Links joined us this past Friday after travelling from California, delivered by Hubbard Horse Transportation. Every retiree we have here from the west coast has travelled to us via Hubbard and we've yet to have anything but a good experience. "Cuffie" walked off the trailer alert and happy and immediately drug me over to the grass and started grazing. That has pretty much been his main desire since arrival, he is a lawn mower extraordinaire!

Does it get any cuter than this?? 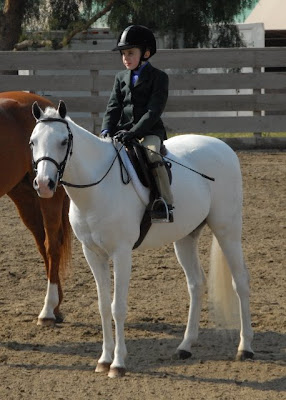 I keep telling Cuffie that he will like us a lot better in a couple of weeks. Although he is used to several hours of turnout each day he did not have access to any grass at his last boarding facility. Much to Cuffie's chagrin we only allowed him 10 minutes of grazing Friday evening, 10 minutes on Saturday, and then we have added 10 minutes each day since then. Today Cuffie got to graze for 40 whole minutes and I don't think he lifted his head the entire time! He does get out for a couple of hand walks every day and some extra turnout time in my arena, but he has made it clear that since grazing is now an option in his life again it is the only turnout time that really counts!

Cuffie in his favorite position - head down and grazing; he came to the right place for that! 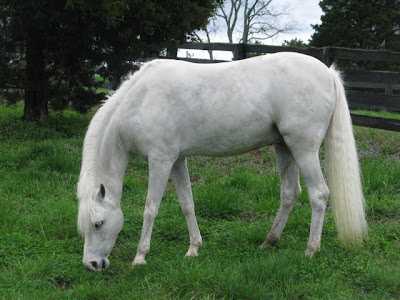 Cuffie looking around at his new digs; he seems pretty pleased with them so far. 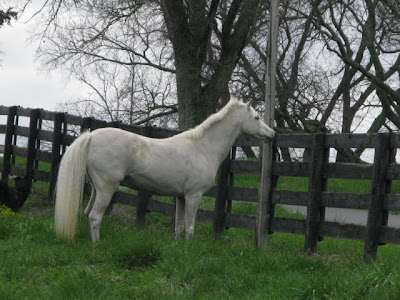 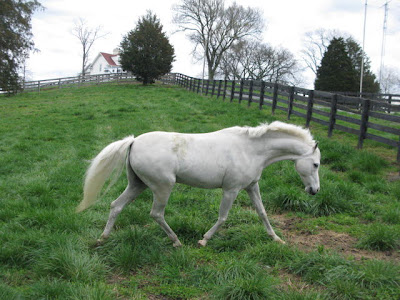 When I originally started talking with Cuffie's owners a few months ago I asked them if by chance he was a gray and did he used to show on the East coast? Because if that was the case I had seen him in person several years ago at the shows. As it turned out it is indeed the same Cuff Links who used to show on the East coast. I remember Cuffie as a dark, dappled gray but he has become a beautiful snowy white as he has aged. Cuffie is in his late teens and unfortunately is no longer comfortable when working due to arthritis.

Cuffie and his young rider all decked out; I would guess they were getting ready for an equitation class since he has his boots on. 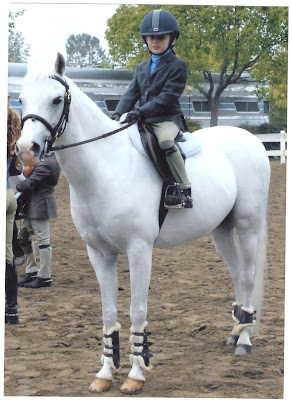 Cuffie and his young rider in the short stirrup division 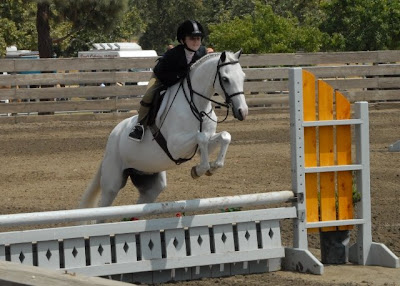 Cuffie is well loved by the family who has owned him for the last few years. He has taken great care of both of their daughters. Unfortunately his time with their youngest daughter was cut short due to his retirement. Luckily for Cuffie they all want the best for him, and instead of pushing him anymore and trying to keep him going they decided to give him the retirement he has earned. On top of that they chose to ship him to our farm where he could enjoy life in big, grass pastures and let him return to the grazing that he loves so much. They definitely made the right decision in that regard, like I mentioned Cuffie is a VERY dedicated grazer! I expect that he will eventually lift his head from grazing after he gets to be out in a grass paddock for longer periods of time. We will be using the next month to continue to slowly re-introduce his digestive tract to grass. 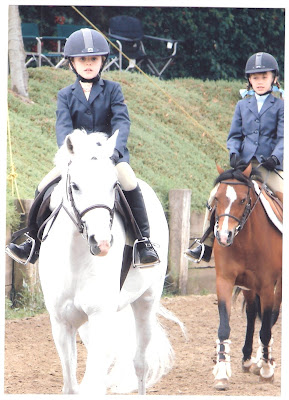 We have all thoroughly enjoyed our first few days getting to know Cuffie. Sometimes I have to remind myself that this is actually my job, not just what I want to do because it is fun every day. Taking care of a pony as sweet and cute as Cuffie is simply a very easy way to pass the time! It is ok to admit that you are jealous. I will admit that I have been gloating ever since he arrived. Hey, all of us horse crazy girls all dreamed of having the cutest pony around to call our very own. Well I can't officially call him mine but he does live with me now! My own childhood pony Daisy was an amazing pony and loved dearly by not only me but my entire family until the day she passed away. I have to admit though that Cuffie wins the cute contest. He also came complete with his very own purple Rambo Wug blanket. The cute factor is downright painful!
It has been my pleasure to introduce Cuff Links and to welcome him to our farm. We have a few more future residents waiting in the "queue" to join us for retirement. I'm looking forward to meeting each one of them in the upcoming weeks and months. What a great life!
Posted by Melissa-ParadigmFarms at 8:14 PM

Me and Cuff Links share the same birthday.:) We are both April fools babies!

He definitely is adorable.:)

Welcome Cuffs! What a beautiful pony!! I definitely have the jealousy.

Oh. My. God. He is absolutely the cutest thing I've ever seen. I have major jealousy because I was always too tall to ride the pony hunters. I don't think I've ever gotten over that.

How cool too that you got a pony in that you "knew" in his previous life!

An utterly adorable pony! It's great that his owners cared enough about him to retire him instead of selling him on. It looks like he had a bath before (or after) he came to you!

He is utterly adorable! Kudos to the fantastic family who chose to retire him with you, I love hearing stories like that.

No, I have not seen a cuter pony than Cuffie!! Adorable! Congratulations on him! Happy Birthday Cuff Links and ZionFarm!
Hey we have a tie over at the give-a-way....there's another question to answer for a tiebreaker! Come on over when you can! You got 3 out of 4 questions correct! Great job!

Whoops! Sorry! I needed to go to Thoughtfullyblendedhearts instead....you've already answered your question! Disregard please! Have a good evening! Hopefully the results will be in tonight and you can go choose your pendant!

Cuffie is so darn cute!!!! I love watching the ponies next door do their jumping rounds, they are just adorable! I'm glad to see a pony as well-deserving as Cuff Links retire from a nice, eventful career and just be a horse. Awesome job, guys.