Today was one of the horse's favorite days (not) - worming day. We have to do this a few days each year and I finally woke up and realized these days could be hard or easy. I've mentioned this on the blog before but a couple of years ago after a morning of chasing down horses and having paste wormer all over my hands I decided their had to be an easier way. Since the majority of the horses live outside 24/7 I don't have the luxury of just going from stall to stall and worming all of the horses. And once you've put the tube of wormer in the first horse's mouth out in the pasture, they all KNOW what you want to do and play the "you can't catch me" game.

Thus the next time worming day rolled around I prepared feed as I always did. I put the feed in the feedbags, put the feedbags in water to soak, then removed them from the water and add any medications and supplements that might be needed. Except that morning every horse had a "supplement" in their feed - paste wormer! To my delight they all ate it, every single one of them. A few of them tried to not eat it but that is the beauty of feedbags, they cannot walk away from their feed, it just goes with them. They can't graze or eat hay instead of eating the "poisoned" feed. So after awhile they just gave up and ate. Although surprisingly most of them don't even act like they notice there is anything different in their food, they just gobble it up like normal.

I've refined my approach a bit since my initial attempt at an easier way to get through de-worming day. I now know the ones that take forever to eat their wormer laced feed, there is a handful of them, and I just shove the tube down their throat the old fashioned way. They will eat their wormer laced food eventually, I simply find it quicker to just shoot it down their throats than stand around waiting for them to finally eat. However it is a lot easier to do this with four or five horses and not all of them. My hands (and my hair) are not covered in horse slobber and paste wormer and there are no "runners" to chase down.

I don't know how well this approach would work without the feedbags. It would be easy for the horses to just not eat, go graze or go eat hay. The other advantage I have is all of the horses are used to eating soaked feed every day, and it is so much easier to mix and hide stuff in soaked feed. I guess my point is I am not sure how well this work if you just mixed the wormer in with dry feed in a feed bucket in a stall. Luckily for me it works like a charm for our set-up!

Homer trying to get Slinky's attention over the fence 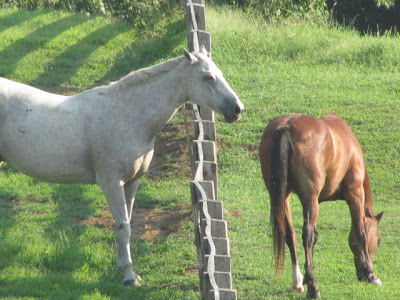 Pay attention to me little pony!! 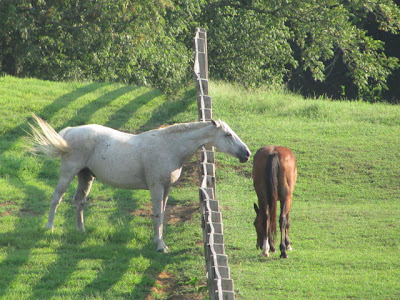 Fine, if you are going to ignore me then I will ignore you! 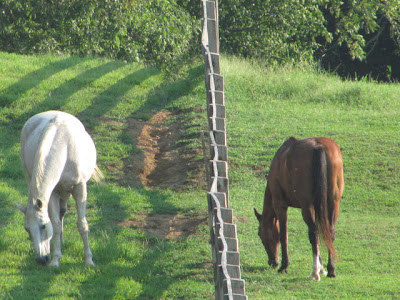 Lily was very unhappy after having a bath. I have no idea what prompted Jason to start scratching her belly with a broom while she drip dried in the wash rack but he did. 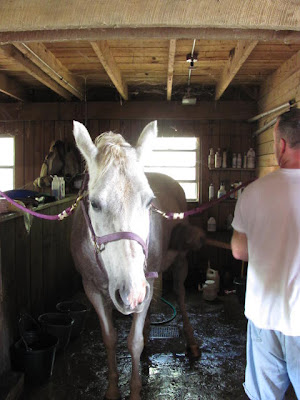 Her expression changed from grumpy to happy 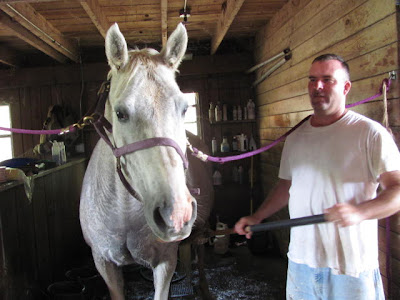 Josephine (Jo) wanted Wilhelmina (Mina) to play with her. Mina kept ignoring her so Jo decided to stand on her. Of course we all know they are the World's Cutest Fainting Goats. 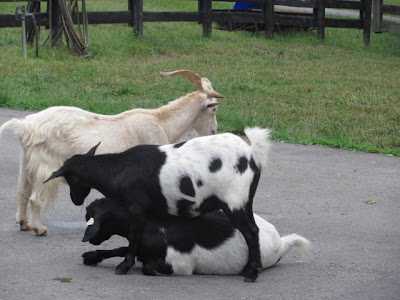 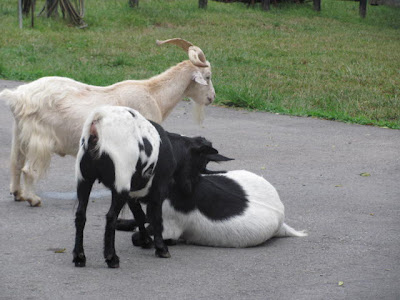 Then Jo tried pawing Mina with her leg 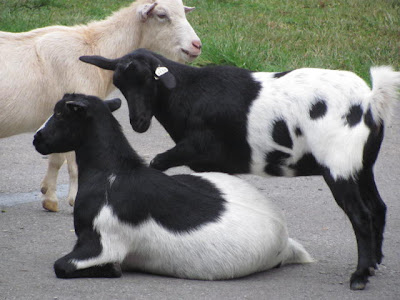 I'm not exactly sure what Jo was doing here but it didn't work because Mina did not get up to play. 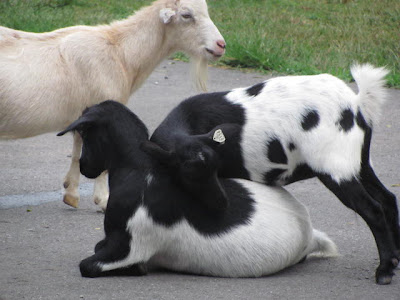 Dutch and Murphy were grazing and The Don (rooster) joined them 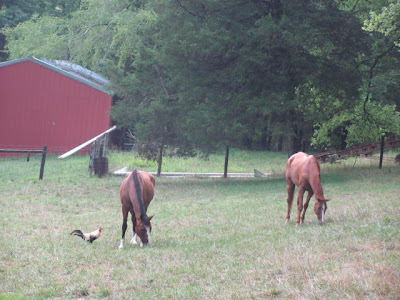 The Don hanging out with Fuzzy Punch and Murphy 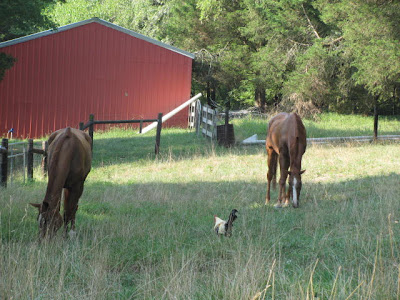 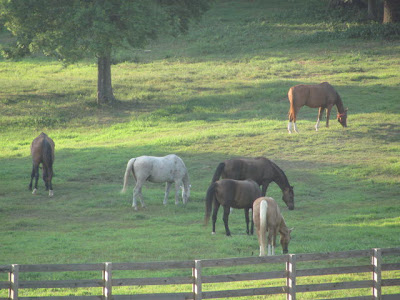 Ivan and Lightening playing over the fence 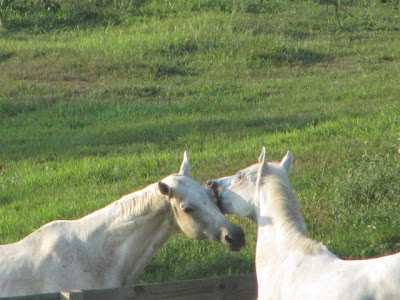 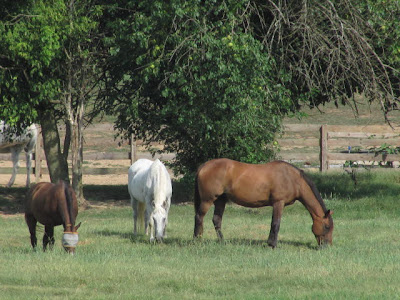 Posted by Melissa-ParadigmFarms at 8:25 PM

Sounds like a clever way to do the de-worming deed!
I'm curious: What type of feed are they getting in their feedbags that you can soak it? My one old retiree gets his Senior pellets soaked, but they end up a mushy mess. The "senior soup" works well for him in a bucket, but I would think he would drown if I put it in a feedbag!
I'm impressed with the view of the fence between Homer and Slinky! From the side my fences look pretty straight, but if you look down the length of them like that...well, not so much.

Oh, and by the way, our local rescue sells the little (3 foot long, 6 inches across) garden rakes as horse belly scratchers. Maybe Jason should invest in one!

EvenSong the feedbags have mesh sides and a solid bottom so they can even drink from the water trough with them on with no problem. The extra water just runs out the sides. We feed Triple Crown feeds and most of the horses get TC Senior.

Lily HATES bathes, always has and always will. Good idea of Jason's to scratch her belly - she love scratches!

Our horse citizens are all pretty good for worming, and I get to so it in their stalls.

You should try the liquid form of dewormers. I switched years ago. Even though some are prescription and there is some minor phone calling and faxing to be done for that, the ease of mixing with feed makes it a lot less work than mixing paste in.