As we start preparing our new farm, where we will have some more room, we are welcoming a few horses off our waiting list. Dutch is one of the lucky horses whose owner waited patiently for over a year until we had an opening. Dutch arrived last week and he has been a wonderful addition to the farm. Although he is in his mid 20's Dutch didn't get that memo, or he subscribes to the philosophy that age is only a number, because most of the time he acts like he is about three years old!

Dutch; he is a very pretty bay with a big, white blaze and four socks 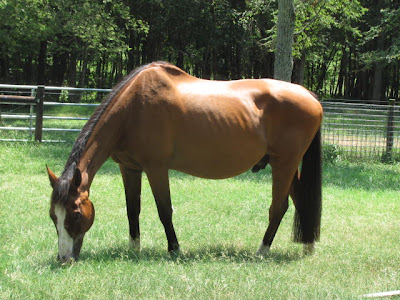 In addition to all of his chrome Dutch has one of the most gorgeous tails I've ever seen on a horse. His tail is so long and thick it is unbelievable, this picture does not even come close to doing justice to his tail. 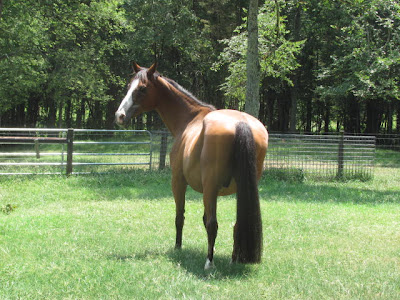 When I say Dutch is lucky I mean he is VERY lucky. Dutch came dangerously close to having a one way trip to Mexico or Canada to a slaughter house. So for all of you who think that it is only the "fugly," poorly bred, poorly conformed, dangerous or crippled horses that wind up at auctions you are wrong. This is a NICE horse, in conformation, movement and temperament. I've seen him trot many times and he has a big, floaty, ground-covering stride with a lot of push from behind. As far as his owner has been able to discover his only "crime" was that he got older and could no longer stand up to hard work anymore. So don't kid yourself that anyone but you will provide for your old campaigner. Dutch was lucky, but most horses in his situation are not.

Dutch a few weeks after he was purchased from the auction. This means he looked even worse than this originally! His poor neck looks like a pencil. 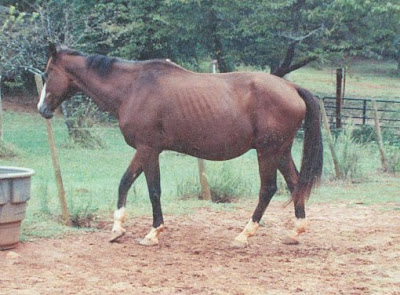 An "after" picture of Dutch. Look what a few months of good care and FOOD will do for a horse. Here he and his mom are taking a dressage lesson. The first thing I noticed about this picture was how nice and square he was standing, clearly this horse had some good training prior to his life taking a downhill slide. 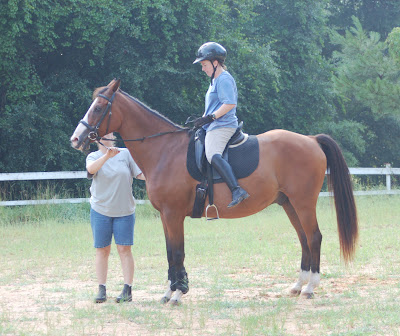 His owner has done her best to try and piece together some of Dutch's background. Unfortunately there are a lot of gaps in his history but he is a Dutch Warmblood and was about 20 years old when he was purchased at the auction five years ago. A co-worker of her husband's regularly went to the auction and would purchase horses to train/retrain/ and then resell. Thank goodness for Dutch that he was plucked from that auction.

Dutch showing off his gorgeous trot, look at his length of stride. 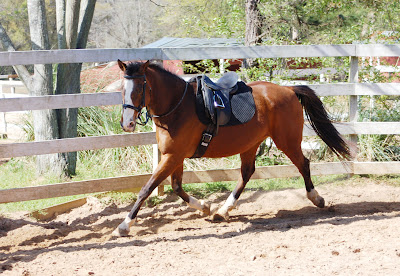 His mom took basic dressage lessons on him and they also trail rode together. She had hoped to take him to some schooling shows but unfortunately they never made it to the show ring. Dutch suffered a ligament injury (which he recovered from), and when they were back to work his respiratory rate would get quite high very easily regardless of fitness level. So his mom changed her goals to fit her horse and they mainly did a lot of trail riding together. Dutch's mom deserves a huge round of applause for all she has done for this horse!
Look at his gorgeous face. He deserved so much better than winding up at an auction. 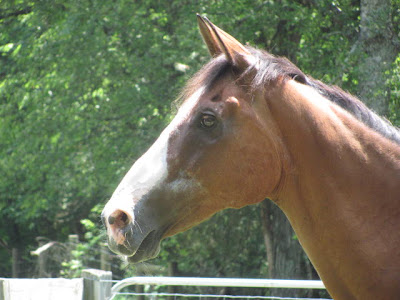 As I mentioned earlier Dutch is in his mid 20's going on 3. He notices everything and was quite fascinated with the goats the first few days. He would watch them any time they were within sight. When the mood strikes him he likes to run and buck and play. He thoroughly enjoys a good roll. He is very social with other horses and loves to groom his new friends. I find it very sad that a horse like Dutch found himself at an auction one step away from a slaughter truck. If I knew the name(s) of whomever dumped him at that auction I would post their names on a billboard with blinking neon lights and let the world know what charming, responsible people they are. His mom is a very special person for all that she has done for Dutch, and we are so appreciative that she trusts us with his care.
Dutch has had quite a journey from the auction barn to horse retirement paradise over the last few years. He earned his place here and I'm so glad that fate intervened and allowed him to find his way to his mom. Welcome Dutch! 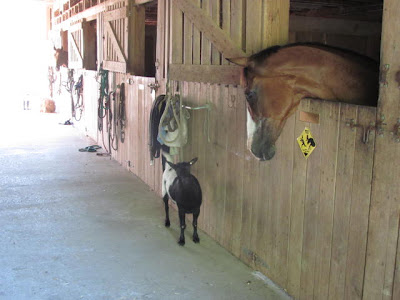 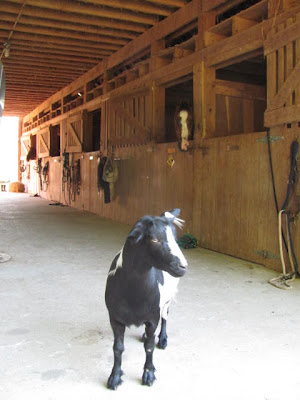 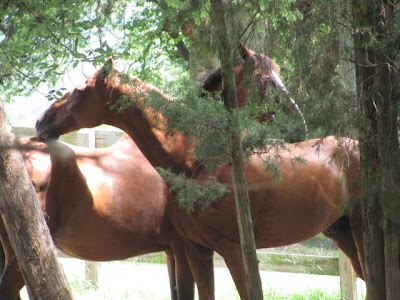 I didn't get a chance to comment on your ground-breaking. Congratulations! Looks like you have excellent contractors (always nice to arrive to find everybody working!) And that soil is lovely! I'm sure it will grow beautiful buttercups, lol.

I love new arrival posts at your farm! What a great story, and good reminder to keep track of our horses... not that java is going anywhere... EVER. Yay Dutch and his owner!

What a lucky boy! I *love* the two pictures where Dutch is very curiously looking at the goats :D

What a lovely boy. I feel like I am looking at pictures of Faune when he first got there. Welcome, Dutch!

He's one lucky horse, and his mom gets a lot of credit - older horses need people like that to cherish them and use them in ways that are suitable for their age and condition. I can't imagine what would lead someone to treat a nice horse like him as disposable - but, wait - I don't have to imagine it, I've seen that sort of "the horse is a piece of sports equipment to be thrown away when broken" thinking in lots of different horse disciplines - or perhaps it was just plain "trading up"!

Anyway, he's really lucky to have ended up with his mom and now you.

What a handsome boy! I just love a happy ending.

I wonder if I am the only one who asked: Who is Murphy? =O)

Good question PhunnieOne! Dutch and Murphy travelled here together (from different states but the same shipper) and he hasn't been introduced yet. But he will be soon!

I found this Melissa and wanted to read more about Dutch! What a fantastic horse and beautiful soul! He is wonderful.
I agree with what you said, about posting the names of his former owners in neon lights for sending him to the auction.
I'm so glad he found his way to his mom and you!