There is so much to love about the stories of Justin and Boo, not the least of which is that their owner, a very remarkable young lady, has been completely and solely responsible for their bills and care since she has owned them. Now this might not seem that impressive until you realize that she bought Justin when she was eleven years old, and then acquired Boo when she was thirteen. Since she was eleven years old she has paid the board bill, the farrier bill, the vet bill, purchased tack - and has done this completely on her own. I am even more impressed that she has done this on her own for two horses since she was thirteen!

Justin is a 29 year old Quarter Horse/Thoroughbred cross. When his mom went on her horse hunt at the ripe old age of 11 Justin was not what she was looking for. As she said, color is important when you are 11, and what she wanted was a sorrel horse with a flaxen mane and tail, and most importantly, with lots of chrome. When she went to look at Justin what came out of the stall was a fat mud colored horse with no chrome and a star that looked like the western hemisphere on his face. She was in love and agreed to buy him… in 4 months.
Justin with his facial marking that resembles the western hemisphere 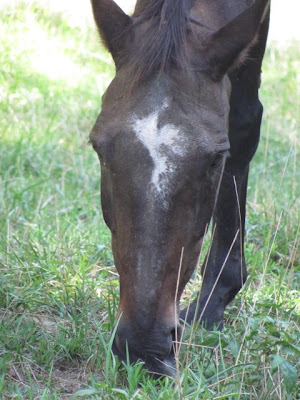 During that 4 months she found a boarding facility and purchased tack. When the big day finally came she was up at 5am (in her words up earlier than she ever had been for Christmas) and their beautiful friendship began. Her mom would drop her off at the barn at 7am and pick her up at 5pm, and she and Justin spent their days together. 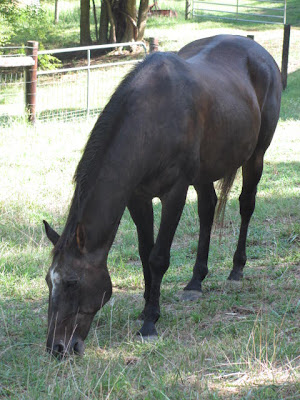 I love this story she told me when a fellow boarder saw her and Justin. The fellow boarder had come down to talk to the barn owner (83). The boarder looked up to see her and Justin running flat out in the pasture. Shocked and alarmed she exclaimed “We need to do something to help that kid – her horse is running away with her!” The barn owner just smiled and said “She’s alright… that’s her dad over there – he’s timing her!” 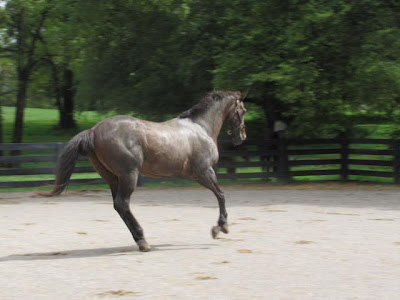 Justin and his mom also did a lot of showing locally. They showed in hunter flat classes, Justin's show name is SS Just Like Clockwork. He would switch gears from racing around the pasture to being a steady eddy at the shows and they were regular winners.

Justin's earlier years were not as idyllic as his years with his mom. He was someone’s dressage prospect when he got into a trailer accident. His people
dumped him at the local auction… notorious for passing through sick and unsound (physically and mentally) horses. He ended up in the hands of a horse trader who was looking to make a quick buck. Problem was, the horse trader didn’t get along with Justin and his wily ways. So Justin was turned out in a dirt arena and essentially forgotten. There were only scrubs of grass here and there, he was not being fed, and the only water he drank came from accumulated rain in an empty bucket. He had lost a tremendous amount of weight, and was about a 2 on the scale with remnants of bloody wraps hanging off of his legs when he was rescued. Justin's rescuer spent a long time re-habbing him, and apparently she had a good feeling about the 11 year old girl who looked at him when he was ready to find a new partner - and she was right.

Justin and Boo being rambunctious; they love to play 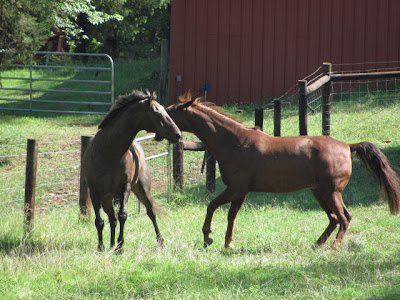 Boo is a a 22 year old Saddlebred gelding and was originally on the racking horse circuit. Racking was hard for Boo, as he had a tremendous amount of hock action. That made it hard for him to ‘sit’on his hind end and shuffle off. Problem was that once he got his hind end in gear, he was so good that the trainers kept making him do it. It made him crazy (not a cute crazy but more like “I will run THROUGH that wall with you if you touch my mouth again” kind of crazy).

Boo wound up working his way through a series of bad situations (that tends to happen when people fry a horse both mentally and physically) and ended up living in a pasture by himself for four years. Through a series of twists and turns someone told his mom about Boo. At the ripe old age of 13 she had decided to purchase a second horse to show. Boo was described to her as “a big, bold chestnut Saddlebred named Rex. A real show horse." 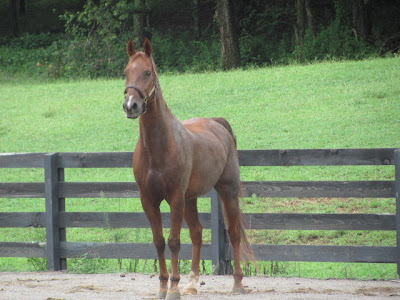 After hearing about Boo's history, she was expecting nothing short of a giant fire breathing monster. He came in late one night, as it had taken the owners all day to catch him out in that field (remember he hadn't been handled in 4 years), put shoes on him and drive him to the barn. They put him in a stall until the morning. Just as she did with Justin, she woke up early and jetted out to the barn. The stalls at this barn were hollowed out from years of use, and this particular stall had about 10 inches of difference between the barn aisle and the stall floor. She flipped on the light and opened up the door, expecting to see her giant fire breather named Rex. Instead, she saw the cutest little pony with big brown puppy dog eyes looking at her with his ears pricked forward as far as they would go. He was so cute, and she smiled as she asked him “How are you doing Boo-boo?”

The first few years of Boo ownership were touch and go as Boo was quite unpredictable. One time, they were riding up to the arena (her horses stayed in pasture, and to get to the arena, they had to walk up a gravel road about 1/8 mile away). They were halfway there when Boo lost it for no apparent reason, as they ambled along bareback with only a halter and leadrope. Boo wheeled with enough speed to rival a good reining horse and then took off down the small trail next to the gravel road at a dead gallop; she had to dodge tree limbs and saplings as he blindly ran down the steep trail.

Boo has a big, floating trot stride when he really gets going, it is lovely. When I was watching him run, buck and play in my arena it made me think about the story of Boo jumping the Honda Civic - not planned by him or his rider! 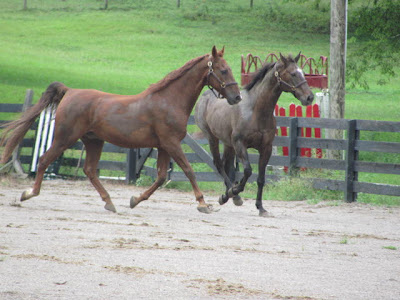 Being young, his mom just laughed at him the whole time while attempting to stop him. But there was no stopping him. They quickly made it to the bottom of the trail, where everything opened up. In this area to the right was the tack and feed building for the pasture horse owners. She assumed that as this was where he was fed every day, this is the direction he would take. Wrong. Straight ahead at the entrance/exit of the trail there were two trees about 12 feet apart. In her words: "In case you’re wondering, that’s just enough space to park a Honda Civic… a brand new Honda Civic. As Boo passed his exit opportunity to the right, I looked forward to see what was ahead. He was going so fast he didn’t even have time to think… and so we jumped over the Civic. I’m sure it was a fantastic sight to see from the ground, but the only words that came to mind as we were sailing over were “Holy S***!” Thankfully, he cleared it. But, it was a while before I rode him up to the arena after that!

The Don being curiously followed by yet another horse (he has to break them all in!) 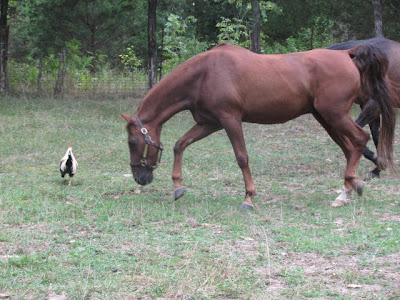 Boo and his mom spent many years showing together on the local Saddlebred circuit doing the hunter classes. They won more than their fair share of classes and championships. Later they dabbled in barrel racing and gymkhana events, and did well in them as well.

I hope you enjoyed reading the stories of Justin, Boo and their amazing owner as much I enjoyed learning about them. All three of them are wonderful in person. Jason and I are very blessed to be in a business that regularly allows us to meet not only amazing horses, but the amazing people associated with them.

Posted by Melissa-ParadigmFarms at 7:50 PM

Wow, what an inspiration! She must be a very interesting and amazing person. You guys really are fortunate to meet some of the most caring horse owners in existence.

Wonderful stories of two beautiful horses and their mom! One heck of a rider, even younger I couldn't have stayed on! :-)

I love your new horse stories - their mom gets enormous credit for sticking with these horses through thick and thin and then arranging a marvelous retirement for them.

YAY for the versatile Saddlebred!

Too bad there are so many adult horse owners who are not as capable and responsible as Juston and Boo's Mom.

I love all the owner stories, but this might be the best one yet. :)

What an amazing story! What guts! I cannot even imagine jumping over the Civic! I am so glad these terrific horses are able to have their retirement with you.