One of my favourite odors is the cool, complex wine-like smell of freshly worked earth in the spring time, just before lilac time, which itself is another one of my favourite scents. Unfortunately, lilac is a scent that is hard to reproduce this far south. There are a very few lilacs planted into the landscape in some yards. They are noticeable when they bloom in late March or early April, but unless one is fortunate enough to be present at bloom time, one misses the show and the scent.
I have noticed that horse barns (and horses) have distinct odors associated with them. I like the smell of Melissa's tack room, which is probably good as it helps me overcome some of the shock when she tells me how much the new bridle(s), leather halter(s), bit(s), saddle(s) etc. cost. Oddly, I also kind of like the smell of horse manure. The aroma is different from (and not nearly as sharp) as cattle manure, which I also like. Melissa tells me she likes the smell of her horses and she also tells me that they all smell different. (Melissa adding that I also really like the smell when you open a new bale of hay, the wonderful earthy smell right after it stops raining, and I really like the smell of most horse feeds. I genuinely enjoy starting off my day each day scooping out horse feed, I joke that the smell is like crack to me. My city friends really think I am nuts!).
I think my all time favourite smell is that of an old time farm shop. I sat for hours in ours when I was a child and I find myself drawn to sitting in mine even now, doubly so if there is a radio tuned to an oldies country station. (Melissa again - I really dislike old country music!) The odor inside is a combination of machine oil, shaved steel, grease, ozone, and other metallic and oily substances which over time become ingrained into the floor itself. In back of all these scents is the odor of the farm and the creatures that inhabit it which changes with the season.

What are your favourite odors ? What memories do you associate with favourite smells ?
MyLight 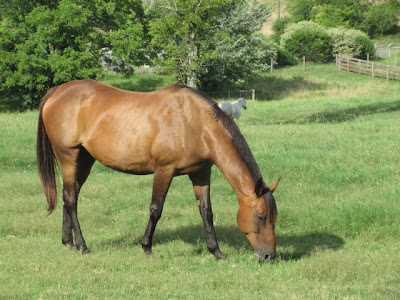 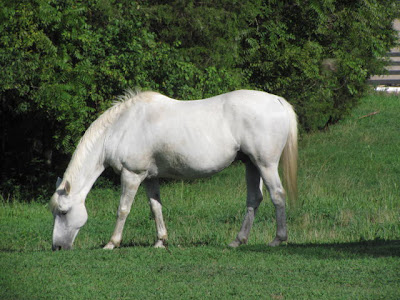 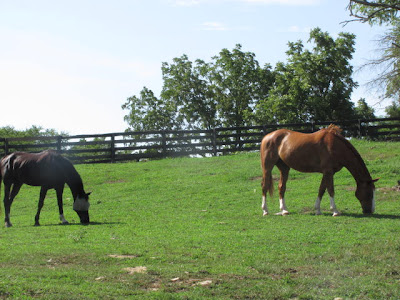 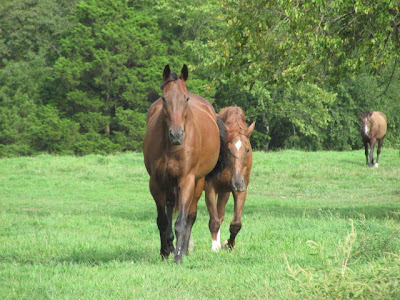 Tony (Grand and Baby in the background) 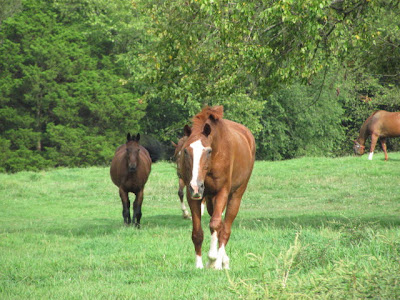 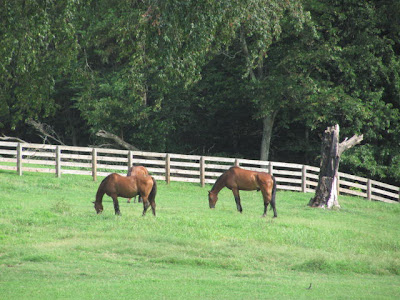 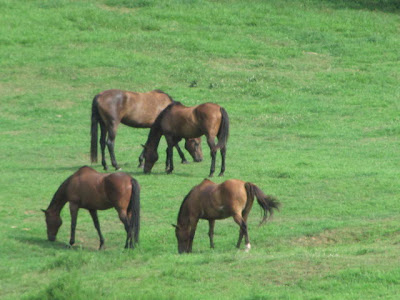 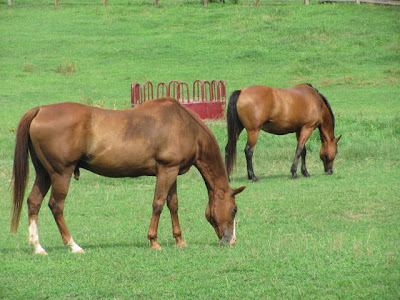 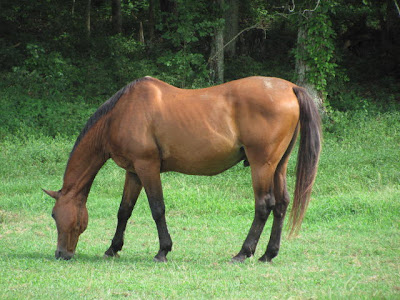 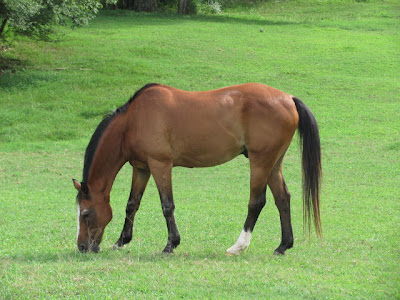 Posted by Melissa-ParadigmFarms at 8:25 PM

Great post! I love the smell when the rain first comes. Fresh cut grass, apple blossoms, the lake, spreading season (depending on which farmer is spreading ;) ) horse manure, puppy breath, and my favorite....horse muzzles! Oh, and sweaty horse blankets/pads/leather. And fresh baked bread. Lol! And cookies......

Oh, I can totally relate! I love the general smell of horses, leather, and yes, their manure too. Cow manure is, to me, something pleasantly familiar and brings me back in time but I can't say I truly enjoy it. I do enjoy the memory associations, which are strong.

I can't say I've ever noticed that each horse smells different - I am very intrigued Melisa!

I do not like the smell of lilac. Although I have one and like it well enough, I find the smell too perfumy for my taste. LOVE the smell of horse feed...it's as good as coffee to make me feel alert. Probably better.

That farm garage smell...I love it too. Cognitively, I don't really like the smell of grease and stuff, but somehow a farm garage combines all the earthiness of animals and crops with the machinery. Like cow manure, I have a lot of positive associations with it so it's hard to tease out whether I like the smell, per se, or the associations. My dad, who has not been part of my life for a long time, was a mechanic. I suspect I also associate the machine/grease smell with him, too.

Dog feet. Stinky dog feet, especially in the winter when they seem to smell the most. Love it.

I love all the horsie smells of hay and leather and manure, but I'm with you and the machine shop. I love the smells of 90 weight oil and fresh asphalt. I don't admit that much. :)

Hey! You forgot the sweet smell of GOAT! Hee hee. Well...not our pooh or our burps but our coats smell awfully nice. My lady loves to hug me and give me a great big kiss and a sniff! She agrees with Melissa...her horses all smell different with Nigel smelling especially nice.

I love the fresh smell after a thunderstorm, wet earth, fresh hay, newly mown grass, horse fur and even, as you say, horse manure! Sauteed onions, yeast bread . . . I could go on!

Every one in awhile, someone uses the same kind of flyspray my first barn used when I was a t-tiny kiddo. The smell always makes me a little nostalgic...

the other day all of our noses were offended because the neighbor sprayed cow dung all over his field. it was time to shut all the windows and hold your nose while outside!

i love the smell of horse vitamins, alfalfa or good grass hay, freshly mowed grass, the forests of home, and the side of my horse's muzzle.

i also love those strongly scented candles they have in america, where you light one and the house smells like you're baking something. the scented candles here are pretty much scent-free.

strangely, i like the smell of betadine because it means i've done my job.

and i think i'm the only person who always leaves the bakery with her bread pressed up against her nose: )

Yes, horses do smell differently, some moreso than others. In fact, just yesterday I was smelling William's nose and thinking that he doesn't smell like most grey horses do. some people look at you real weird when you smell a horse nose.

My grandparent's farm was an old fashioned farm even in the 1970's. We didn't feed silage or bed with sawdust. We fed grass hay and bedded with oat straw. I always thought the larger farm next door smelled awful (and still do). I prefer the mollasses and oats smell to silage any day!

Really, the countryside is such a cacophony of smells it is hard to single them out. I love the smell of oats (reminds me of the full granery) warm milk, lye soap (milk house) white wash, and this will probably sound funny, but the smell of men sweating beer reminds me of haying season. And the best of all... sourdough pancakes on the verge of burning. I like 'em dark. You can only get that from cast iron. Oh, and the woodshed. I love the smell of a woodshed.

I think super fresh horse manure has a tobacco-ish smell, different from dryer manure... I like them both.

Fresh mown grass, but only the first mow or two in the spring...

The smell of the sound (the Pamlico) on a north wind - briny with a touch of marsh grass decay.

So many wonderful smells and terrific comments! I love the usual, freshly mown grass and hay, horse, freshly baked bread and dog feet too! I love lilacs and miss them terribly in Florida (along with tulips and daffodils and crocus and lily of the valley!). I will add home grown roses- I love the smell of a beautiful rose, not the kind you buy which don't smell at all any more.

Back in high school I worked for a neighbour who owned Ontario's oldest water powered sawmill. I like the smell of a wood shed too and I also like the hint of wood smoke you get when standing outside the house on a cold winters day. I especially like wood smoke when it's mixed with food smells (like fresh baked bread with a slightly overdone top) out of a cook stove.

Valentino's comment about obacco reminded me of one smell I love. I love the smell of Northern Kentucky in August. When we get the chance to visit family in Shelbyville around fair time, I always roll down the car windows around Eminence, and just breathe in the smell of the soil and the tobacco. Mmmmmm... and spoiling cantaloupe reminds me of PawPaw's place. We would take all the extra tomatoes and the melons that didn't make it (darn terrapins) and feed them to the hogs. Not too many people have good memories associated with the smell of rotten tomato and melon!

I don't have a horse right now, but when Skipper was still in my life, I looooved the smell of horsey shampoo! He smelled so good afterwards, and his mane was soft as a baby bottom! :D

Musty books, that haven't been opened in years. Mmmm...

I used to love the smell of the Co-Op when I tagged along with my Grandfather, the "car house", the tractor barn and the diesel tractor smell, freshly cut alfalfa, and the scent of the hay loft when it was stacked to the gills, the corn crib, the tobacco barns, the way the truck smelled loaded with feed fresh from the mill, horse smells, pasture smells...