Mister O'Reilly was born in Ireland in 1992 and is an Irish Sport Horse gelding. When he was four years old, a friend of his current owners saw him in a field in Ireland, fell in love with his adorable little ears and starburst tail and bought him on the spot and brought him over to London. His mom's family was living in London in the late 90's and his mom was just about at the point of moving up to a horse from a pony.

Amazing how the little things in life can really set you on your path; here are the ears that started it all for O'Reilly. 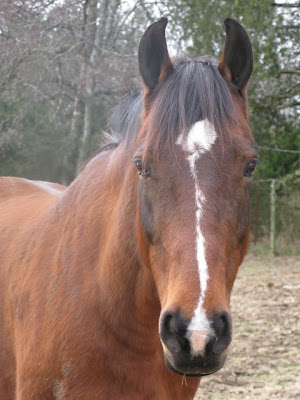 I would love this picture if it weren't for the shadows; you can still see the adorable ears though! 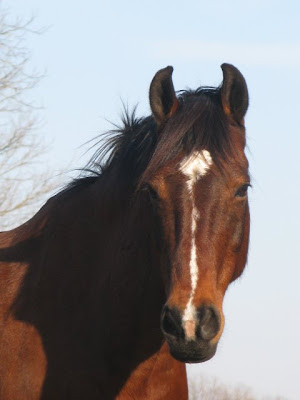 O'Reilly has the ultimate tail for playing Barbie Dream Horse. This picture does not do his tail justice at all. It is so thick he has enough tail hair for five horses! I've seen lots of amazing horse tails but O'Reilly wins the tail award, hands down. 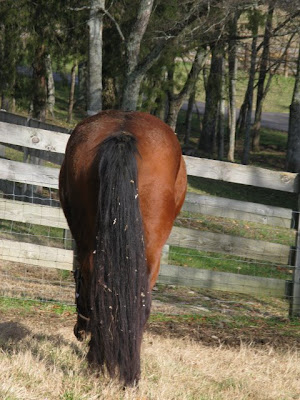 She met Mr. O at this friend's barn (the one who plucked him out of the field in Ireland because of his ears and tail) outside of London and fell in love with him. He had been in formal training for over a year and was ready to start in a program with someone so he became a part of her family. His mom told me that O'Reilly loved London. He was stabled in Richmond Park and was able to go out on trail rides in the beautiful park every week after equitation training. Apparently in his young days he was quite the firecracker and took to galloping off with his mom in the park and giving tourists quite a show!

O'Reilly still has plenty of his firecracker attitude. Here he shows off a nice leap in the air as he plays in the melting snow. That is Traveller rolling behind him. 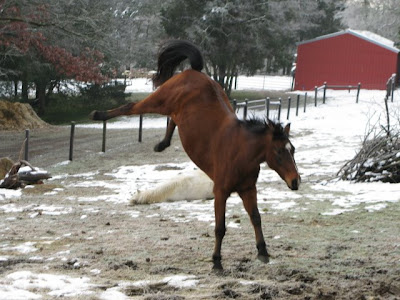 O'Reilly running through the field with Traveller. Look at that tail flowing behind him! 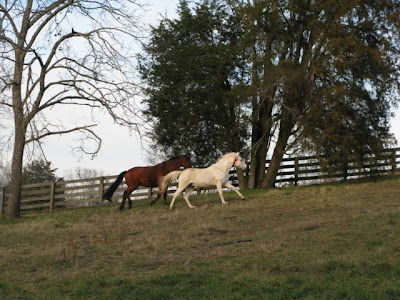 When the family moved back to the States, of course Mr. O came as well. At this point O'Reilly and his mom started doing the Hunter divisions together. She told me that one day she was sitting on a tightly braided and shining O'Reilly at a Culpepper Horse Show. As O'Reilly fell asleep with his chin on her dad's shoulder, her dad looked at the jumper ring and said to her, "you would never do that." She turned to him and said, "I'll bet you a puppy that I most certainly would do that and get around clear." He said, "prove it," and she marched right over to add her name to the order-of-go.

Three bays; L-R Bridget, Lexi and O'Reilly. Of course Bridget and Lexi are mother and daughter but from this picture you might think they were all three related. 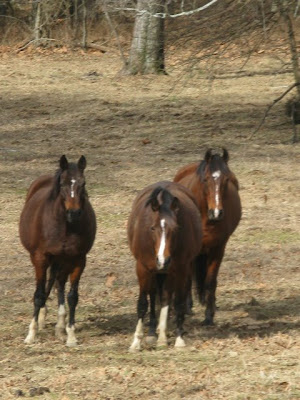 Poor Mister O'Reilly did not know what had hit him! But they marched into that ring, saluted the judge, and completed their first jumper course... clear! She said her horse immediately became known as "Saint O'Reilly." Thanks to their "proving it" with a clear round they also added a very naughty Jack Russell puppy to the family! After that day, the jumper bug had bitten her, and she and O'Reilly were off on their next set of adventures.

Poco, Sparky and O'Reilly hanging out in January 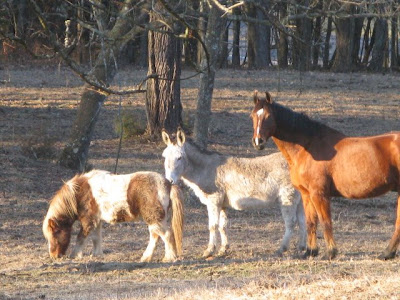 Mister O, as he was known in Florida, really seemed to take to the jumpers as well. They competed in Wellington for two winters. They also competed all up and down the East Coast and O'Reilly never missed a beat, always brought home a ribbon, and according to his mom had the time of his life doing so.

O'Reilly over the fence 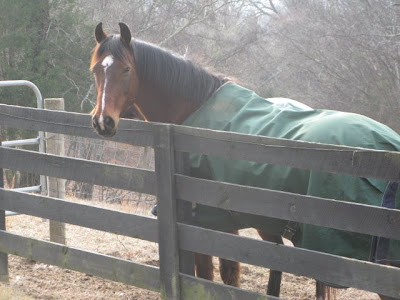 Throughout the years O'Reilly has been through many variations of his name since he joined his family. During his firecracker days in the park in London, he was "Oh, really, O'Reilly;" after the first jumper course at Culpepper he became Saint O'Reilly; and, during his winning days in Florida, he was known as Mr. O.

Taking a nap to ring in the new year; maybe he partied too hard overnight! 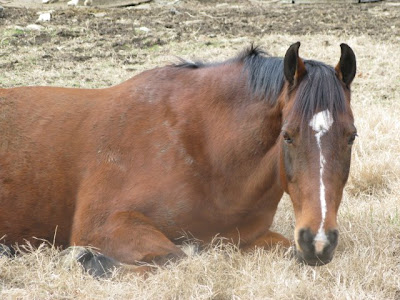 When his mom moved up to the big jumper divisions and beyond O'Reilly's scope he then became her little sister's first horse and took her up the ranks for a couple of years as well. He has been out of work for a couple of years due to a persistent soft tissue injury, and the decision was made to officially retire him last fall. So O'Reilly was off to his next adventure, joining us in retirement at Paradigm Farms!
O'Reilly setting off on his early morning adventure . . . coming for breakfast! I just thought he made a pretty silhouette as the sun was coming up. 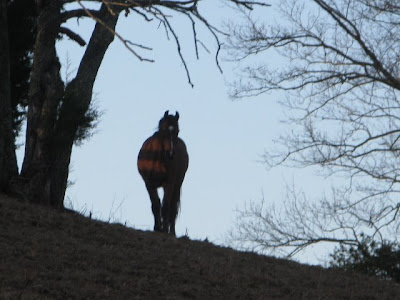 Posted by Melissa-ParadigmFarms at 9:53 PM

Love him! He looks like he has the life of O'Reilly now with you! His ears are really different! I have a book that tells the characteristic personality of a horse by his features...ears, muzzle, eyes and swirls. I'll have to look this one up! So cute...kind of reminds me of an Arabian's ears. Thanks for sharing this newcomer!

What a cute boy! He must have a caring family to give him such a fine retirement.

I'd love to see some old competition pictures of him. He looks like he'd be something else!

They look like little devil horns, hehe. He sounds like such a sweet horse. I love the one of him, the pony and the donky in smallest to tallest. That made me giggle. Sounds like he has had a nice life :)

What a tail! I can't even being to say how many horse owners would give an arm and a leg for that tail!

What a lucky boy. He sounds like he's lived a very eventful life and continues to make the best of it. It wonderful to see happy endings.

I actually like the pic of him with the shadow on his neck. The shadow is like a reflection of his head and I think the effect is pretty neat.