Jason made a quick trip to the small gas station/convenience store that is about a mile from our farm to get diesel this afternoon.  As he pulled in he saw a man standing next to his horse who was standing quietly, ground tied, a few feet off the highway.  Jason was quite impressed by the fact that his horse just stood there quietly with traffic whizzing by a few feet away so he went over to have a chat. 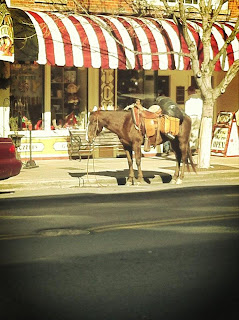 The horse's name was Angel and Jason said she was very friendly and she looked fabulous.  Her weight was excellent, she was beautifully groomed, and her eyes were bright and happy.  Angel and her owner have ridden over 4,500 miles together as they have made their way around the United States.  Apparently the man had a stroke and he realized how short life could be, and he had always wanted to see the country from horseback. So he set off on his horse and 4,500 miles later here they are. He also wanted to show other stroke victims that life can go on after such a devastating event.

in Columbia, TN; photo credit to the Columbia Daily Herald 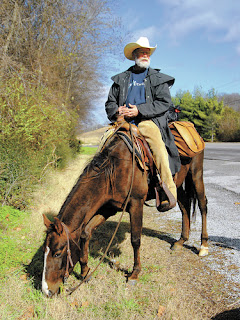 Jason certainly enjoyed his brief conversation with Angel's owner. I wish I had taken a quick trip to the store with him today instead of staying at the farm.  You just never know who you will end up talking to if you take a minute to say hello.
___________________________ 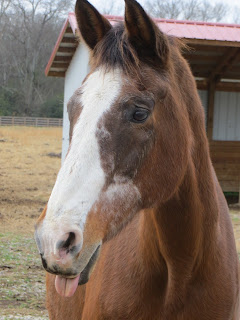 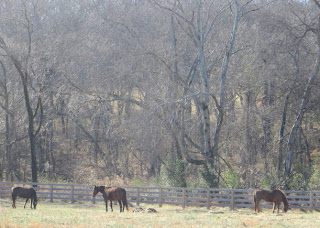 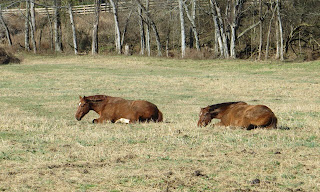 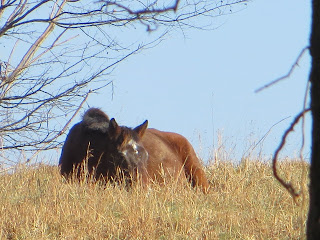 I always wonder who has their head buried in the hay... 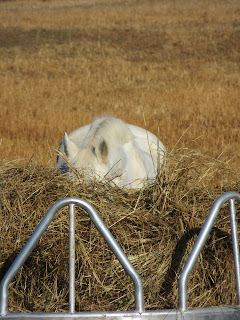 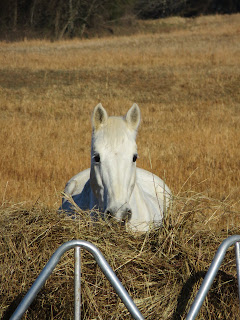 Sam on the go 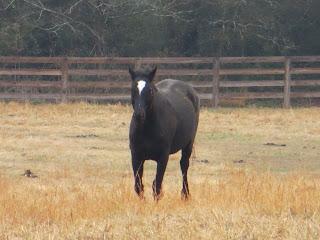 Johnny, Alex and B-Rad on the move 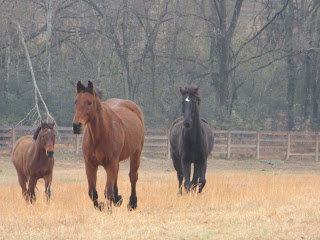 the view to start the day; Asterik, Gus, Titan, Winston, Romeo and Lotus 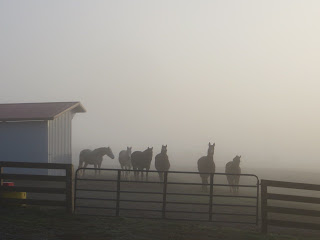 Posted by Melissa-ParadigmFarms at 9:15 PM

That is so cool - what a lovely story about a happy partnership! Thanks for sharing. :D

Adorable horses and wonderful place for equine. How lucky you are and your horses to harm this beautiful farm to dwell in together.

Great to hear of someone doing this typr of journey and taking care of their horse. Angel surely has the right name!

Great photos today. Loved Dutch, Rampal, and Sebastien especially. Not to mention the morning welcome committee :-) (curious - did the white markings on the side of Dutch's face come with advanced age or was he always marked like that? I don't know how old he is but thought those were interesting markings!)

Now that is a ride and a half! Bet he could tell a tale or two!

How cool was that to see Angel! I'm jealous - I've never seen a horse parallel-parked somewhere you wouldn't normally find a horse. I wish them much luck on the rest of their ride.

RB I'm not sure about Dutch's white on his face. I would guess it is probably a combination of more white hairs with each year that goes by and he probably had a little bit of that when he was younger. Dutch was a rescue (bless his owner for taking him!) so his history is pretty much unknown. He is one of the older residents on the farm so for sure a lot of the "extra" white would be due to age.

I remember reading a story in our local paper this summer about a man who passed through our town on horseback, and I swear it was Angel. Now I'll have to look it up...