. . . or maybe I should say our shut-off valves.  Yesterday Jason and I were cleaning troughs which is normally no big deal and a quick and easy job.  Us being us we managed to make it into a massive ordeal and it ended up taking us a couple of hours to clean one water trough.  The whole process is simple, shut off the water, drain the trough, clean the trough, turn the water back on and refill the trough.

Jason: Maybe we didn't install a shut off here.

Me: Of course we did, we've cleaned the trough many times.

Jason:  Well it isn't here. We must have forgotten to put one here.

Me: We didn't forget to put one here, we've used it many times before.

At this point Jason stomps off to find a shovel while yelling at no one in particular. He comes back with the shovel and makes a few half-hearted stabs at the ground and then announces in an authoritative voice "There is NO shut off here."

I've moved past seeing the humor in the situation and I'm getting really irritated at this point. Through experience I've learned if I simply move to take over one of Jason's perceived tasks this usually spurs him into action. So I announce "hand me the shovel, I WILL FIND IT." I grab the shovel.  Jason immediately yanks it out of my hands. He announces that he is not wasting his time on this anymore and he is going to just shut the water off at the driveway.

You see, Jason and I were really thoughtful and thorough when we designed our entire water supply system for the farm.  One of our must-haves was multiple shut-off points. Each pasture has a shut-off valve by the water spigot and we also installed several shut-off valves along the main pipe that runs parallel to the driveway. This way we could easily isolate leaks, turn off water to very specific locations, etc.

Jason stomps off again, this time to go turn the water off at the shut-off valve by the driveway.  I know something is amiss when I hear "you have to be bleeping kidding me!! What the bleep is going on? BLEEP! BLEEP! BLEEP!"

At this point I can't help it and I collapse on the ground in fits of hysterical laughter.  "You mean we have managed to lose two shut-off valves on a water system we installed ourselves?"  Jason sees no humor in this whatsoever and throws the shovel down like a two year old.

I decide at this point I should pick myself up off the ground, stop laughing, and attempt to be the voice of reason.

Me: Jason, we just need to dig around and find the valve by the trough. I know it's here, we've used it several times, and it has just gotten covered up by gravel.

Jason: just stands there glaring at me with his hands on his hips

Me: I pick up the shovel and start digging.

Jason:  takes the shovel from me and starts digging.

We have an intense discussion trying to remember where the valve was (after all we had just used it 3 months ago) and Jason is digging everywhere I point.  We had made a giant mess, dug up our gravel around the tap and gotten it all muddy, and finally we found the stupid shut off.  It had indeed gotten buried under the fresh gravel we had spread in the fall, except we started digging around several feet away from where we needed to be.

We finally get the water turned off and in short order the trough is drained and cleaned.  Then we think "finally, we're done" and turn the water back on. The trough fills up until it is full . . . and then keeps filling.

Jason has what we southerners call a "come apart" at this point.  Imagine bad words, flying tools, stomping feet, pounding our hands on the fence, etc. and you get the idea.  We shut the water back off. Jason goes to collect tools and parts, and an hour later all is working normally again.

I think we set a new world record, two hours for two people to clean one water trough.

digging around trying to find the shut off 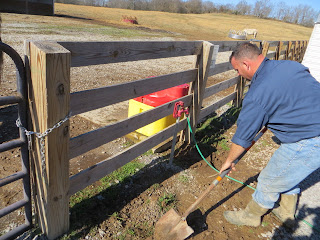 after creating a giant mess we finally found it 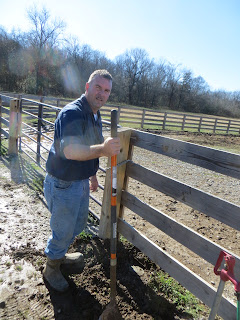 See that circle under the fence board? That's the cover where the valve is located. Apparently we have very bad memories as we started digging about eight feet to the right. 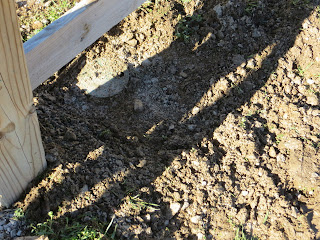 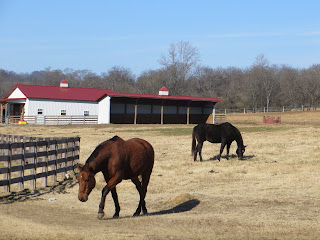 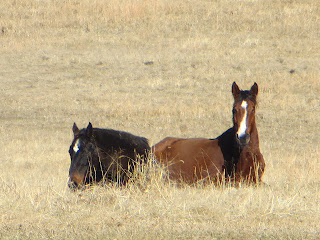 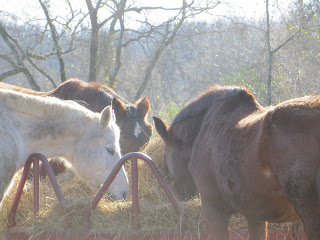 a cute scene with alternating standers and nappers; L-R is Chili, Johnny, Renny, Dutch, Murphy, Sam, Wiz and Africa (the dot back by the tree line) 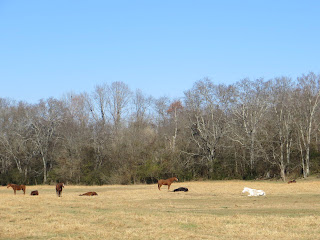 zooming in on the photo above we have Chili, Johnny, Renny and Dutch 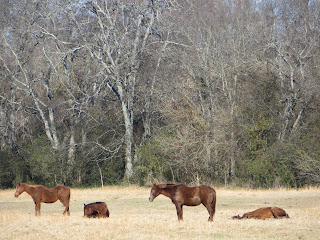 Wiz, also from the line-up above 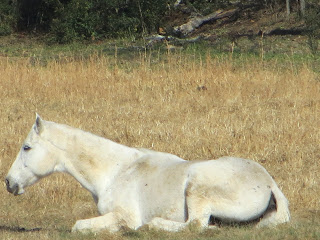 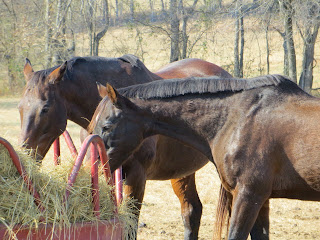 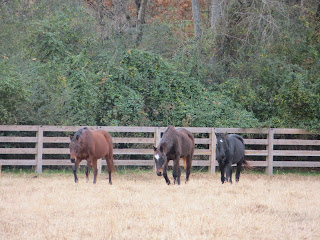 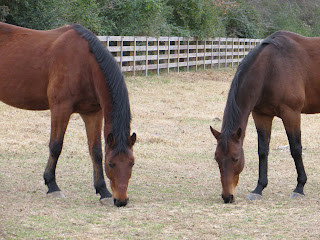 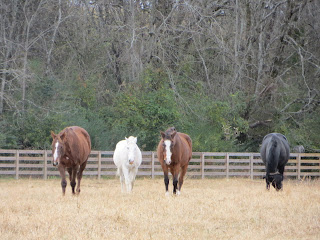 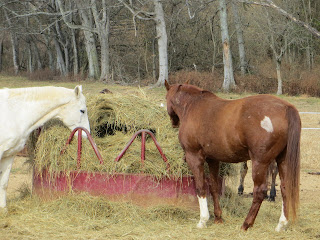 Moe napping on the fence 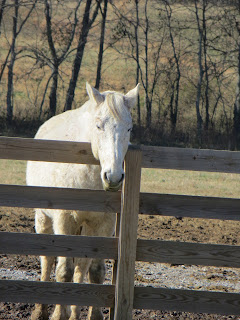 Posted by Melissa-ParadigmFarms at 8:02 PM

Glad you located the offending valves - that must have been so frustrating. :D

I have had a few come-aparts the last week, all due to water issues.

I would mark the location on the fence board. A Sharpie pen has saved me many times!

Apparently Jason was gifted with too much gravel! See Jason, unlimited gravel might not be such a blessing after all :-D

For what it's worth, Melissa, I use the same tactic. Think "fine, you don't want to investigate that gnawing sound in the attic? I will get the ladder and go up." Before I know it, husband is up in the attic, fending off a raccoon. Bwahaha!

I'm with spotz58... if they are all along fenceline like that, I would totally give a quick blue paint square on the bottom board (or on the very top of the top board, if you don't want it to be noticeable... or a blue reflector, like our fire hydrants along rural roads have!

so funny. i'm never right about anything here in my home. i just say the word whatever. no big deal. granny from florida

Yep, mark the board. LOL Been there, done that! maybe an arrow pointing down with wordage "Jason, dig here"? Oh.....too much? :o)